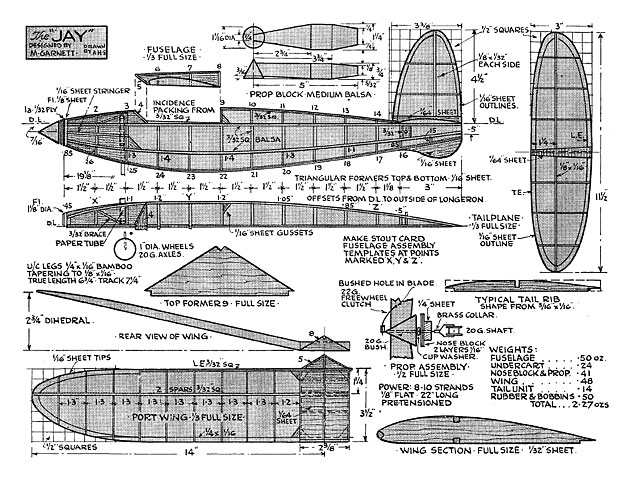 Jay. Free flight rubber sports model. Aeromodeller, November 1942. This is not a full size plan, formers are at full size, general layout is at one third size.

Quote: "FOLLOWING full size practice, this small model is a flying scale model of a Wakefield class model. The small model distinguished itself by having a very good performance, a particularly flat glide, very robust construction (the only damage to date has been a broken propeller blade when the model fell out of a tree onto a road), and above all a really neat appearance. The larger Wakefield was eventually built, and was similar in layout but with an octagonal section fuselage, folding propeller, and internal wing and tail fittings, which were not thought worth while on the smaller machine.

The construction is straightforward, and should present no difficulty to anybody who has built up one of the ordinary slab-sided, high-wing models so popular today. The drawings are pretty well complete, but here is a summary of the building and trimming operations for the newcomers.

Fuselage: First of all, build up two flat sides of 3/32 square balsa on the plan. Then cut out the formers and the three card templates and, slipping the latter into the positions shown on the plan, join the nose and tail of the two sides together. Now add the formers and cross members, taking care to cement the latter thoroughly, as they come in for a fair amount of rough use. Now add the top and bottom stringers, which are also 3/32 in square, and put on diamond fashion, both being in one piece. The outer sides of the stringers must now be sanded down so that they lie in the same plane as their respective formers.

The stringers could be put on flat, but this does not give such a sharp, clean edge to the apex. Now add the paper tubes for the undercarriage legs, making sure these are symmetrical, and then the various gussets and the fixed underfin. Finally, plank in the nose as shown on the drawing, and make sure there are no projections to spoil the surface of the tissue.

Wing: This is best made in one piece and built on the plan. The leading edge and trailing edge and the bottom spar are then cracked and the wing tips lifted up to give the correct. dihedral. The 1/32 sheet spar joining webs are now cemented in place, and also the 1/16 sheet gussets. The centre section formers are now fitted. The top of the centre section is now sheeted in..."

Added article, thanks to Algy2. 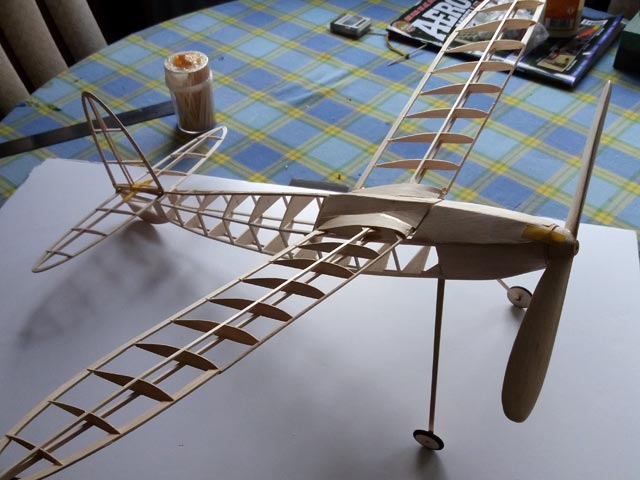