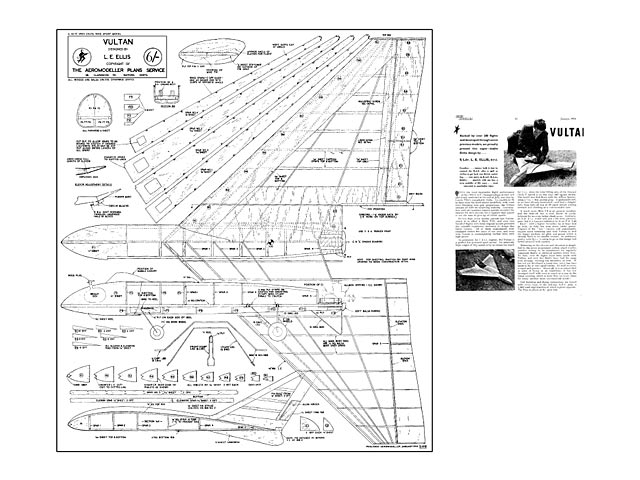 Quote: "Backed by over 200 flights and developed through seven previous models, we proudly present this super-stable delta

QUITE the most impressive flight performance at the 1953 RAF Championships on that wet and windy weekend at the end of July, was that by Laurie Ellis's remarkable Delta. In conditions fit to deter even the most ardent modellers, with wind force breaking into gale proportions, the Vultan amazed all with its surprising stability. Conversation with its Canadian creator quickly revealed the reasons for such success, for it appears that Laurie is not the man to give up at initial upsets.

No less than seven models precede this Vultan, which is in effect a Mark VIII, and over two hundred flights with these original models provided the valuable experience necessary to design this latest version. All of these experiments were crammed within the space of one year, and even now, Laurie is contemplating further tests with high power.

As presented, for 1-2 cc engines, the Vultan is a perfect low-powered sport model. Its relatively high weight of 30-1/2 ounces is by no means too much for 1 cc, since the total lifting area of the thinned Clark Y airfoil is no less than 642 square inches. The model was first flown with the Allbon Spitfire, using a 7 x 4 pusher prop. It performed well, as we have already mentioned - and had a delight-fully long take-off run of 30 yards before coming unstuck and climbing at a commendable rate.

A much worn Mills 1.3 is at present installed, and the take-off run is now about 18 yards, followed by an even better climb away. Similarly, an E.D. 2 cc would add just a bit more performance, but it is Laurie's intention to fit an E.D. 2.46 Racer with a higher thrustline by at least half an inch, to hold the nose down under power. Engines of the hot variety will undoubtedly require extra trimming care with Vultan to find the happy medium for glide and power which is already built-in for smaller motors. So ambitious gentry with 2-1/2 cc's raring to go in this design had better proceed with caution.

Trimming on the elevons and elevators is simplified by the screw adjustment system which enables positive setting to be maintained for regularly consistent flights of identical pattern every time. To date, over 60 flights have been made with Vultan, and very few flights have had the same trim settings, showing the flexibility of trim..."

Update 23/11/2015: Replaced this plan with a clearer copy (patterned background removed) thanks to Circlip. 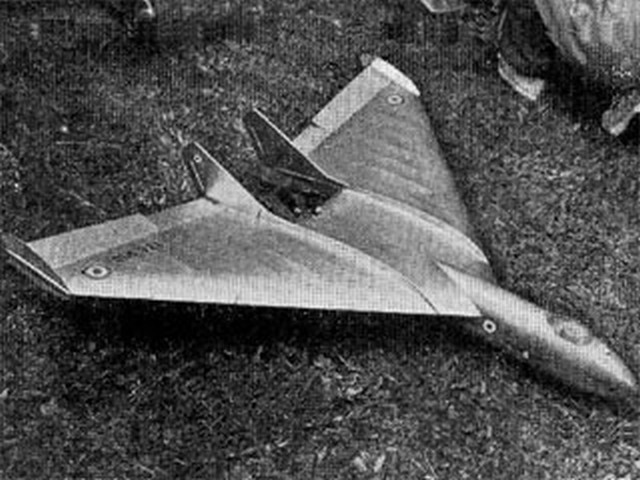