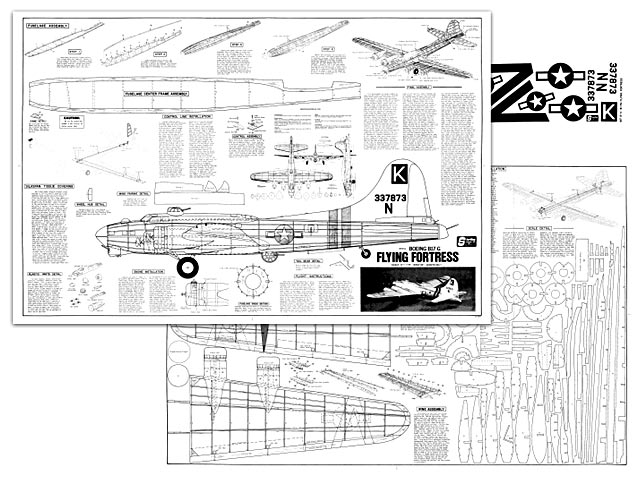 Quote: "Designed and built by Boeing Aircraft Company, the legendary B17 Flying Fortress was 'the guts and backbone of our aerial offensive' as General Hap Arnold put it. The tremendous fire power of its thirteen 50 caliber Machine Guns and the special formation flying, enabled the Squadron to penetrate enemy territory without fighter escort.

Our Model is a faithful and highly detailed replica of the Prototype. Frame members are accurately Die-Cut from finest quality Balsa and every part numbered to insure fast accurate assembly as shown on the Step-by-Step Plans and instructions. 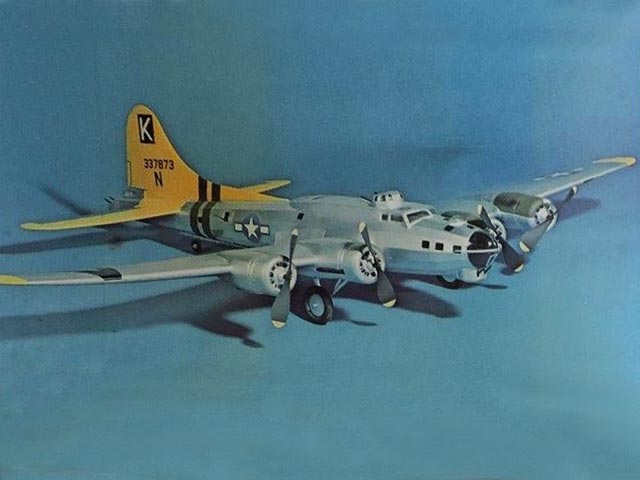 This is the old Sterling Models Inc. Kit E-11 Boeing B-17G Flying Fortress, constructed as a display model [pics 005-008]. Wingspan is 39 inches.
This model represents a B-17G-1-VE of the 526th BS 379th BG, based out of Kimbolton Airfield (RAF Kimbolton) during WW2. The aircraft's name was Blues In The Night and its waist gunner (usually flew with only one on board) was a friend of mine. Blues was shot down on a mission to Berlin, 19 May 1944. Fortunately my friend and his comrades were able to abandon their aircraft and all but one survived the war as POWs.
Construction of the model was not as daunting as the plan might appear. All markings are printed tissue "decals."
Thank you to the folk at Outerzone!
Neal Green - 15/04/2020
Has anybody flown this model with rubber powered? I really don't think it is practical.
Eduardo - 07/05/2022
when I was 14 y.o. this kit was unavailable in Italy, so I innocently wrote to Sterling saying in the kitbox there wasn't the plan in order to obtain it. One month later the plan arrived f.o.c. I built it but suddenly realized it was so tail heavy, due to the big rudder, that it became another Sterling "Flying Brick". Not really flying, just throwing it in the air like in an olyimpic javelin contest. I would like to try again with 2 Cox 020 an light rc as for the plan or better electric. Guillows B-17 is more big and heavy for rubber powered, but has the same dimension of the wonderful Keith Laumer cl B-17 oz214. The only one I think has a flying possibility by rubber is the Joe Ott B-17 oz4077
Pit - 08/05/2022
Add a comment