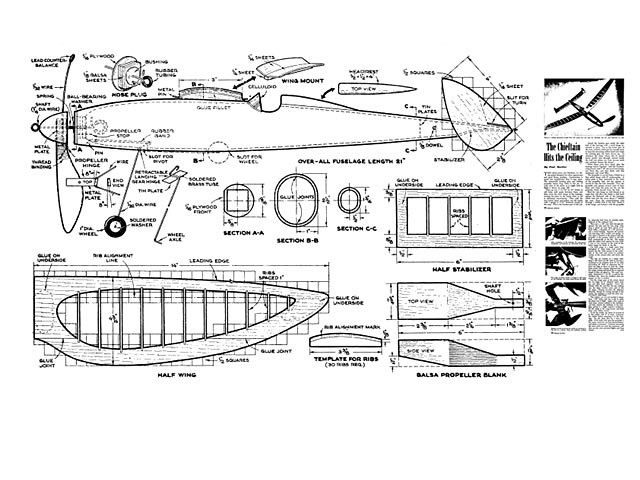 Quote: "Here's a rubber-powered model that will reach out not only for altitude, but for real distance as well. The Chieftain, by Paul Mueller.

THIS rakish plane, the Chieftain, is a flying model designed for clean appearance and good flying qualities. Construction is much less complicated than it may seem. The retractable landing gear and folding propeller lessen drag when in the air. A color shot of the plane as it might look in flight is shown on page 128.

Glue up two 1 by 28 by 21 inch blocks of soft balsa with paper between them, and then carve the outer shape of the fuselage, turning the piece in the hands often to aid in obtaining concentricity. Then split the two halves apart and hollow out the inside with a gouge to 3/32 in thickness except at the nose. This is the hardest part of the job.

Attach the landing gear inside the right half of the fuselage with a small hinge cemented in place. Up in the lower part of the nose, cement a bent pin far enough away to keep the retracting rubber band taut when the landing gear has been drawn up. To reinforce the balsa where the 1/8 dowel motor anchor runs through, cement inside the hull two plates cut from tin-can stock and notched around the dowel.

When these parts have dried, glue the fuselage halves together. Add the headrest, wing mount, and 1/16 plywood nose facing. Let these dry, and then finish with fine sandpaper and wood filler.

The propeller is carved from a blank to a thin airfoil shape with 1/8 in undercamber. A metal plate is then cemented to the front of the propeller hub, and the spinner is carved to take the hub assembly. Give the propeller and spinner several coats of clear dope, and when the parts are dry cut the propeller blade cleanly from the hub.

Bind the wire hinge on with thread at an angle that will allow the blade to fold back against the flattened side of the fuselage, which fairs into the curve about 1 in behind the nose. Press the counterbalance wire through a drilled hole in the hub, clinch it at the hinge, and balance with the propeller..." 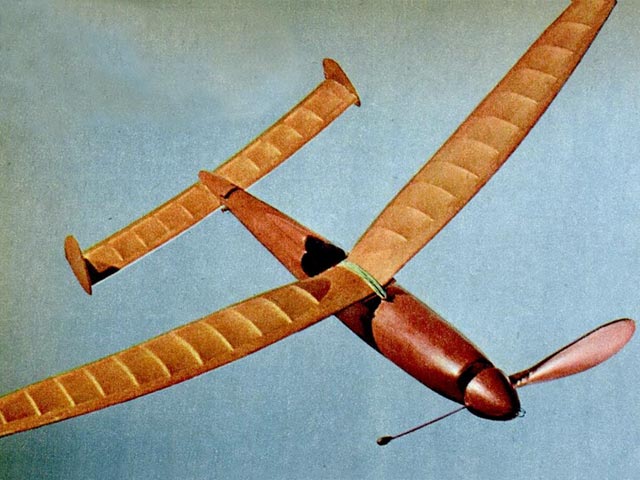