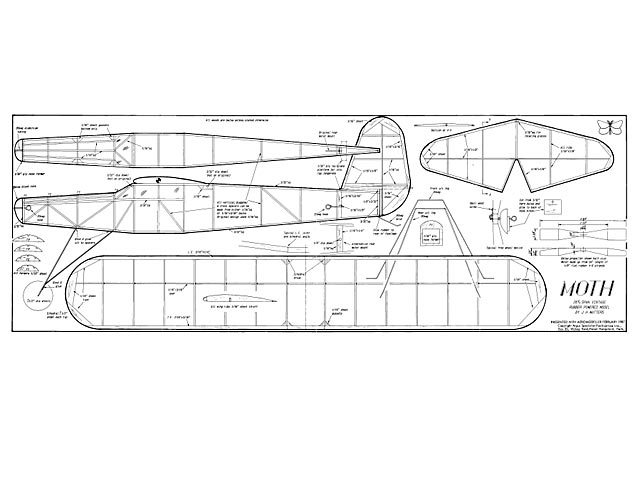 Quote: "THE ONE THING that can be said about 'real' ie. insect-type moths, is that they do not survive for very long, but this cannot be true for this model Moth which first appeared in the August 1937 issue of Flying Aces. This model is so simple and quick to build, it's almost one for a wet weekend, and it isn't going to cost you a fortune in wood either.

As an introductory model for anyone wanting a small, simple vintage rubber type, the Moth is ideal. As the editor's note said about the original design - 'thousands of models have been built, throughout the United States and Canada, and it has been responsible in getting many aero enthusiasts to become model builders'. I have included in this design all of the original features but I have added some small changes to ease construction for the beginner. Purists may ignore these.

Fuselage. Lay out the plan flat on your building board and cover it with a piece of thin polythene sheet. This will prevent any of the parts from sticking to the plan during building. Select the longerons from medium hard 3/32in sq balsa, and pin them down over the plan. Position the pins on each side of the longerons, not through them. The uprights and diagonal pieces can be made from either medium hard 1/16in sq or 1/16 x 3/32in balsa. Remember if using 1/16in sq that the spacers need to be on the outside faces of both side frames. Cut each piece in turn and using PVA glue position each piece to complete one fuselage side.

At this stage it will be best to make up your mind which version of this model you are going to build, the true vintage or the modified model - not that there is a lot between either, but the rear motor anchorage points are different.

Having completed one side, build up the second side directly over the first. Remove them from your board and carefully separate by running a modelling knife between them. Re-glue any joints that may have become loose. As no fuselage formers are used in this model, building up the fuselage box is probably best carried out using dummy formers which can be removed later. These can be made from either balsa or card, and should be only tack glued into place.

Build up the fuselage by gluing the two sides together at the tail and fixing the top and bottom spacers at the nose. When all has set, add the remaining top and bottom spacers, checking all the time to see that the fuselage is true. Formers Fl to F4 can now be added followed by the 1/16in. sq. stringers on top of the nose, along with the two windshield pieces. The original model did not make any provision for locating the nose block, so I included a 1/32in. ply nose former. The nose block itself can be made up either from a piece of medium balsa block, or from pieces of 1/8in. sheet laminated together.

A piece of aluminium or brass tubing, or a bush of some kind for the 20swg. piano wire propeller shaft to run in can then be epoxied in place. This completes the fuselage which should now be given a light sanding all over. The two undercarriage legs are made from 20swg wire, bent to the shapes shown on the plan. Nothing complicated here; simply bind each leg to its bottom spacker using strong thread and cement. Although not specified on the original model, it is probably best to make these two spacers from hard 3/32in sq. balsa with small gussets added. The ends of both legs can either be bound with thread and cemented, or lightly soldered together. The wheels I used were from discs of 1/32in. plywood faced on each side with 1/16in. balsa with a piece of 20swg aluminium tubing epoxied in for the hub..." 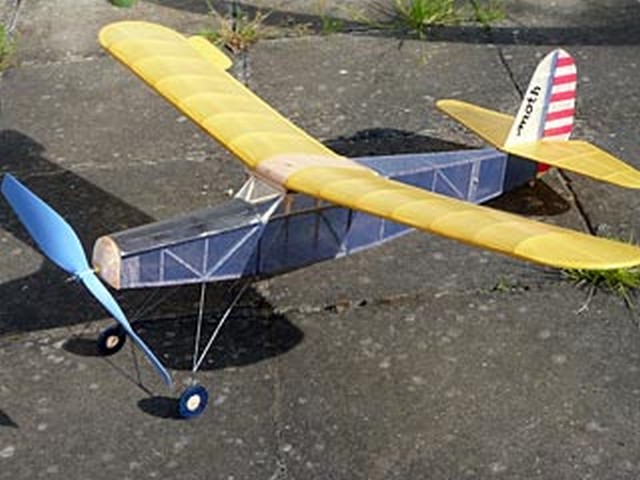 Colour photo of his completed Moth model is thanks to ZdenekHamr [model photo].
SteveWMD - 11/03/2013
Here is an old photo of my Flying Aces Moth, which was built from the no-longer-available Peck-Polymers kit [more pics 004]. It is an excellent flyer. A plastic propeller made it too nose heavy, so I had to carve a balsa prop. I still have the model, and will be flying it this summer.
WalterKiernan - 08/01/2019
Add a comment