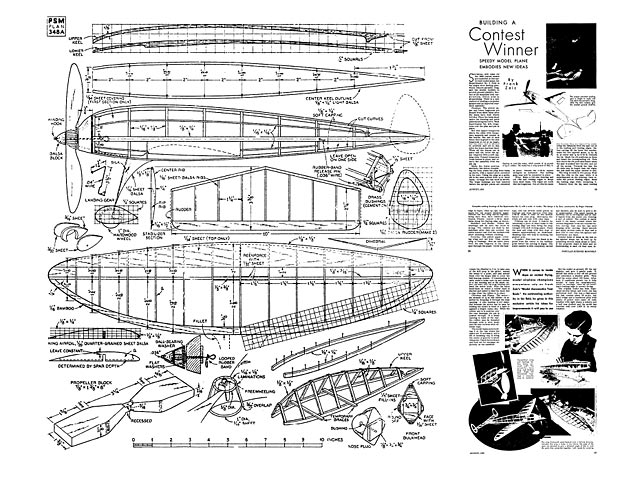 SEVERAL new ideas for the 1938 contest season are embodied in this easily built model plane, the Experimenter No.3. First is the single strut landing gear, which reduces parasitic drag, and the double rudders to provide ground stability. Second is the simplified keel construction, which aids in streamlining. Third is a new method of making a propeller spinner and an improved rear-hook assembly.

Fuselage. The precut up-per and lower longerons are shaped from sheet balsa after the plans have been drawn full size. Place the balsa sheet under the drawing and prick pinholes along the curve. Then superimpose the side longe-rons over the plan and pin in place.

Set the upper longeron above the sides with temporary supports and cement in the braces. The end of each brace that is glued to the side longerons is cut at an angle, but the other end is allowed to protrude and cut to size after the brace has been fixed. When all the braces are in place and cut, cover the upper longeron with a soft cap-ping strip. Cement temporary cross braces in place, and re-move the assembly from the pin jig.

Make the lower portion similarly, but before complet-ing the nose, make the plug from balsa as shown, with a square piece cemented in the rear. Using the plug as a guide, fill in the nose portion with 1/8-in sheet balsa. Arrange the rear hook as shown. The brass bushings are best inserted before the upright pieces are cemented in place. Cement the 1/16-in square stringers as indicated. The landing gear may now be cemented in place.

Wing. Make a full-size drawing and cut ribs and trailing edges to shape from sheet balsa. The edges are made like the longerons. Cut all ribs the same
size because they are tapered by measuring the distances from the spar cut-in to the leading and trailing edges. Before cutting off the lower flat camber, make the two tapered spars, 1/8 x 3/8 at center and 1/8 by 3/16 in towards the tip. Mark the rib positions on them and insert the corresponding rib. Note how much the rib protrudes below when the spar is pushed into the slot, and cut off the excess. Towards the tips, the rib ends may be larger than the edges, but just sand the upper camber to suit.

The wing is made in two pieces. First slip the ribs on the spar while it is superimposed on the drawing; then cement the precut trailing edges. Bend the leading edge while cementing it. Remove from the jig, sand trailing edge to taper..." 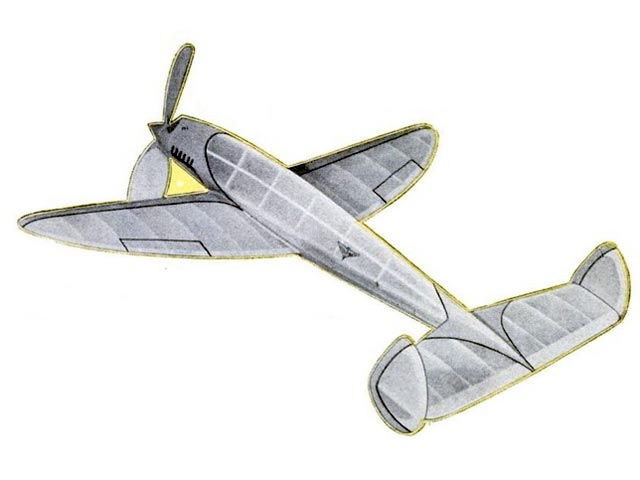