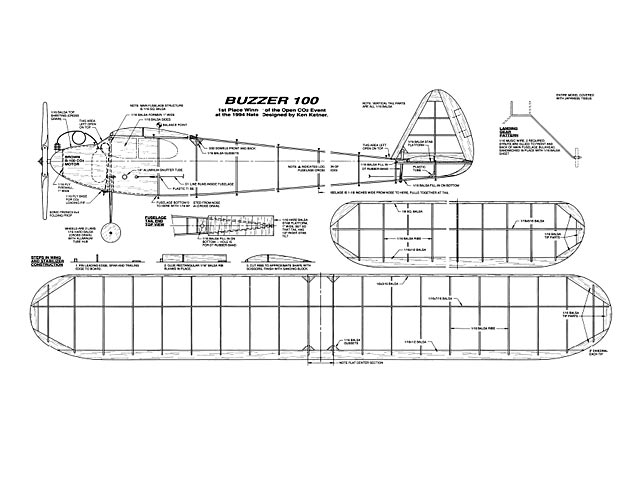 The original Bill Winter Buzzer (oz10025) free flight design was first published in Air Trails Dec 1948. This here is a later version from MB in 1996.

Quote: "An oldie but goodie! The author presents a redesigned version of Bill Winter's 1948 cabin free flight, for the Brown B-100 or similar size CO2 motors. Won 1st place in the Open CO2 event at the 1994 AMA Nats!

Have you dreamed of having a model that wanted to fly away every time, was easy to build, a beauty to view and was powered by a motor that was a cinch to start, made almost no noise, and required almost no maintenance? Perfection is not to be expected, of course, but let me tell you how I came close to this ideal.

A new Brown B-100 CO2 motor - factory serial number 363 - arrived at my Lubbock, Texas mailbox a few months ago. (It's part of the fun to 'send off for things' and to have them appear miraculously!) After a couple of test runs I could see that it was a little jewel, so I began to search for an airframe that would be its equal. I happened at the time to be reviewing my favorite older model magazine, Air Trails, especially issues from the late '40s and early '50s. I particularly love the full-size plans they put in almost every issue. On page 50 of the December 1948 issue, I stumbled upon the ideal ship, the Buzzer, designed by none other than the old master, Bill Winter, and with a fold-out plan!

In 1948, Bill Brown, the powerplant genius, released his CO2 motor through OK-Herkimer. Brown's Campus Industries had also introduced the smaller Campus A-100. Not to be lost in the CO2 boom, Polk's Hobbies, which featured a line of gas engines under its 'Buzz' trade name, produced the Buzz CO2 motor, which had a bore of 3/16-inch. Winter's Buzzer was designed for the Buzz motor, and Bill Brown's new B-100 looks to be about the same size.

With that thought in mind I photocopied Winter's Buzzer plan, then set about modifying it for my B-100. I planned to install a dethermalizer and make a number of other modifications while using some innovative construction techniques I had been developing. The result is a ship that is easy to trim and won't stay on the ground. The airframe and motor are a beautiful pair-ing. Mine has flown away twice; only luck, and the help of my clubmates, the Latex Rangers (Flying Aces Club Squadron No.25), brought it home in one piece.

BUILDING THE BUZZER 100: The plan is printed on both sides of the magazine centerspread. One side includes both wing panels and the horizontal stab; the other has the fuselage, which is too long to be shown in one piece. Build the wing and stab first, then cut and splice the plan as shown to make a complete fuselage profile drawing. 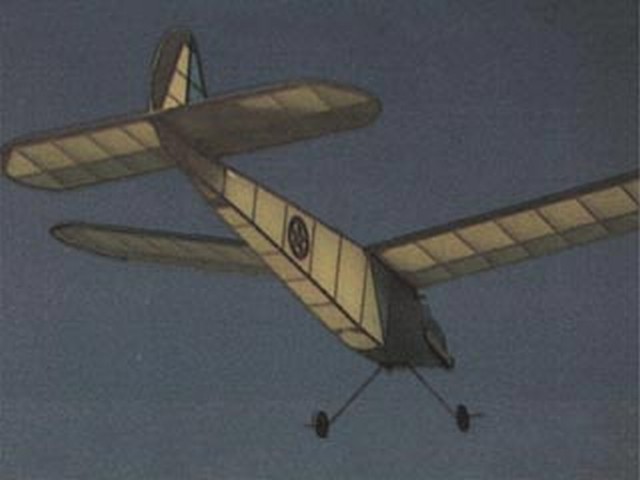