THE NIEUPORT 11 first saw service in 1915 with the British and French air forces. It was also used extensively by the Italians and Russians. A popular aircraft, thanks to its manoeuvrability and rate of climb, it did have an unfortunate habit of losing its lower wings. The Nieuport was armed with a stripped Lewis gun mounted on top of the upper centre section, firing clear of the airscrew arc.

The aircraft depicted by this model served with the Escadrille Americaine, more commonly known as the Lafayette Escadrille, and the Indian Chief insignia provides a colourful finish to this attractive aeroplane.

The Nieuport II was chosen as my first attempt at designing a CO, scale model because of its relatively simple outlines and sections and good proportions. The dihedral on the lower wings compensates for the absence of any on the upper wings; indeed, the model flies stably in tight, left-hand circles at small indoor venues. The turn can be opened out for a more realistic flight pattern outdoors on calm days.

Construction is straightforward, but as always, it is imperative to build lightly, particularly the tailplane and fin. The tail surfaces could even be built out of 1/20 wood.

Start work: Basic construction follows the time-honoured method of building two sides over the plan using 1/20 sq for the basic framework. 1/20 wood is about two-thirds the weight of 1/16in, but as there is no rubber motor torque to withstand, it is of ample strength. Do not omit the sheet infill on the first bay of the fuselage, the diagonals in the rear fuselage bays (spring in the curved lower longeron would distort the straight, unstressed upper longeron) or the 22 swg front cabane struts wire. Make up F4 and F1 (ensuring motor mount positions are marked) and join fuselage sides. Add remainder of spacers, sheet infills and top decking formers. Sheet the top decking from F1A to F3A, cutting out the cockpit when dry, and add rear stringers, ensuring that they are parallel to each other. Before adding the cowl and engine mount, cut a hole in F1 and F1A to allow the pre-bent CO, tank and filler nozzle assembly to be fed through from the front. Thus the whole power unit is accessible for maintenance when the model is completed.

The cowl sides may be formed from soft 1/16 sheet or two laminations of 1/32 with the grain running fore-and-aft. Subsequent assembly is easier if the cowl is formed wet around a suitable former and allowed to dry. C3 and C4 are joined as shown by three pieces of 1/16 x 1/18 strip. When dry the cowl sides are glued on. Make up the motor mount, ensuring the 1/16. sheet mount supports are cut accurately to give correct down and side thrust. Note how the mounting holes in the 1/32. ply mount are offset so the propeller hub is in the centre of the cowl. C1 and C3 can be added to the cowl and the complete assembly glued in place. Sand the front of the cowl to the correct shape and trim the lower edges of the sides to match the lower fuselage contour and the shape of C1.

Add the rear fairing blocks to the cowl, noting that the upper surface is rounded, whilst the lower part is a flat surface, simulating an air exit on the prototype.

The front centre section strut fairings are now added, followed by the rear inverted 'V' struts. Make sure the correct incidence is built in. Insert a short length of 22 swg wire into the apex of the rear struts and secure with cyano.

Wings next: The wings are of straightforward construction, but the following points should be noted. The wing tips are laminated out of two strips of 1/32 x 1/4 strip. Once assembled most of this is trimmed away, leaving a shape following the camber line of the tip aerofoil section.

Note the packing required under the top rear spar and the lower wing spar. The outboard upper wing ribs are all cut to the R1 profile and trimmed and cut as required. This builds in a measure of washout to the ailerons. Add reinforcing gussets where shown, but do not cut through wing tips at aileron locations until after covering and doping. Add short lengths of aluminium tube at strut locations and secure with cyano, ensuring tubes do not become blocked. Add pieces of 1/32 sheet around the aileron crank locations and sand to follow aerofoil contours. Carefully insert and glue the fuse wire aileron hinges. Don't glue the aileron to the rear spar! Add the lower wing locating dowels; mark the position of the receiving tubes on the fuselage sides with template to guarantee equal incidence. Tilt the root ribs for dihedral. The sweep angle of the lower wing root ribs does not quite match the taper of the front fuselage. As drawn it should ensure that the interplane strut location is correctly positioned due to the effects of incidence and sweepback angles. My prototype needed extra packing on the root ribs to correct this!

Tail feathers: The tailplane structure is straightforward, but do use light wood. I used 1/20 balsa. Extra care is then required when fitting the elevator hinges. The rudder outline is laminated; thicker fusewire should be used to hinge it, for the relatively large surface is easily deflected if the model cartwheels on landing.

The cover-up: Before covering, assemble the wings and interplane struts, checking for accurate locations and correct dihedral and incidences. It is easier to remedy errors at this stage.

I covered the entire model with silver-grey tissue (obtainable from SAMS Model Supplies), water shrunk and doped with non-shrinking banana oil to minimise warping. All surfaces (except rudder) were lightly sprayed with Humbrol aluminium enamel, but the rounded positions were masked off with discs of masking film. This latter point is important, as metallic paints have a tendency to leach through if subsequently painted over. Roundels were drawn using a lining pen fitted into a pair of compasses to create outlines, the colours being painted on when dry. The 'Indian's Head' insignia was traced on to a sheet of clear waterslide transfer film and the colours filled in. Note the Indian faces forwards on each fuselage side.

The perimeter of the flying surfaces and the fuselage longerons were outlined in a 1/16 wide strip of black paint, again using a lining pen and ruler with a careful free hand on the curves. (And steady nerves. GC).

Get it together: The model can now be assembled and rigged with fine nylon monofilament thread attached to small aluminium strip lugs inserted into the structure at the strut locations. The undercarriage is then bent in halves and cyanoed directly to the lower fuselage. Bend the wire so it is naturally set for a slightly wider track than indicated; it is then pulled into the correct position by the bracing wires. This ensures a rigid structure. The wheels are constructed from rubber tubing around a central disc of 1/8 hard sheet. They are bushed with aluminium tube and notepaper cones added. Fair the axle with 1/16 balsa to the shape shown and insert into guide in the undercarriage struts, ensuring a sliding fit. Attach the axle keepers and spring the axle with shirring elastic 'bungees'. The tail skid is constructed from soft 1/8 balsa and a small strip of thin spring steel. I cut mine from a razor blade using a carborundum disc in a mini drill.

The dummy engine is constructed as shown on the plan. On the prototype only four complete cyclinders are visible, so the fitting of dummy valve gear is not so daunting a prospect as you might think. The dummy engine is slid over the CO2 motor crankshaft and fixed in position by a single screw into the CO2 motor mount. It can then be hidden in flight by a dummy pilot.

The exciting bit: Ideally, carry out initial trimming outside on a calm day. Walls and floors tend to be unforgiving?

The model must balance as shown on the plan. Set a small amount of left rudder and raise the right aileron 1/16 at the trailing edge. Give the motor a gas charge and allow it almost to run through before launching the model in a powered glide over the traditional long grass. Correct trim in pitch with the elevators and adjust turn with rudder. The rudder deflection should be checked before every flight by sighting along it and noting where it lines up along the upper wing centre-section. Increase the motor power gradually, ensuring that a consistent left turn results. Any tendency to overbank can be corrected by raising further the right aileron. However, if the left turn opens out as the power reduces, more tight thrust will have to be added and the rudder readjusted. The wide track undercarriage ensures smooth, realistic take-offs with no ground looping. The model is stable in flight, if a trifle on the fast side for scale speed, but it flies consistently for 30-45 seconds on a medium Telco motor power setting." 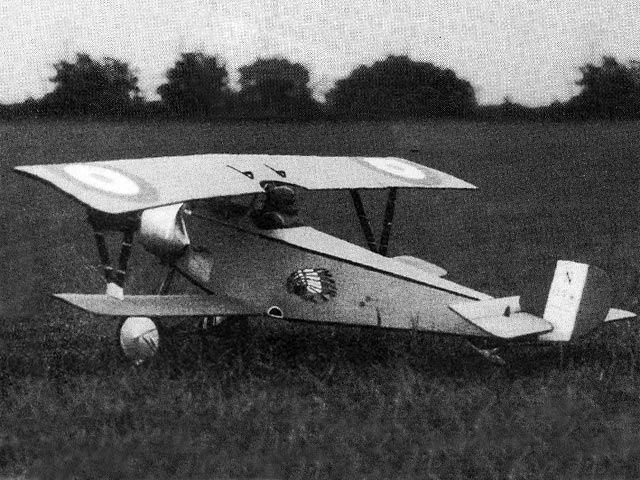