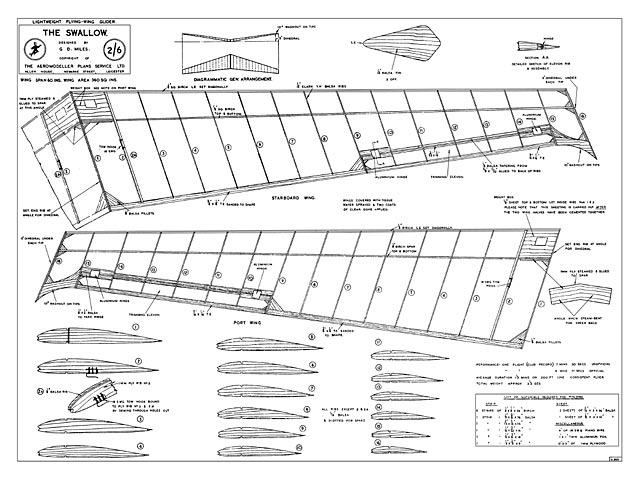 MODELLING tyros anxious to make their first attempt at a flying wing design will find the Swallow 'just their cup of tea', with the additional attraction of a model that soars like a bird and no complicated trimming procedure to worry them. Seven minutes thirty-seven seconds from a three hundred foot line and a further time yet to be ratified as a British record should more than satisfy any doubts regarding performance, so here are the building instructions as specified by the designer.

Building Instructions. The ribs are first cut out of 1/16 in medium balsa, and slotted for spars. The tip rib is thinned down so that the top spars, lie level. The wing is then constructed in the usual way, making sure the ribs are set right. The trailing edge packed up with balsa to suit rib shape.

Whilst the wing is setting, the elevon is built inside it. The dihedral brace is steamed to the requisite angle and glued to the spars with Casco cold water glue. The brace also acts as the back of the weight box.

The washout is steamed in whilst the wing is pinned to a board. Insert 1 in blocks under the tips at the trailing edge. The model is then covered in tissue and given two coats of dope. Slots are cut for the-tabs, and the elevon is fitted.

Trimming. My own model flies with one tab level and the other up 1/16 in for turn. The model should be weighted until a flat glide is obtained. Weight should be evenly distributed in each box. If the model is required to turn, the elevon inside the turn should be up. The model, once trimmed, is very stable and is recommended for the beginner.

Update 24/07/2015: Replaced this plan with a clearer copy (patterned background removed) thanks to TonyP. 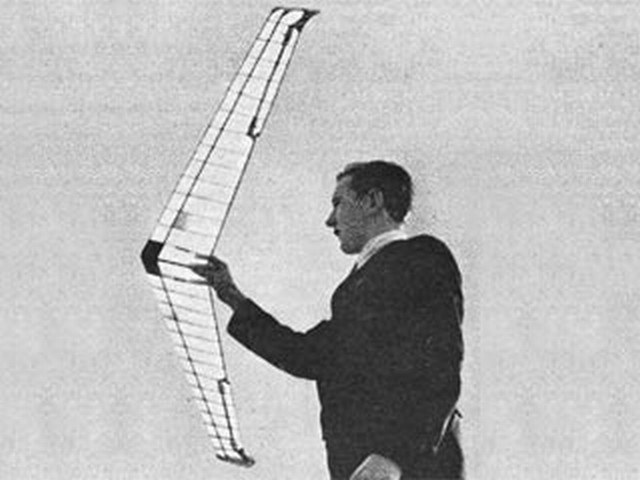 Nice little light glider. Might make for a fun evening flight RC glider with micro hi start. Will have to do some calculations as there is no CG noted on plans or supplement.
Jim Vanderzyl - 21/04/2020
Added some nice pics of the finished model, thanks to Doug Forbes [more pics 003-005].
Mary - 22/05/2020
Add a comment