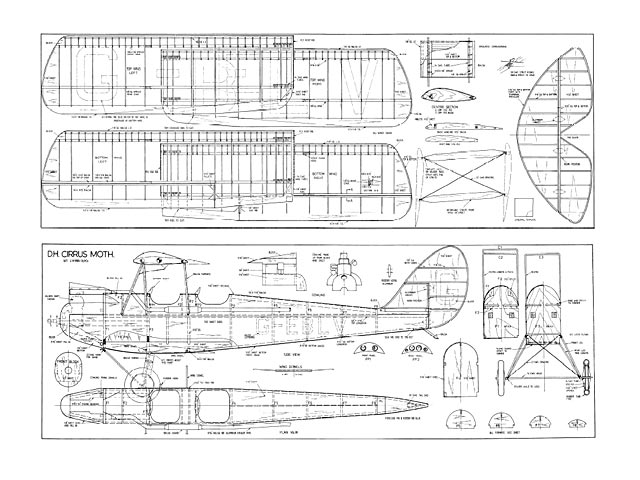 IN LOOKING FOR a new lightweight four cylinder engine, Captain G De Havilland used half of an existing French Renault eight cylinder engine, remodelled it and christened it 'Cirrus.' Always a glutton for work De Havilland designed the DH 60 biplane to house the new engine. Captain de Havilland also had a keen interest in moths and butterflies. As most moths fold their wings back when at rest, De Havilland arranged for his DH 60 to do the same. Putting a name to his new aeroplane was then ready made - thus the 'Cirrus Moth' was evolved.

The model is based on the aeroplane often seen with the Shuttleworth Trust Collection and has been kept as true to scale as possible, with no increase in areas. Construction techniques are straightforward, and mainly follow those described by Eric Coates in his 'Flying Scale Models' series of articles. Additional scale details can be obtained from the scale drawings in Plans Pack 2705 available from Aeromodeller Plans Service.

Wings: Make all the wing ribs and riblets from hard 1/32 sheet by the sandwich method cutting out the spar holes before shaping the ribs. The ribs are slid onto the spars to their correct position and the spars pinned down over the plan, letting the ribs into the trailing edge. The wingtips are built up from 1/32 sheet with 1/16 sq strips on either side, curving the strips by nicking the inside of the strips with a thumbnail or razor saw. The interplane strut hooks and wing dowel tubes are epoxied to the spruce spars. The ailerons should be built as separate items, then glued to the wings afterwards. The wing centre section (which is also part of the fuselage) should be constructed with care and it is important to check that the wire parts are formed accurately and assembled square.

Tail surfaces: The tail and rudder construction are from 1/32 stiff sheet (light quarter grain rather than having straight grain!) the shapes being marked off from the plan with the spars and ribs marked on both sides. The structures are then built up on both sides of the sheet and sanded to section when dry. The curved 1/16 square edges are best formed like the wingtips by nicking the inside edges with the thumbnails or razor saw.

Fuselage: The fuselage is simply a box section con-struction with longerons and spacers. First construct two identical sides by building one on top of the other. Cement formers Fl and F3 in position (the formers should already have the undercarriage, cabine wires and tubes attached) along with the engine bearers. The shaping of the engine bearers comes about from initially choosing an Allbon Dart 0.5 cc engine as the power unit, but not knowing whether this would have sufficient power, I made allowance for the fitting of a Mills 0.75cc.

The two fuselage halves can be joined at the stern post and the remaining formers and spacers added. Sheeting to sides, top and bottom can now be added and the nose area built up using sheet and block. The cowling is best built up by spot gluing the formers and block to the fuselage and shaping to fit the nose area, with the exhaust being made either from balsa or aluminium.

Finishing and flying: The fuselage should be clear doped or sealed with sanding sealer and sanded smooth. The whole model was covered in lightweight tissue and doped with thinned-down dope (1 part dope: 1 part thinner). The colour scheme was applied by spray gun as this method gives very good results for very little gain in weight, providing you give a number of light mist coats. The rigging and control wires are made from nylon fishing line and the rigging attachment points from solder tags epoxied into the fuselage and wing centre section. The lines are fixed to the tags by looping through the hole in the tag and fixing with small pieces of aluminium tubing crimped flat. Loops can be made at the interplane struts end, by the same method.

Whether by good luck or good judgement, no ballast was required to obtain the CG position. After test gliding over the pro-verbial long grass, a low powered test hop showed a slight stalling tendency under power, this was cured by a washer under the rear engine lugs. This also showed that the Dart had quite enough power. Further powered flights proved that the model did not have any hidden vices and circled naturally to the left. I hope your model provides you with as much enjoyment as I have had from mine."

Update 20/01/2014: Replaced this plan with a clearer version thanks to RogerClark.

Quote: "Here is a repaired version of J Watters' Cirrus moth, with the missing section on page 2 repaired. The only guess I had to make was that the interplane struts are 1/8in thick; but 8 is the only likely digit to fit what is left on your current version of the plan." 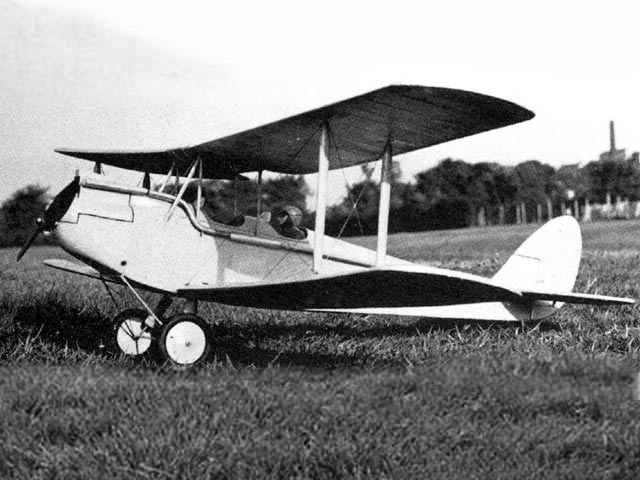