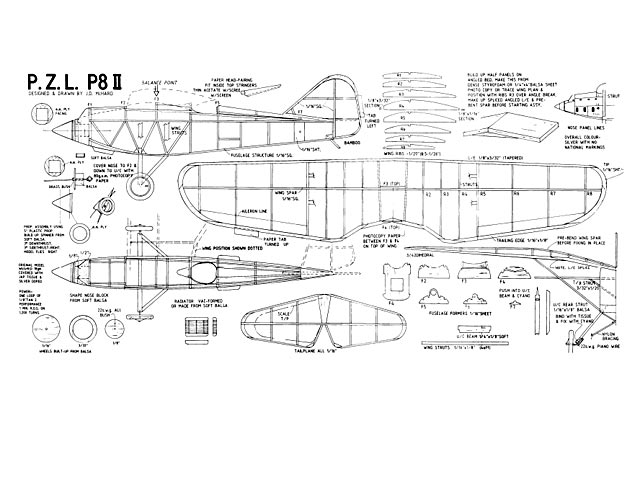 Quote: "A 16 inch span scale model of this interesting aircraft by Doug McHard.

This example of Doug's excellent photography shows 'authentic' Polish markings on an aircraft which never carried them. Note the uneven position of the wing markings and the white stripe denoting a squadron leader.

When I started building scale model aeroplanes in the late '30s, the standards of quality and class varied from the superb (Comet, Peerless) to diabolical (Astral, Drome). From building many of these inexpensive 16 in span models we learned about good design and bad design - where to build in strength and where we could save weight. A newcomer to our hobby can derive the same enjoyment and develop his skills just as well today as we did nearly 60 years ago by building and flying well designed 16 inchers. I always thought it a pity that the original Peanut promoters settled for a 13 in wingspan. The larger model will fly in the same indoor area, but will also perform really well out of doors on a calm evening. The construction is not quite so demanding and trimming is certainly less critical.

For these reasons, have chosen to make this model to the larger size and tried to capture the spirit of those early kits, with perhaps a little bit of sophistication thrown in - but not too much!

I have simplified the design a bit, but the vital personality of the original aeroplane has not been lost. It is a super subject, and yet this elegant in-line engined prototype with its long nose and slab sided fuselage has been neglected by modellers in favour of the snub-nosed radial engined production machine. The longer nose means that little or no ballast is needed, and if you keep the weight to less than 20 grams, an 18in loop of 1/8 Tan 2 will give you over a minute duration. By careful choice of materials, you can build down to under 7 grams without difficulty, For balsa I use indoor grade 'Super strips' from SAMS Models. Although expensive, you use so little that the 'per model' cost is not prohibitive, and if you've never built from real contest balsa, the strength and lightness will be a revelation to you!

The detailed plan and photographs contain all the building information that you will need. One or two points should however be borne in mind. After making up the angled wing-building 'board', photocopy or trace the wing plan and place it over the board, being very careful to ensure that rib R3 is exactly lined up over the angle break. The PZL gull wing is particularly elegant, but models of it often have an ugly, angular appearance. The reason for this is that the upper surface is not cranked shaply at the angle break, but is an almost continuous curve from root to outer panel. Also the thickest of the wing does not come at the widest chord! It occurs at the strut attachment rib which is well outboard of the underside crank and it gives the wing its graceful shape. The 1/16 sq top wing spar was moistened and pre-bent over a hot surface before being glued in place. (More details of this technique will be found in the July 1994 Aeromodeller.)

All the photos of the original aircraft I have seen show an overall aluminium finish devoid of all individual markings. My first attempt at this model was finished in this way. It was covered with Martin Dilly's super light white Jap tissue, steam shrunk, then given one coat of thin low shrink clear dope and then a dusting spray of very thin aluminium dope. This simple treatment certainly emphasises the interesting shape of the aeroplane. The second model built to the revised and more accurate drawings printed here, covered with dark green Jap tissue (SAMS 'New Jap') on top and light blue underneath; again, with one coat of low shrink clear dope.

The individual markings are, of course, spurious, but represent the machine's likely appearance had it ever seen active service. Because no coloured dope was used on the model black tissue can be used to apply surface detail. Very narrow strips can be cut with a new blade against a steel rule over a sheet of plastic. The black tissue is held in place on the model and very thin dope is carefully brushed over it and gently rubbed down. It's quick, easy, and mistakes can be instantly corrected.

The original model was trimmed to fly in right hand circles. Use right sidethrust to obtain the power-on turn and moderate the resulting bank by using a little acetate or paper tab turned up on the left wing. A small tab on the rear of the rudder turned slightly left will keep the nose well up in the right turn and avoid dangerous spirals." 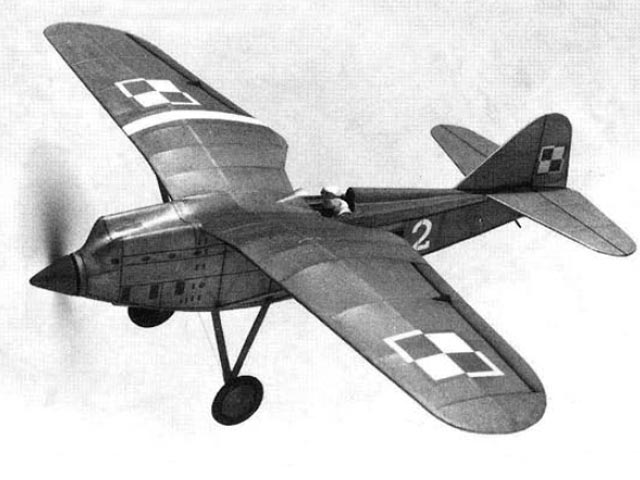 Dear Steve, I was surprised to find that the McHard PZL was published by the Aeromodeller in 1995 because I bought the original at the Hendon auction of Doug's models some ten years ago without really realising what it was! Anyway as the pictures show [see more pics 004-006] it's beautifully made and as the article says incredibly light. I do intend to fly it now but not before I've replaced the original rubber.
RichardFalconer - 28/07/2014
I have build and successfully flown the model based on the plans by JD McHard I could get via your web page. If you find it worth it you could publish the attached photos [more pics 007-011].
MichalKaja_Warsaw_Poland - 07/08/2018
Add a comment