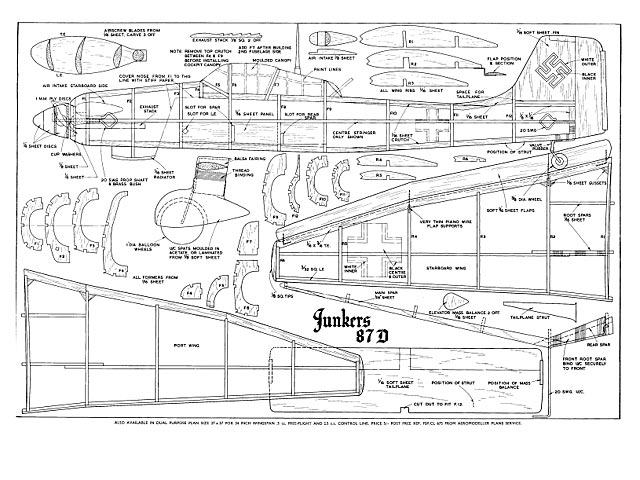 Quote: "A 17in span rubber driven F/Scale Model as on the cover. Also available as a 34in span .5 cc Free Flight power model and 2.5 cc Control line scale model.

DURING RESEARCH for the drawings for this month's Aeroplane in Outline, the author became fascinated by the possibility of producing a flying model of the Ju.87D. A diesel powered model was envisaged, but owing to the lack of time and desire to reassure himself of the feasibility of the type as a flying model, a small rubber powered model was first produced. This flew so well that it is here presented as a full size plan. For those who would like to make an enlarged (twice-size) power driven version, die-line prints of a 34 in span design are also available, price 5/- from APS.

First remove the plan pages from the magazine and cover with thin greaseproof paper and begin construction with the fuselage. Lay down with 1/8 x 1/16 in keels and to them cement the left hand halves of the formers except F7, which is added later. Make sure these are quite upright and add the 1/16 square stringers. Fill in between the stringers at the wing root with 1/16 sheet and cut the slots for the mainspars and wing leading edge. When thoroughly dry remove this assembly from the plan and bind on the tailwheel strut and rear rubber anchorage hook.

Repeat the procedure for the starboard side, cementing formers to left fuselage side. Add stringers and former F7. Add the noseblock and bend some soft 1/16 sheet around the underside of former F2, to form the radiator. Cover the nose with cartridge paper as shown in photo of uncovered frame-work.

Make two wing mainspars from firm 1/16 sheet as shown in front view. Don't forget to make one left and one right-hand spar, the root spar being cemented behind the outer spar. Lay the outer spars on the plan and build up the wings from tip to ribs R2. Note angle of R2 on spar front view..." 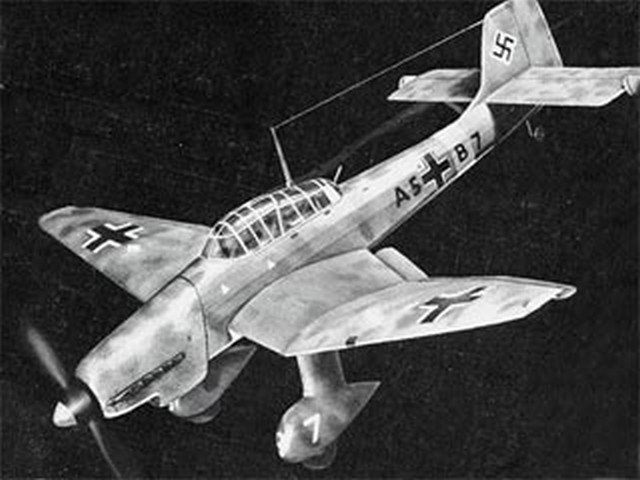