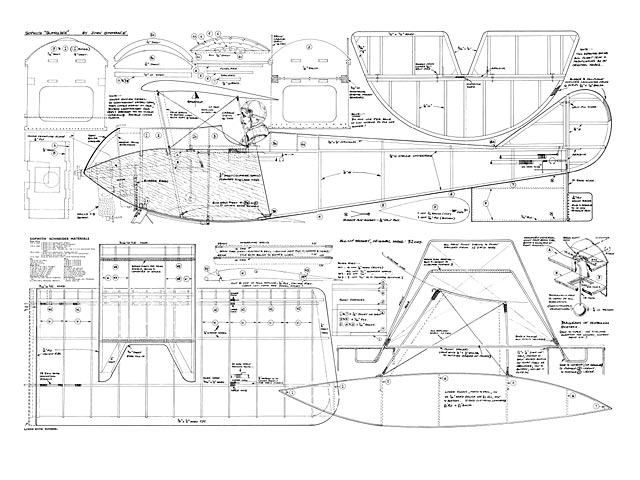 Quote: "FROM time to time I have been aware of a sneaking desire to build a model boat. Lack of time and loyalty to aircraft have always led to the early demise of such notions in the past, though I suspect that they have finally won through in the compromise offered here! This is the 1914 Schneider Trophy wining seaplane; a variant of the well-known Sopwith Tabloid, usually simply known as the Sopwith Schneider.

Sopwiths are generally remarkable for being, by and large, ideal prototypes for the scale modeller: the Schneider is no exception, The simple, generously dimensioned fuselage is big enough for light radio gear, the 'warping' wings are encouragingly simple and pleasantly devoid of ailerons and the empennage is also extremely straightforward and easy, The floats demand a bit more in the way of attention perhaps, as they need to be robust to say the least; but one nice surprise is that in the course of normal airfield flying, superb landings can be made on grass, long or short, wet or dry, without the usual somersault and consequent possibility of fin and rudder damage that we have come to accept as a normal hazard with short-nosed scale models of this vintage.

Trimming flights were approached with some trepidation; the floats seemed so enormous that the possibility of the model actually flying seemed ridiculous! However, after a little initial trouble with thrust lines - I had to remove a good deal of down-thrust as I had not realised the compensating effect of the drag of the floats - trimming progressed rapidly, with all flights being made R.O.G. from a simple three-wheeled dolly. Only subsequent adjustments necessary were made to the tail surfaces, via the built-in adjusters in the pendulum control linkage.

Construction. Commence by cutting out the 1/8in sheet forward fuselage side panels. Pin these to the plan and complete the fuselage sides by the addition of 1/8in square spruce longerons and spacers, built on the plan direct, in the normal manner for fuselage box frames. Construct the pendulum control components, cut out all fuselage formers and mounting plates, fitting the pendulum and yoke assembly to mounting plate A, Make the cabane struts from 16 swg wire..."

Article pages, text and pics, thanks to stormin. 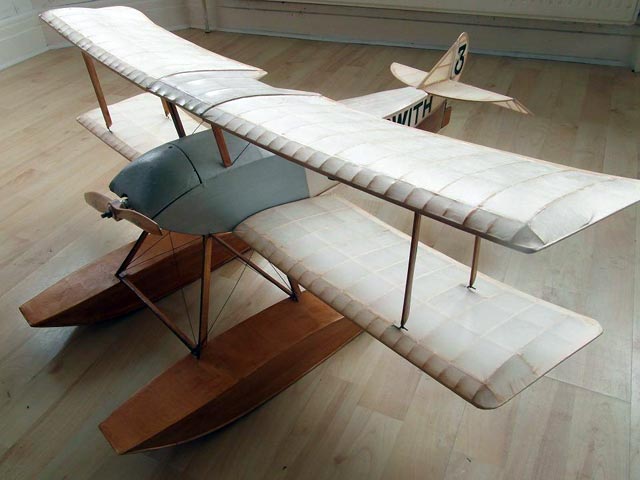 I remember building one of these from these very plans back in about 1969. I rarely stick to plans slavishly so I built it as a control line model with a Taipan 2.5cc engine - well, it was a racing aircraft, after all. Flew it off water and all :) It actually flew pretty well, though somewhat slowly. It was surprisingly tall compared to the stunters and combat models I usually built at the time. I never throw plans away, so I've still got them, somewhat battered but intact.
IanC - 14/10/2016
Some pics of my Sopwith Schneider model [main pic, 005, 006].
Gino - 15/03/2021
Fabulous work Gino! Did you use diesel, nitro or electric? Is it RC or FF.
Thanks
Dave - 16/03/2021
Virtually all construction is as per plan, but converted her from pendulum controls to RC and installed an electric motor.
Gino - 17/03/2021
Beautiful construction throughout!
Jan Novick - 17/03/2021
Add a comment