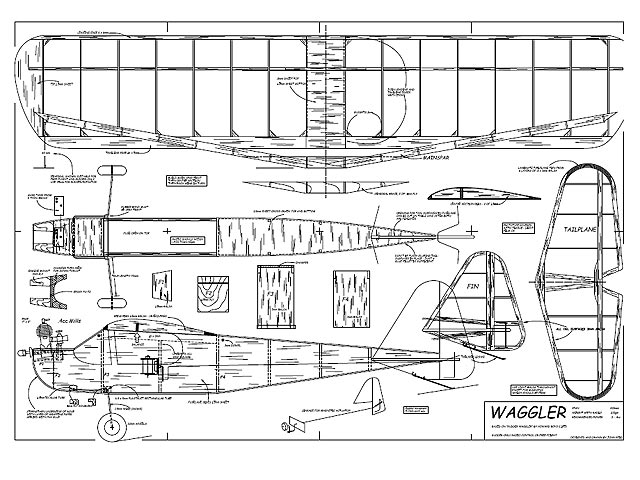 Waggler. Rudder only RC model for .3-.4cc power. This is a modern plan, based on the 'Rudder Waggler' design by Howard Boys.

Quote: Howard Boys was best known to me for his monthly column on radio control in Aeromodeller throughout the 1950s. While the rest of the world used bang-bang escapements and heavy vacuum tubes, Howard used proportional rudder control by magnetic actuator, and gas-filled tubes which were lighter but more difficult to use. Howard's planes were smooth flying and smaller than the norm usually powered by a 1.3cc Mills.

The magnetic actuator constantly pulsed the rudder from side to side and I believe he called his model Rudder Waggler. In the 1970s Ace RC in the US brought out a very light system (about 2 ounces) that worked on the same pulse proportional principle as Howard's. Then in the 90s Dave Banks sold .4cc replicas of the .75 Mills. That was the combination I needed for the plane in the photo, a scaled down version of Howard's model. I drew the outlines from a small sketch in Aeromodeller. There were no construction details so that is guessed.

My model is consistant I think with the spirit of Howard's original. The little Mills replica is quieter than most electrics, a soothing purr. I have clocked up many hours of happy flying with it.

Model Flyer magazine published my drawings full size 8/2002 but managed to make a dreadful mess of them. I think they might still advertise the drawings for sale but goodness knows what they are like. 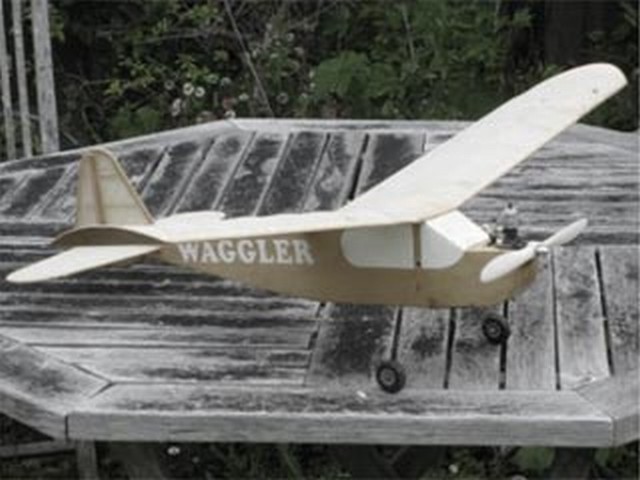 Hello, thought you may like to see my Waggler built from an Outerzone plan [more pics 003]. .4cc David Banks diesel powered. Two channel RC. Thanks for the plan.
RodMcKiggan - 20/09/2017
Add a comment