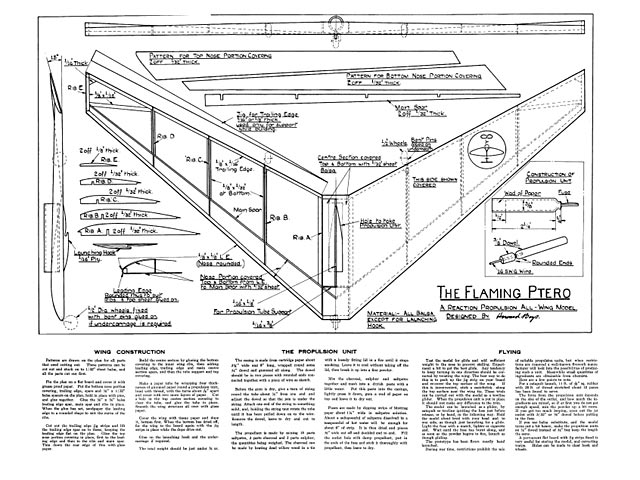 Text includes full instructions on how to build the rocket unit, and to make up your own propellant using saltpetre, charcoal and sulphur.

Quote: "WING CONSTRUCTION: Patterns are drawn on the plan for all parts that need cutting out. These patterns can be cut out and stuck on to 1/32 sheet balsa, and all the parts cut out first.

Pin the plan on a flat board and cover it with grease proof paper. Put the bottom nose portion covering, trailing edge, spars and 1/8 x 1/32 balsa spacers on the plan, hold in place with pins, and glue together. Glue the 1/8 x 1/8 balsa leading edge spar, main spar and ribs in place. When the glue has set, sandpaper the leading edge to a rounded shape to suit the curve of the ribs.

Cut out the trailing edge jig strips and lift the trailing edge spar on to these, keeping the leading edge flat on the plan. Glue the top nose portion covering in place, first to the lead-ing edge and then to the ribs and main spar. Thin down the rear edge of this with glass paper.

Build the centre section by glueing the bottom covering to the inner wing ribs, then adding leading edge, trailing edge and main centre section spars, and then the tube support and top covering.

Make a paper tube by wrapping four thick-nesses of gummed paper round a propulsion unit, bind with thread, with the turns about lir" apart and cover with two more layers of paper. Cut a hole in the top centre section covering to clear the tithe, and glue the tube in place. Smooth the wing structure all over with glass paper.

Cover the wing with tissue paper and dope it, bottom first. When the bottom has dried off, fix the wing to the board again with the jig strips in place while the dope dries out. Glue on the launching hook and the under-carriage if required.

The total weight should be just under 1/2 oz.

THE PROPULSION UNIT: The casing is made from cartridge paper about 3-1/4 in wide and 8 in long, wrapped round some 3/8 dowel and gummed all along. The dowel should be in two pieces with rounded ends connected together with a piece of wire, as sketch.

Before the gum is dry, give a turn of string round the tube about 1/2 in from one end and adjust the dowel so that the join is under the string. Attach one end of the string to something solid and, holding the string taut rotate the tube until it has been pulled down on to the wire. Remove the dowel, leave to dry and cut to length.

The propellant is made by mixing 15 parts saltpetre, 3 parts charcoal and 2 parts sulphur, the quantities being weighed. The charcoal can be made by heating dead willow wood in a tin with a loosely fitting lid in a fire until it stops smoking. Leave it to cool without taking off the lid, then break it up into a fine powder.

Mix the charcoal, sulphur and saltpetre together and mash into a dryish paste with a little water. Put this paste into the casings, lightly press it down, gum a wad of paper on top and leave it to dry out.

Fuses are made by dipping strips of blotting paper about 1-1/2 in wide in saltpetre solution. About a saltspoonful of saltpetre dissolved in a teaspoonful of hot water will be enough for about 6 in of strip. It is then dried and pieces 1/8 in wide cut off and doubled end to end. Fill the outlet hole with damp propellant, put in the ends of the fuse and stick it thoroughly with propellant then leave to dry.

FLYING: Test the model for glide and add sufficient weight to the nose to prevent stalling. Experiment a bit to get the best glide. Any tendency to keep turning in one direction should be cor-rected by twisting the wing. The best way to do this is to pack up the jig strip on your board and re-cover the top surface of the wing. If this is inconvenient, stick a matchstick along the top surface near the wing tip. These trials can be carried out with the model as a towline glider. When the propulsion unit is put in place it should not make any difference to the trim.

The model can be launched as a glider, by catapult or towline igniting the fuse just before release, or by hand, in the following way. Hold the model about level with your head and to one side, as though just launching for a glide. Light the fuse with a match, lighter or cigarette end. Wait until the fuse has burnt along, and as soon as the powder begins to fizz, launch as though gliding.

The prototype has been flown mostly hand launched.

During war time, restrictions prohibit the sale of suitable propulsion units, but when restrictions are removed a well-known firework manu-facturer will look into the possibilities of produc-ing such a unit. Meanwhile small quantities of ingredients are obtainable from chemists.

Here are a few points to note:

For a catapult launch, 11 ft of 1/16 sq rubber with 26 ft of thread stretched about 12 paces has been found to serve.

The force from the propulsion unit depends on the size of the outlet, and how much the in-gredients are mixed, so if at first you do not get enough speed, mix the powder up a bit more. If you get too much looping, open out the jet outlet with 3/32 or 1/8 dowel before putting in the fuse.

If you use balsa substitute, and the model turns out a bit heavy, make the propulsion units on 1/2 in dowel instead of 3/8 in, but keep the length the same.

A permanent flat board with jig strips fixed is very useful for storing the model, and correcting warps. Holes can be made to clear hook and wheels." 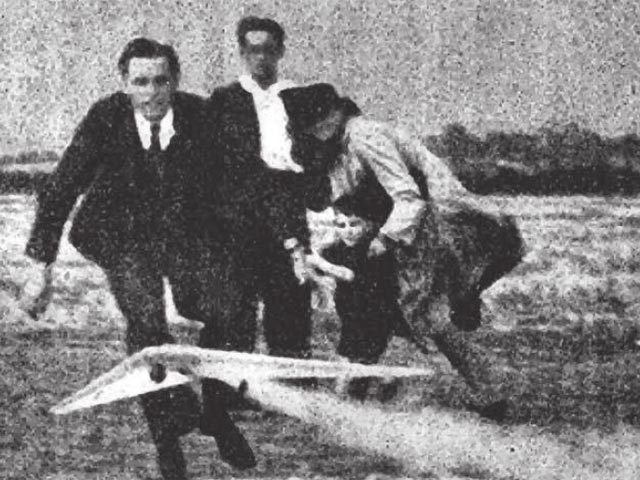