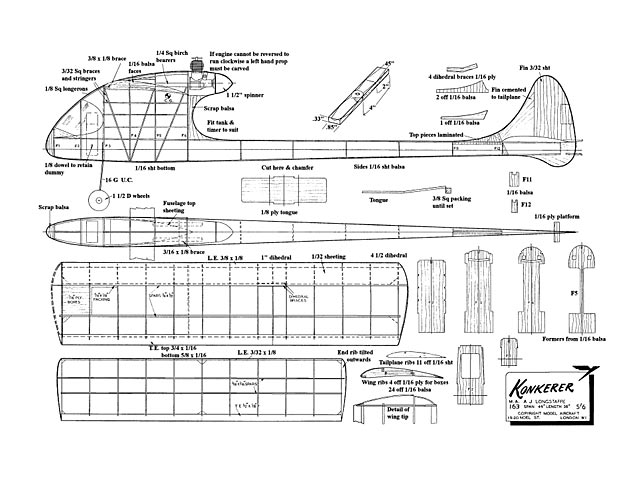 When the PAA Load specification first appeared I began, as many modellers did, by modifying existing models to conform to the rules; odd windows cut into the front and sides of pylons, bubble cockpits, 'greenhouses' - all were tried but with little success. The loading of the model inevitably went up and a complete change in behaviour occurred. If serious competition in the P.A.A. load class is your aim, the only way is to start from scratch with a model designed for the rules.

I had been experimenting for some months with the high thrust line layout and naturally thought of its possibilities with the P.A.A. load model. However, with the engine up near the leading edge the dummy had to be near the CG and under the wing. The further limitation of providing windows to front and sides of the pilot gave rise to a hideous looking fuselage!

Then the present layout occurred to me. The pusher engine still gave a high thrust-line and now enabled the dummy to be placed in a neat cabin up front. CG position comes at about the usual 70 to 80 percent, even with the long tail moment.

The first model on the new layout was built for an Amco 3.5 and weighed 32 oz, that's 3 oz over minimum all-up weight. Performance was satisfactory but the model was very loth to ROG. The half-buried nose-wheel was replaced with a longer undercarriage and the snag remedied.

When the latest class for up to 1-1/2 cc engines with 4 oz 'half-size' dummy was announced, Konkeror was put on the board. Though designed and built round an Elfin 1.49 cc it could, of course, be powered equally well by any of the 1.5 cc units on the market and would not be lacking in power even with an ED Bee..."

Update 08/10/2021: Replaced this plan with a revised version, formers now re-numbered as per John Lockwood's suggestion (see comments), thanks to JanNovick. 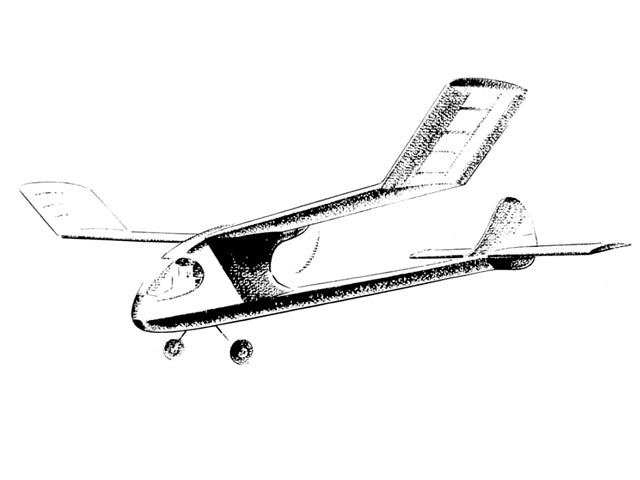 Nice plan, layout like Buzzard Bombshell with pusher prop in place of back stringers. However, I noticed a minor error in the original article that has been carried over to the cleaned-up plan. The F-2 thru F-5 ‘FORMERS FROM 1/16” BALSA’ drawings should be labeled F-3 thru F-6.
John Lockwood - 01/10/2021
Add a comment