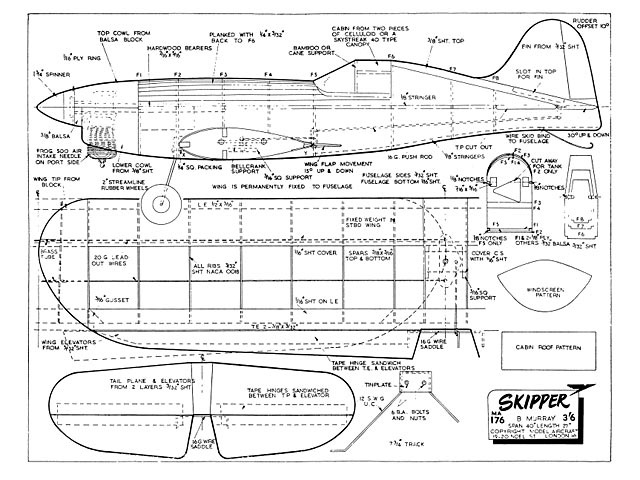 START construction on the fuselage, by cutting out the two basic fuselage sides from 3/32 in medium sheet balsa. Clearly mark the position of the wing, but leave the cutting out of this portion until the wing is completed. Cement 1/8 in sq stringers to inside of fuselage where shown. Cut out all fuselage formers from 3/32 in sheet and cut the bearers to size.

Assemble formers F1,F2, F3 to bearers, noting that the fuel tank passes right through F2. Firmly cement this assembly to fuselage sides, pre-cementing where necessary. When this has set, clip the fuselage sides together at the tail with a clothes peg or rubber band and add the remaining formers and fasten the undercarriage to F2 with tin plate and two 6 BA nuts and bolts. Now leave the fuselage for the present and start on the wing.

Wing. First stage in making the wing is to make the trailing edge from two pieces of 3/32 in x in 35 in, cementing in between them a piece of tape 1 in wide which will be the elevator hinge. Now pin down the lower main spar and the TE, packing to the necessary level in each case. Next add wing ribs, top main spar and leading edge.

Fix the bell crank support (making sure of a strong joint here) and the bell-crank, threading lead-out wires through port wing. Leave the push-rod projecting. Carefully sand LE to shape as this helps to give the reflex to the wing section..."

Update 02/10/2012: replaced this plan with a cleaner version, on plain background. 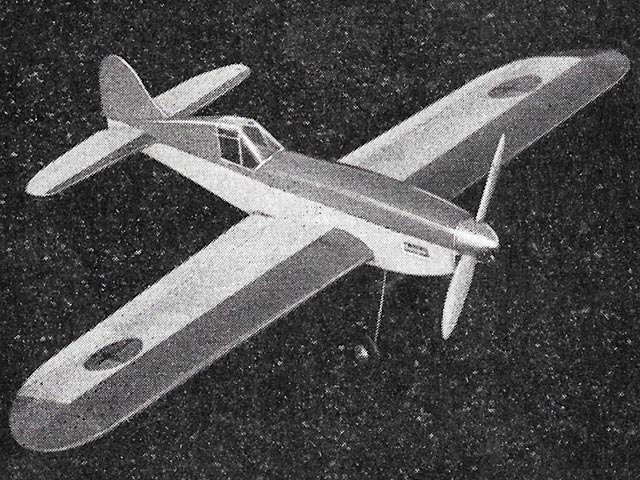