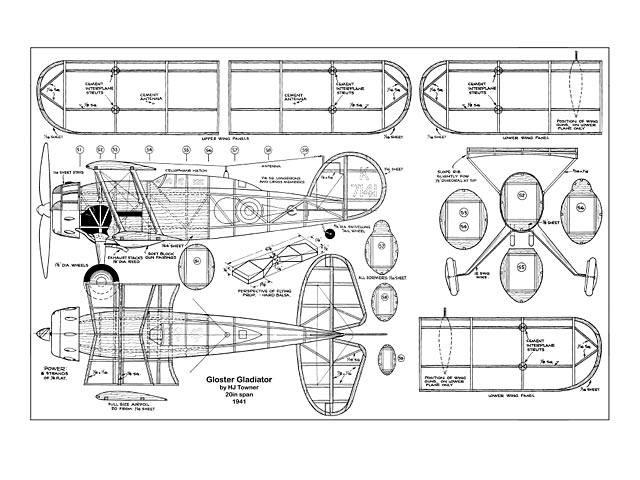 Note this plan was first published in Aeromodeller Nov 1938, drawn by Cy Finegold.

The Gloster Gladiator is a direct descendant of the Gauntlet, which was one of the finest biplanes in the Royal Air Force. The Gladiator has a top speed of 265 miles per hour, cruises at 228 mph at 14,500 feet. The service ceiling of this machine is 35,000 feet and it can ascend to 10,090 feet in 4 minutes with full military load, oxygen tanks, wireless and night flying equipment. The Bristol Mercury engine is used and gives 685 hp. The machine weighs two tons.

It is interesting to note that when the Air Ministry held a competition for day and night fighters, the Gloster Gladiator won its spurs against a large field of machines, and that it employs many innovations never before tried on biplanes. The single bay wings can stand terrific loads in a dive. The naonostrut landing gear makes for a cleaner design, and yet can stand a great deal of abuse. The Air Ministry saw to that. The undercarriage uses Dowty internally sprung wheels. Armament consists of two Vickers machine guns on either side of the fuselage, and Lewis guns on the lower planes. Blisters over the wing guns keep with the streamlining of the Gladiator.

This model is the last word in simplicity, and the construction is straightforward. The drawings and pictures are self-explanatory, so instruction will be kept to a minimum. The cost for materials will be within shouting distance of 1s 6d, and materials can be purchased through your local model supply or mail order house. The only tools needed are a razor blade, pliers and sandpaper.

As a flier the model leaves very little to be desired. Its smooth, easy flight, snappy take-offs, three-point landings, and stable flights, will repay you a hundredfold for every minute spent in its construction. And so to build.

Construction of Fuselage: The fuselage is of conventional construction. Cut the plan out and pin it to a flat board. Place a sheet of wax-paper over it to prevent the parts from sticking to it. The drawings are full size, so the fuselage frame, as with the rest of the model, is built directly over the plan. This assures you of getting a square and accurate frame.

Start by making the fuselage sides over the side view. Lay longerons of 1/16 square medium hard balsa over the positions shown. Cement the vertical and diagonal members in place. Use pins to hold the various parts to their correct place. Build the other side directly over the first side. When they are both complete remove them, cement S-10 together, and glue the cross-braces in.

Trace the formers on to 1/16 sheet balsa. Cut them out and cement at their respective positions. Do not cut any notches in them until you are ready to glue the stringers into place. A typical cross-section is shown on the plan (S-2). Note that in this section Former F-6 is cut from in. sheet. Stringers of 1/16 sq balsa strips are cemented to the formers and run fore and aft..." 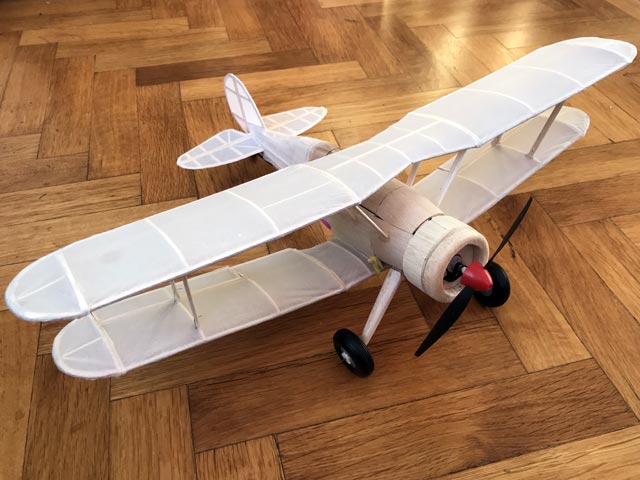 Hello, I have recently done an RC conversion of the Gloster Gladiator [main pic] with the plan from Harold Towner. Feel free to put it on the page if you think it is good enough for it. (It is not perfect as I am only just starting to do such complex models). Thank you,
DownwindChecklist - 12/02/2021
Add a comment