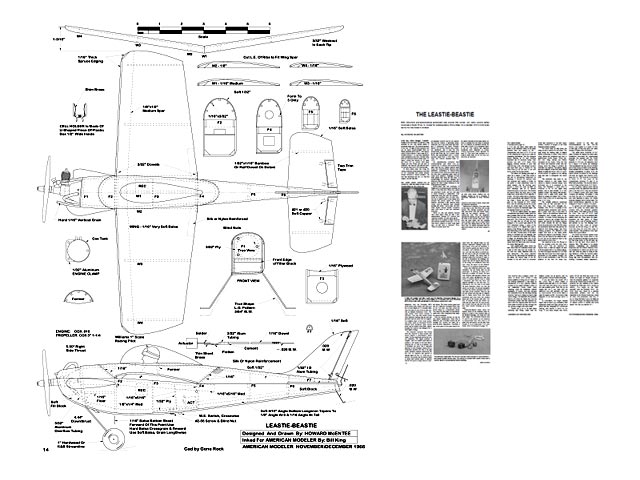 Quote: "With ultra-light sub-subminiature equipment just around the corner, our radio control editor produces a timely 37 sq in buzzer for postage-stamp flying sites. On a derated .010 it might even be fun for the Class III drivers! Leastie-Beastie, by Howard McEntee.

Like any other design, Leastie-Beastie is the end result of a series; it was preceded by two very similar planes of somewhat larger size. The original appeared in the Aug. '58 issue of this magazine and got its name Minnie-Missile from our fellow members of the NJRCC, who simply called it Mac's Minnie (oz1755). It had a span of 24 in, weighed around 11 oz, and was considered quite a sensation at the time. Several years later we produced Minnie-Most (oz7102) in the May '62 issue, which had shrunk to 18 in span and about 6-1/2 oz weight. Both these planes are fine flyers and are still in existence - but both are now shelved since it's lots are more fun to fly this wee one.

All three planes came into being following technical advancements in the field of R/C equipment and model engines. Minnie followed a double advance; Cox had just introduced the tiny .02 Pee-Wee engine. And the very first all-transistor receiver had hit the market; this was the Deltron, a somewhat erratic performer, but it was quite small and light, and it eliminated the heavy filament battery. For its time, Minnie was a pretty hot performer, and it was felt that proportional steering would enable us to do the best flying job. So it proved. Most flying was accomplished with a rudder actuator made from a 5000 ohm Price relay (the Deltron operated from 22- 1/2V).

Our manufacturers continued their miniaturization, and when Cox announced the .01 engine, and at almost the same time the tiny Otarion receiver came along, they triggered frantic drawing board scribbling, culminating in Minnie-Most (we named it thus, since we couldn't see at the time how a practical plane could be made much smaller!). Fuselages of both these planes were fairly fat and deep, to accommodate the receiver, batteries and what-not, with receiver mounted vertically against the front cockpit bulkhead in the most approved manner.

Minnie-Most has had hundreds of flights and is in almost as good condition as when it was first built (these tiny planes are amazingly tough—and are very easy to repair following a catastrophe). Real misgivings were felt over the actuator - which is a modified Gem 100 ohm relay, but due to careful work on the linkage this actuator has proven ample for violent stunting, including a few genuine spins (many tries at spinning have brought success only twice - but at least, the little plane doesn't execute sudden unwanted snap rolls when it gets into awkward attitudes).

While no new and smaller engines have come along, when we saw a subsubminiature German R/C receiver and matching actuator, the urge again struck - there had to be a sequel to Most. Receiver and actuator together weigh only .4 oz, so here was a chance to really chop plane size, yet still have a "practical" flyer. That's in quotes, since like the earlier members of this plane series, we have to consider who the plane is practical for; it is certainly no beginner's project, for while easy to build, it is a screaming bomb in the air. The receiver and matching equipment were described in Radio Control Equipment News, Jan/Feb. '66 page 50. They have been available on a made-to-order basis, but by the time you read this, an importer expects to have them in stock, along with the matching transmitter.

Batteries are a problem, if we don't want to bog down a nice little flyer with excess weight. The German modelers use tiny disc cells which look like button nickelcads, but are actually common 1.5V carbon-zinc cells. They are apparently intended for hearing aid use, but will stand the drain of the receiver quite well. Also, they are quite cheap, and the overseas users normally make ten or a dozen flights on a pair, then discard them for new ones. Sad to say, no exactly equivalent cells are sold in the States, but we have located a usable substitute; they are Eveready #S76 silver-oxide cells, which will also give ten or more flights of 2-3 minutes each, cost 30¢ each in lots of six at such outlets as Newark Electronic Corp., Chicago 60606 (their stock number is 49F398). You can also obtain these cells wherever hearing aids are sold and serviced (but the price will be higher). It's possible some of the tinier nickelcad cells, such as Eveready B100T (which have soldering tabs) would work, but we haven't tried them, mainly because the receiver was designed for a little higher voltage.

The magnetic actuator that comes with the receiver is quite potent, and would handle a considerably larger plane. So this equipment solves the control problems. The engine problem is tougher—and Cox doesn't seem about to market a .005 engine in the near future. Running the .01 rich is no answer, nor is reversing the prop. But a complete solution to this dilemma comes from a Wisconsin modeler who has in the past made variable exhaust restrictors for the Cox .02 engines, and agreed to furnish same for the .01. With the restrictor, the engine can be slowed down to about half normal speed, if desired, which will give a large drop in rpm 16 A little bit smaller and Mac could use his Sterling Command Master for a carrying case. Mac got ten or more flights of 2-3 minutes each from Eveready #S76 silver-oxide cells substituted for the German carbon-zinc cells. and thrust. The lower engine speed and use of a restrictor increases flight time on the Cox tank, and also quiets the engine whine to a considerable extent. You could fly this plane in most schoolyards with a few complaints from sensitive- eared neighbors.

With the prelims covered, we can get into actual construction. Since this is definitely not a building project for the average R/C novice, we won't do a stick-by-stick description. Needless to say, most parts of the plane should be made from the lightest balsa you can acquire, especially fuselage sides, top and bottom, wing and tail surfaces. A little heavier grades are used in a few key spots - per notations on the drawing. And real hard sheet is utilized under the nose to take the inevitable hard bumps in landing. The upper edge of fuselage sides from formers F4 back to the tail is considered the fuselage reference line, and all angles (such as that of the wing) are measured from this line. Ditto the angle of the firewall (former Fl) to produce downthrust.

Down and sidethrust angles may look excessive, but are those used on the prototype. F1 should be hard 3/32 thick ply, or softer 1/8 stock. We have long favored side-mounted engines (we note with some satisfaction that this trend is growing rapidly even in Class 3 stunters!) and find the little Cox engines handiest to run this way. Unfortunately, the Cox tank is not made for such mounting; when you turn the engine on its side, it's almost impossible to reach the engine mounting hole hidden back of the cylinder. Thus we use the one mount hole that can be reached, and a clamp made from thin sheet aluminum and held with two screws takes care of the engine right side. You can, of course, mount the engine upright and the plane will fly just as well, but it won't look as neat and trim with that 'sore thumb' sticking up on the nose!

Triangular-shaped balsa along the bottom edges of the fuselage sides enables us to sand a nice rounded edge on the finished fuselage—for those who like such edges. The turtledeck formers atop F2 and F4 are shown on the drawing in approximate size they need to be when they are angled, per the side view..."

Alternate version of the same plan, a scan of the drawing as printed in AM 1966. Unscaled. Thanks to GeorgeG97322. 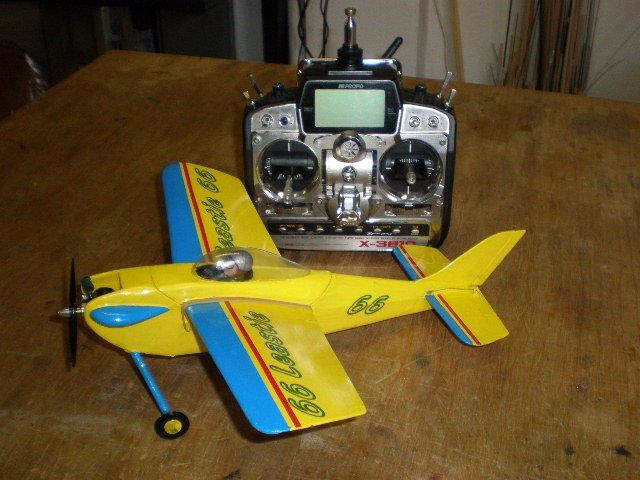