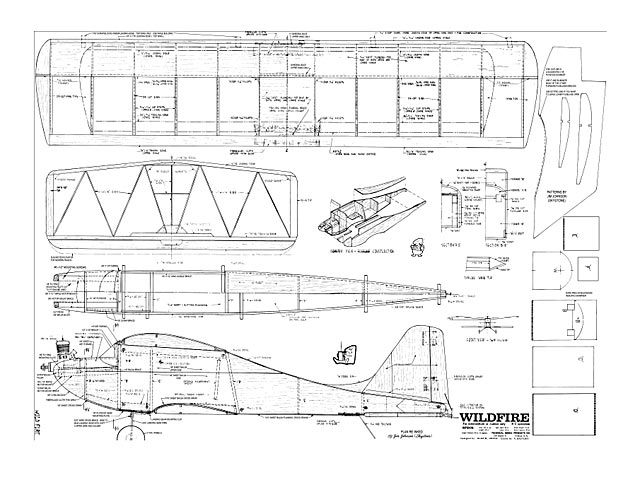 Most of the special virtues of the biplane configuration have been exploited by Technical Model Products Co (Pittsburgh 3, Pa) in their Wildfire R/C plane kit, to produce a fine little flier. It is a compact plane for its wing area of 445 sq in, having only a 36 in span on the top wing. Thus it can take more of a beating than a spread out monoplane of equivalent area. The biplane setup also makes the model almost impossible to stall - a most helpful characteristic for the beginner in R/C!

Construction is surprisingly fast, due to the simple structure of the plane. The fuselage sides are diecut 1/8 balsa, cemented up of three sections apiece. No doublers are used, but the structure around the nose is beefed up by maple motor bearers, a plywood engine mounting plate and various bracing pieces which are glued into the framework; 1/16 sheet covers the top and bottom of the fuselage back of the wings. The landing gear which attaches to a 1/8 ply plate beneath the fuselage is made of two formed pieces of 3/32 music wire, which the builder must bind and solder together. The completed gear is hinged on mounting clips, furnished in the kit. Springing is by means of rubber bands to a dowel running crosswire in the fuselage. 2 wheels are specified. Tailskid is 1/15 wire.

Cabin area is plenty large enough for most any sort of Rudder or Intermediate radio installation, 8 x 4-1/2 x 2-3/4 inside, with one bulkhead placed vertically near the forward end of the area. This bulkhead forms a nest in which the receiver can be bedded down in foam rubber, with the rest of the area open to batteries, servos, escapements.

The designer tells us that the plane is very well suited to Galloping Ghost control, and the plans show the typical narrow GG style of elevator. Dual escapements, up-kick elevator may also be fitted. The plane will carry up to 20 oz. of radio equipment; with the light weight of present day receivers, this gives the builder a big leeway in the kind of controls he can install.

Stabilizer is simple flat construction with diagonal ribs for warp resistance. Rudder and fin are of diecut 1/8 sheet balsa. The stabilizer assembly is held against the lower rear of the fuselage with rubber bands.

Wing construction is similarly simple but rugged. The upper wing, which has a 7-1/2 chord, is built in two parts, then cemented together to achieve the .desired dihedral. The lower wing (29-1/2 x 6) may be built flat on the plane in one piece, as it has no dihedral. Both wings use a double spar at the point of greatest depth, are sheeted on the upper leading edges, and are cap-stripped. Tapered TE stock is furnished for top and bottom wings. All three diecut sheets of ribs in our kit were of a light but stiff cut of balsa especially suited to this use (known as quarter-grain).

The manufacturer recommends light silk for covering; paper is not tough enough, nylon is too heavy. No covering material is furnished.

Large plan sheet includes full size layout of both wings, the entire stab, top and side views of the fuselage, various cross section and perspective views of assembly. Plans are simple and uncluttered, because all building notes and instructions are on a separate sheet of paper. We are advised that the plane weighs around 20 to 25 oz finished, and 32 to 42 oz loaded with radio equipment. Though not recommended, some Wildfire copies have been flown successfully at as high as 54 oz! Best engine for average flying is a hot .09 (OS Max, K&B, a diesel, etc). The plans show a Fox Rocket .09, which is quite suitable for the beginner, with a light rudder installation. Hotshots can get fine results with .15 engines on pulse.

Interesting inclusion in the kit is a piece of special lightweight fiberglass cloth (TMP markets several grades of cloth, also fiber glass resin) to be used as reinforcement, tail surface hinging. It may be attached to the model with cement or resin.

It is said to be possible to build a Wildfire in 3 or 4 evenings of work, which sounds possible due to the pre-fab, simple design. Required to complete the plane are engine, tank, prop, cement, dope, covering material rubber bands, pair 2 wheels, engine mounting screws, complete radio installation." 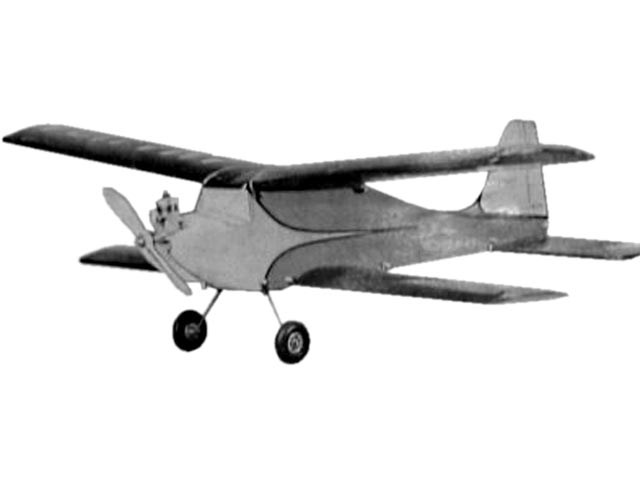