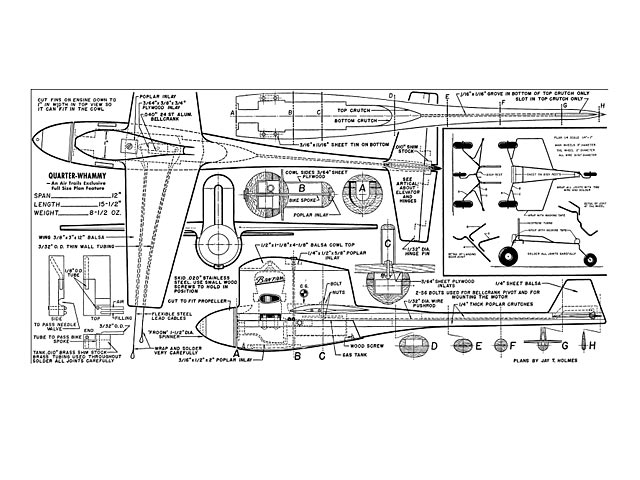 Quote: "BACK in the spring of 1943, when most airplane modelers were getting out the old Fireballs, dusting them off, and taking inventory of the missing parts, in preparation for the contests to come, Jim Clem a student at Southern Methodist University; and Maurice Stanglin of junior high-school age, both happened to drop into their favorite model shop at the same time on their way from school.

A short conversation convinced each of them that they had ideas in common and the days that followed found them spending many hours together, hanging around the same model shop, flying at the same field, and visiting each other's workshop. There soon developed a close friendship, with the boys exchanging ideas on original model designs, building their models together, and during the summer months traveling to almost as many contests throughout the Southwest as there were Sundays, rainy or sunny.

At a contest in 1947, Stanglin won. a Bantam as a prize and Clem traded for another, so they designed models to be powered with them and entered them in a contest. But with the type of ignition and fuel they were using they had no success and discarded them for a while. Then, when the glow plugs were put on the market and the boys wanted to experiment with them, they tried them on the Bantam ships. Another club member, Bill Mickle, who also had a Class II ship, challenged the boys to a race and to their amazement his model had a higher time!

The boys did not take defeat cheerfully and decided to go to work in earnest on this class of speed model. Propellers were experimented with and the speed improved to 98 miles per hour, which at that time exceeded, unofficially, the AMA record. With this encouraging result, a new ship was designed and, at the local AMA-sanctioned record trials, an official time of 107.48 was clocked by Stanglin in February 1948, in the Senior class. At the next. speed trials, Clem established a record in the Open class of 106.21 mph.

Since the design had proven satisfactory on the .19 ship, they decided to use the same type for .29's and .49's. With models of this type, many awards were won by both boys at local and South-western contests and the climax came at the 1948 Nationals, when Stanglin won two firsts and both took seven awards. An invitation to the Plymouth Internationals followed, at which Stanglin won two more firsts and the two accumulated, in addition, a fourth, a fifth, and a ninth, in three classes of motors.

Most every modeler will be interested in taking a look at the plans of models that can stack up such a collection of trophies, and also in the instructions for building them. This is the way they did it.

Quarter-Whammy (.199): First trace the top and bottom crutch pattern on a piece of 1/4 in poplar and saw out the crutches. Then fit the Bantam motor to the inside of the bottom crutch and drill the motor mount holes for 2/56 bolts. Drill two holes, spaced the same as the holes in the motor lugs, through two pieces of 3/16 x 5/8 sheet tin and place this tin on the bottom of the motor mount; then push the bolts through the motor mount and solder the(:bolt heads to the tin.

Take two blocks of balsa, 1 x 1-3/4 x 8 inches and cut out top view of pod. Take bottom block and gouge out for bolt heads, engine case, and gas tank, being careful, to get gas tank hole no larger than required. Then gouge groove in top crutch, full length of boom, so that 1/16 wire will fit in it. Glue crutches together, except where bottom of pod comes off, where it should be only spot-glued. Glue bottom and. top blocks in place and wrap entire fuselage tightly with strand rubber and let glue dry..." 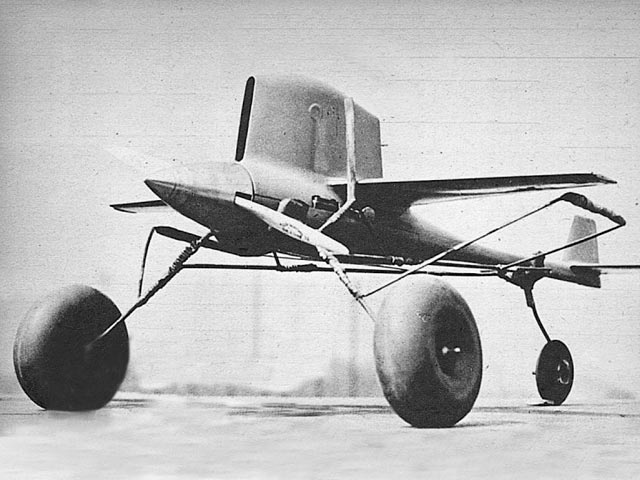