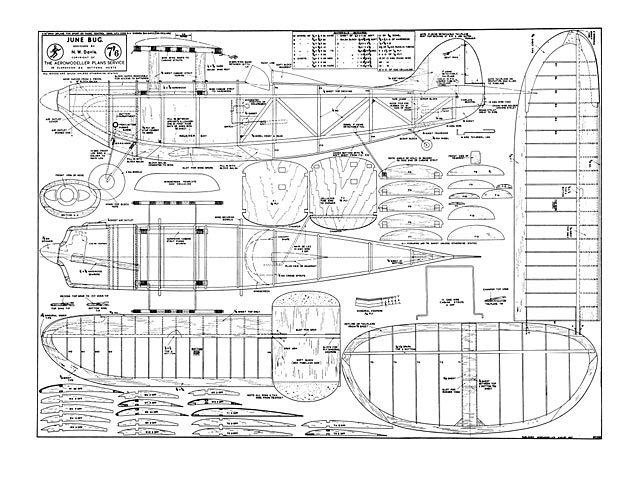 June Bug was designed as a result of a dispute with a fellow modeller over the possibilities of powered biplanes. It was powered by an original Garami Atom (1.6 cc) and had 32 in span giving 235 sq in wing area. Certainly it flew, but was rather difficult to handle - too much fin area and not enough dihedral. June Bug II corrected this error and was entirely satisfactory. Powered by a Super Atom, mounted inverted, it could be adjusted to do very nice loops by loosening the screw on the spark advance slightly.

It would climb to about 40 ft and as power increased, due to automatically advancing timing, it would start looping and continue until the engine timer shut off.

June Bug III was very similar to JB II, with same span and area, Super Atom powered, but featured a float gauge in the fuel tank, shorter landing gear, and the present system of mounting the lower wing. Mark IV was the first diesel powered 'Bug', and this was a delightful free flight model. Powered by a converted Arden, then an Amco .87 cc, then a Mills .75 cc, it was a favourite until summer of 1956, when it flew away. It was returned this spring, but there was little left of it except the Mills .75, which started with a few flips and ran as well as ever!

June Bug V was the first 4 ft span model for an Elfin diesel. Mark VI, the latest model, has a David Anderson Viking 2.5 cc (minimum recommended capacity) and is a veteran flier. It needs 8 degrees right thrust with a 10 x 4 prop for straight flight, to counteract the usual biplane torque effect, and will fly as though on rails.

The fixed tail is a personal preference: being rigid and extending out behind the fuselage, it offers a good deal of protection to the rudder mechanism when the model is being carried or flown. Details are given for alternative detachment. The fixed tail also lends itself to elevator installation, although the 'Bug' is primarily for the rudder-only fans. Being rugged in the extreme, simple to make and pleasing to look at both on the ground and in the air, June Bug is a Biplane with personality and one which many modellers will enjoy for simple sport flying or R/C contest work.

It is not intended for the beginner, but any builder with experience of a power model will find all the necessary building detail on the full size APS drawing." 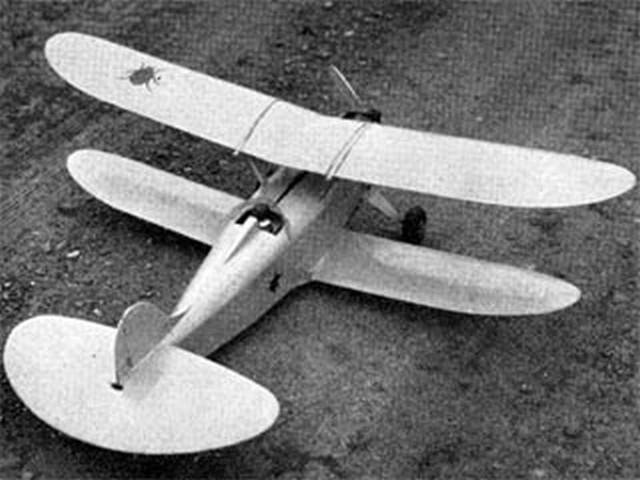