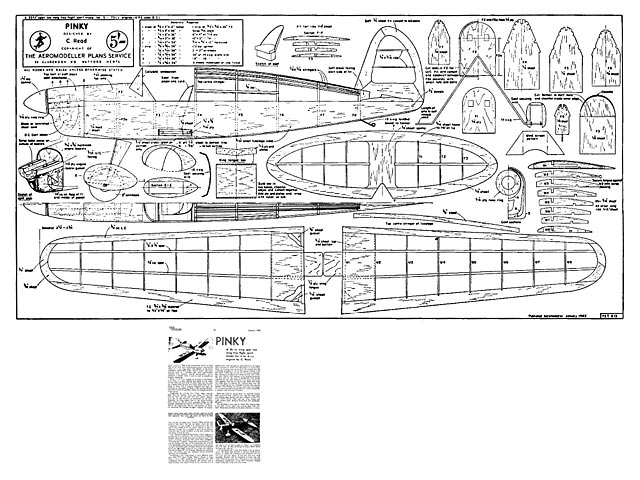 Quote: "Low wing?! That is the exclamation which so often fills the air after some enterprising aspirant outlines his ideas for a low wing sport free fighter to his fellow modellers. Admittedly these 'down under' sportsters can be more of a handful than their conventional brothers, but correctly applied aerodynamic layout produces a model which is just as easy to handle on Sunday afternoons.

With a .5 to .8 cc engine up in front, Colin Read’s little Pinky is a clean playing sportsman as one meets on any field and just look at those lines, did you ever see a model look the part of a racey single place monoplane as does Pinky? Liberal dihedral and high set tailplane are the secrets of Pinky’s well behaved disposition and no-one can grumble about the straight forward construction.

Commence by cutting the 3/32 sheet fuselage sides and the formers, from 1/8 balsa, F2 and two F2a cut from 1/8 ply and bolt and cement together with the u/c legs between as instructed on the plan. Assemble the wing tongue box in two halves binding with thread or silk for extra strength. Make up the fuselage, cementing the sides to F2 and F2a, F3 and F4. Add in the tongue box, and the rear formers, to which are cemented the fuselage stringers. Impose the engine bearers and 1/16 ply gussets, drill the bearer for engine bolts oversize to allow for adjustment to thrust line.

Sheet the fuselage top, forward of the cockpit and the underside (crossgrain). Carve the engine cowling from soft block, hollowing out and well fuel proof internally. Bolt the engine in place and impose the cowl and 1/16 ply nose ring for final shaping to the fuselage contours. The top half of the cowl is detachable and should therefore be only spot cemented to be easily removable after shaping.

Add the u/c leg fairing. Make and shape the wheel spats by placing the inboard sides over the axles and adding the 2 in airwheels between their spacing washers. Then impose the centres, outer sides and shape. The airwheels are used to keep the CG as low as possible, a necessity with this type of model.

Build the wing by laying down the notched trailing edge and lower spar. Add the ribs, then the upper spar and leading edge, gussets and tips. Cement in place the lower centre section sheet, 1/8 ply wing tongue and upper surface sheet. Remove from plan and sandpaper all parts.

The tailplane is very easy to build. The leading edge is cut from 3/16 sheet and trailing edge from 1/8 sheet. Shape and position on the plan. Add 1/4 x 1/16 ribs and 1/8 sq upper spar. Sand to lifting section and remove from plan. Do not use heavy wood for this component, as extra weight is as unwelcome at the rear end of this model as at any other. The fin is built, in identical manner, but is sanded to symmetrical section. Assemble the fin and tailplane as one unit, adding the soft block fairing between.

Colin Read’s method of finishing will be of interest to readers, for he is well known for the Concours d’Elegance finishes. Sand the whole structure and dope several times before covering, finishing with extra fine sandpaper. This gives that 'smooth' wood effect around the outlines and on sheeted area. One of the prototypes was covered with lightweight nylon from an ex-government parachute and gave the model great strength. However for a normal finish use lightweight tissue for the wings and tailplane and heavyweight for the fuselage. Decorate to personal taste, add cockpit and any incidental details preferred and then the windshield.

Trimming a low wing design is little different from any other F/F sport model. Heavy wheels, a large (8-1/2 x 5 in) nylon propeller and generous side area compensate for the wing position and correct trim is soon realised. The model should on no account turn to the right as it will tend to spin in. Adjust the thrustline for a left turn, to take advantage of torque effect which will keep the nose up.

The prototype had 2° left thrust, with no downthrust. Mr Read adds that this is the first model he has known to require left sidethrust and attributes this to a low CG position, plenty of side area and extra large propeller. Readers will be interested to know that one of the Pinky prototypes won a first place in the Concours d’Elegance competition at the 1961 Northern Heights Gala, flying well in the rain afterwards." 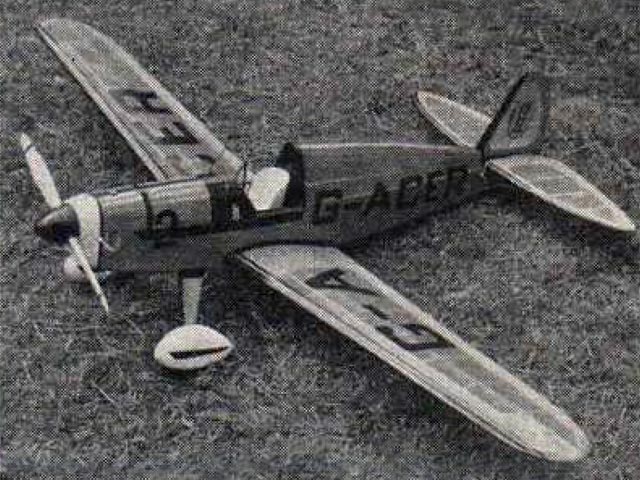 Here's a couple of pictures of my 'Pinky', built during the 2020 lockdown [pics 004,005]. I haven't been able to bring myself to cover the airframe yet as it looks so pretty in its naked state! It will ultimately be covered in lightweight pink silk. An early Allbon Greenhead 'Dart' is in the nose and I am hoping that it will prove rather more successful than my first attempt at this model more than fifty years ago (the wings fell off and it crashed to the ground!).
Richard Scott - 19/05/2020
Be careful that you have the correct dihedral (tapered wings can deceive the eyes). Knock off wings are great, even for rc versions, if they get loose it's easy to firm up again by adding tissue (whatever) to the tongues; which don't want to get oily from the engine exhaust (!). Imho, the wings should not budge when the plane is held sideways and shaken gently as it can in flight. For rc conversion, shake more vigorously (!!) (or convert to conventional banded on one piece wing of course, and rename "Chicken")
Jim - 02/02/2021
Add a comment