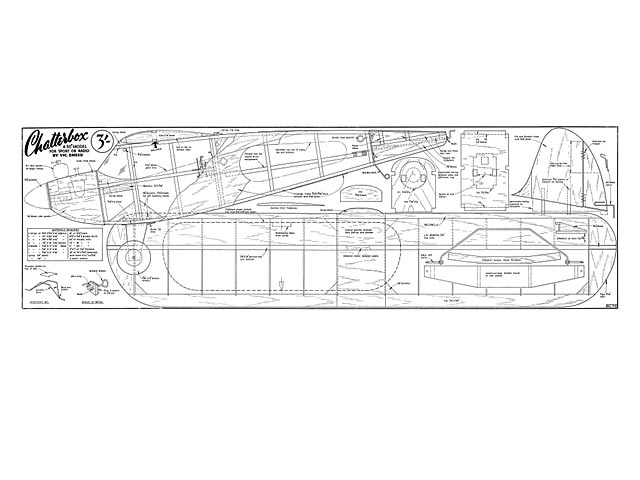 Quote: "If you've ever heard a Galloping Ghost system working without the motor running, you'll know why 'Chatterbox' was picked for a name! With Ghost system and any small transistor receiver, the total radio weight including Mighty Midget and all batteries, comes out at just about 7-1/2 oz, which is the safe maximum for this little design. A similar weight is attainable with rudder only operation using a Rising clockwork actuator, or with a rubber escapement ; since this last is perhaps the most awkward device to install, we have drawn a Conquest actuator on the full-size plan.

Of course, if you're looking for an immensely rugged small sport model, Chatterbox without radio should fill the bill admirably, and with that fairly bulky fuselage, you can experiment with parachute dropping and so on. There will be hundreds of Chatterboxes flying soon, and we're sure that it will be only a matter of time before we see the first biplane payload version!

Any motor of from .5 to .8 cc can be used for free flight, but a .75 or .8 cc is recommended for radio. The empty weight of the prototype in flying trim is just under 12 oz, which makes it the heaviest model of this size we've ever built; however, the uncovered weight is 9-1/2 oz, of which nearly two is accounted for by the undercarriage, so if you're wanting it for sport flying only, it should be possible to come out at 10 oz total.

Constructionally, the fuselage is a simple slab-sider built in the usual way, then covered with hard 1/32 sheet and light nylon. In early tests, with 8 oz of ballast moved up and down to alter the vertical CG, the model several times came straight in on its nose with no damage at all. For F/F, tissue over the basic frame would be adequate.

The wing is different in that the upper and lower spars are glued to the dihedral brace and left to dry first. After checking dihedral - it must not be less than shown - the wing halves are built one at a time, blocking the up-ended half. Tissue covering has stood up well on the original. The tail surfaces are cut from the softest 3/16 in sheet you can find and sanded well before tissue covering. Cut 3/8 in full-span split elevators if you propose to use Ghost R/C..."

Update 24/01/2013: now fixed the scaling of this plan to correct full-size at 30in wingspan, thanks to Balsabird for pointing this one out.

Update 22/11/2014: Added supplement version of this plan in PDFvector format, thanks to hogal.

Update 23/11/2014: Replaced this plan with a second scanned version, thanks to hogal. 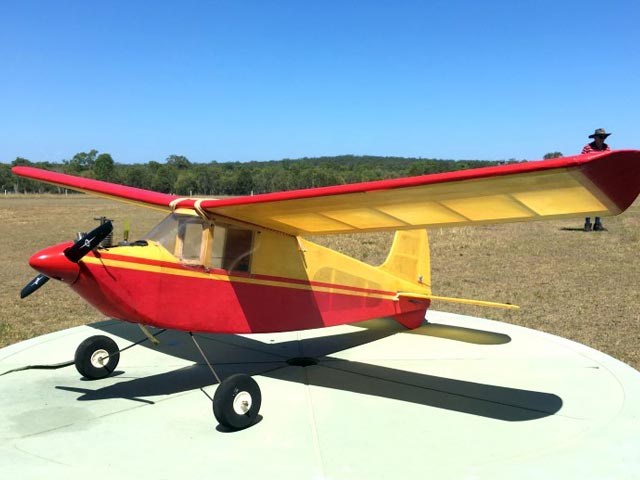 G'day Steve ...Have built a C'box from modified plan and it has flown with a Mills .75. When it comes to flying it certainly isn't a Tomboy. The modified plan was OK although I think there was still a little longitudinal distortion, not much, say 3 or 4 mm over 30inches (hows that for mixing Imp and metric). Wasn't enough to worry about, I just adjusted the spans of wing and stab a bit and left everything else as per plan.
JimRae - 02/04/2014
Hi Steve, with reference to the scaling of the Chatterbox span, I have an original Aeromodeller plan. The span actually measures 29.75". I don't know how stable the plan paper is over time, but that is the span on the plan without any dihedral dimension loss.
AlanD - 26/04/2017
Steve, I've just finished another from Outerzone plans so thought I'd send you some pics if you want them [more pics 004, 005]. The latest is a Vic Smeed Chatterbox, built to the plans only 120% scale.
Al - 28/04/2017
Hi - I came across your page with the plans from the Aeromodeller. I made this as my first flying model in the late 1950s when at Boarding school at Bembridge on the Isle of Wight [more pics 006]. The engine was a Mills .75. Didn't have RC in those days and we chased it on bikes across the country. It was last seen heading out to sea so my next model was a float plane.
AndrewB - 23/10/2017
Recently built a Chatterbox with electric power and 3 Ch radio [more pics 007]. Flies quite well as long as you treat it like a 1950s free flighter! Resists any aerobatics. Would suggest adding an extra wing rib bay each side for a bit more lift and stability and reduce dihedral a bit if you are going RC. I also sheeted the LE top and bottom back to the spar. Suggest a 50 or 60w motor is adequate on a 7x4 prop.
Tony - 17/04/2018
Hi Guys, here's a pic of my Chatterbox, covered in lavender colored silk, with a redfin .030 for power [more pics 008].
PaulM - 11/06/2019
Add a comment