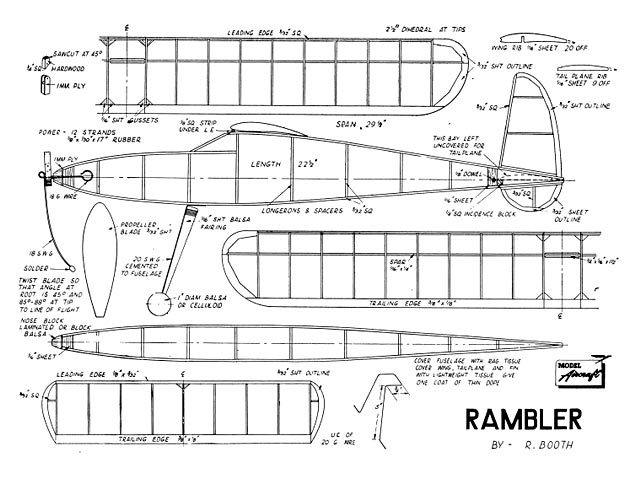 THE prototype 'Rambler' started its life in February 1945, at Rome, during the latter part of the designer's overseas service in the Army. Test flights were carried out at 5.30am in brilliant sunshine! The first machine disappeared a week after its completion and on this particular flight it was timed for eleven minutes odd before passing out of sight into a cloudless blue sky at seven in the evening.

A second model was constructed two weeks later, but this was also lost during trimming tests in preparation for an Italian contest which was clue to take place a week later. The best flight of the second machine was 7 min 15 sec OOS.

The writer constructed a third version in March 1946, a month after demobilisation. This latter machine survived until June 1946 when, after repeated attempts to 'get away,' finally succeeded by disappearing OOS. after 18 min 45 sec.

Fuselage. This is constructed in the usual slab-sider way, two sides are built up direct on the plan and when dry are joined together by spacers top and bottom. Longerons are 3/32 in sq hard balsa. All the spacers (with the exception of those at the nose and tail are also 3/32 in sq. The vertical spacers at the nose and tail are cut from hard in. sheet balsa. A piece of 1/8 in dowel ,secures the rubber motor at the tail.

Wing. To ensure accuracy the writer recommends that a metal template be made for the wing ribs. By tracing the rib shape from the plan and cementing the tracing on to a piece of thin tin, a really accurate template can be made in less than 10 mins. The wing is of normal construction and should present no difficulties. When 'boxing' the two halves together, the tips should he supported to give 24 in. dihedral either side..." 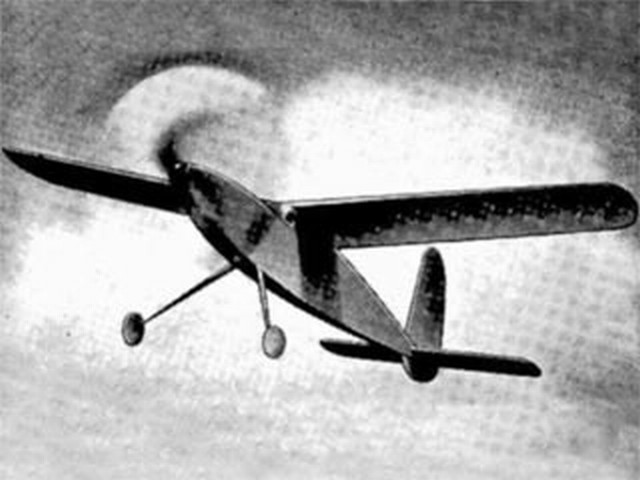