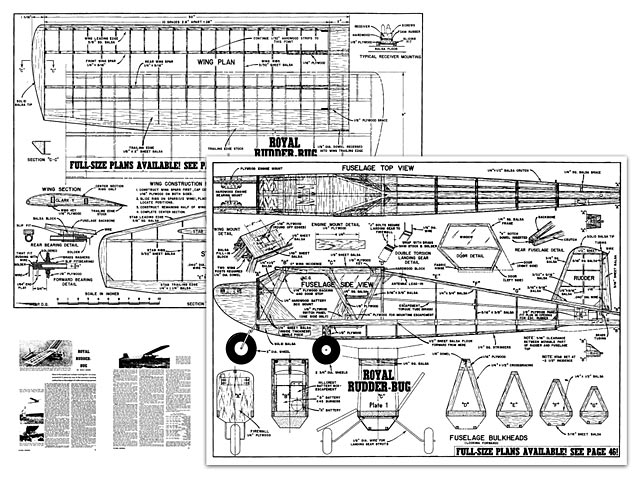 Royal Rudder Bug. Classic design for single channel radio control, with 62in span. This is a copy of the 1954 article pages as printed, together with 2 page plan enlarged up to fullsize. The airfoil shown is flat-bottomed and labelled Clark Y.

Quote: "The Royal Rudder-Bug, the latest R/C model design by Walt Good, which incorporates many up-to-date features to meet all current requirements for flights with engines in the .14 to .19 cubic inch class. Your favorite radio equipment can be installed with ease in the spacious cabin.

The Royal Rudder-Bug fills the need for a good, reliable, medium-size RC ship. It retains the good looks of its six-foot, six-year-old prototype - the Rudder Bug (oz7009) - with many modern features crammed into its five-foot span. The Royal is rugged - you won't have to leave the field early because of a hard landing. It's easy to build. The construction is geared to the newcomer and the expert with limited spare time. No stability is sacrificed, even though the speed is increased slightly by a flat-bottomed wing section. The five-foot span was chosen to provide ample carrying capacity for reliable radio gear and to fit engines in the .14 to .19 cubic inch classes.

Let's get more specific about some of the Royal's features. The 1/2in thick balsa cabin floor is tied to a solid balsa chin-block and to heavy-duty doublers to give a really rugged nose. A lengthened nose and forward escapement help avoid that tail-heavy condition which occurs so often. The cabin joints are gusseted and the wing fasteners allow easy wing pop-off. Even though the Royal is intended primarily for rudder-control only, the wing spars are beefed with hardwood caps to handle violent maneuvers.

Generous dihedral and a small fin as-sure excellent spiral stability, which makes for safe flying and longer life. The latest double-torsion nose gear solves the bend-the-gear-back-after-every-land-ing problem. The trike gear is capable of consistently good take-offs and straight landings. Much thought went into simplifying the construction. The flat-topped cabin and the flat-bottomed wing were both adopted for their simplicity. With 18 ounces of radio gear and a K&B .19, the original Royal weighs 4 pounds 4 ounces, which is almost 18 ounces per square foot. This is considered an optimum loading under present-day standards. Large doors on both sides allow easy access to the roomy cabin which can accommodate almost any of the many available radio units. The radio receiver shown is an experimental three-tube tone job for single-channel control.

Construction: The life span of a radio ship depends on its strength to a considerable extent and this in turn may vary by a large factor with the grade of wood and the technique of construction. Careful selection of the wood, according to the Bill of Materials, is recommended highly. Also the practice of 'double-cementing' really pays off, even though it takes longer. This means placing a thin coat on the joint, before joining, and allowing to dry. Then cement and join in the usual way. The following instructions cover the most important construction items. Remember this is not the only way to do it - go ahead and deviate if you like.

Fuselage. There are several sub-assemblies which may be built first and then brought together for an accurate, true body. The plywood firewall and the plywood engine mounts are screwed and cemented together in the locking manner shown in the drawings. Note that these are not really the engine bearers but are the base to which the replaceable bearers are later attached. The crutch is assembled around the 1/2in balsa floor which extends to the rear of the work bench so the lower end of the firewall can hang down.

The cabin will go quickly and accurately if the two side-door frames (not the doors) are built flat on the bench with their gussets. After they are dry, assemble them to the crutch. Also do the same with the station 'D' triangle. With the nose-firewall, the two door frames and the 'D' triangle in place, the key alignment points have been established..." 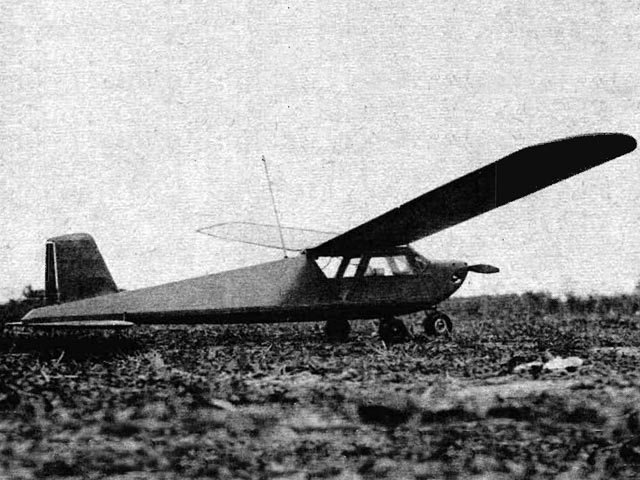