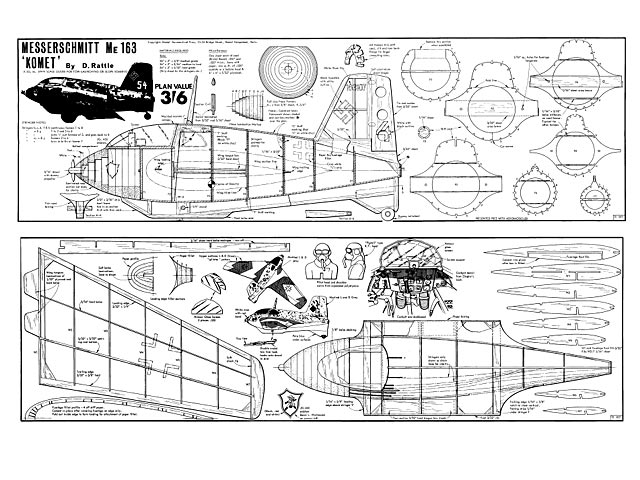 Me 163 Komet. Scale glider version of the rocket powered fighter, for bungee launch or PSS.

ONE of the most interesting aircraft to appear in the last war was the Messerschmitt Me.163 Komet. The story of the development of this machine is told in the book 'Rocket Fighter' which contains, in addition, a wealth of photographs. Some four examples are in this country, Science Museum - South Kensington, Imperial War Museum, College of Aeronautics (Cranfield) and RAF Colerne.

From the modelling aspect, the Komet offers something different, especially as a glider and it is interesting to note that a glider version was actually built by the Japanese, for training purposes. It was of wooden construction and some fifty were built, with the designation MXY7, Akigusa (Autumn Grass).

Construction has been simplified by the use of thin card for farmers, note the turned flanges for stringer fixing. The more ambitious modeller might try to bury a Cox .010 in the nose or modify the tail end for Jetex, but it is with the glider version we are concerned here.

Start the fuselage with the nose cone, fabricated from a series of rings A to E, and built-up segments F to K, which, after cementing and dry are roughly shaped. Next, build a basic frame, shown shaded, this includes members marked with an asterisk. To this frame, formers 1 to 8 are added, these being reinforced as on the drawing. Ensure squareness in assembling these.

Continue with stringering, starting with 'f', these pass thro' formers 2-5 and stabilise the structure. Spar on formers 2 can now be located and cemented, followed by all other stringers and centre section structure. The balsa nose cone and decking complete this part which can now be sanded, covered and doped.

Fin and rudder are built over the plan, and covered and doped before cementing to fuselage, with stiff paper fairings added at the root. Wing-root fillets are built up in a similar way by first locating fillet profile strips and leading edge segment. This is probably the most difficult part, obtaining a good faired line. The fillet is completed by using two or three sections of stiff paper, upper and lower. This is best accomplished by trial and error method..." 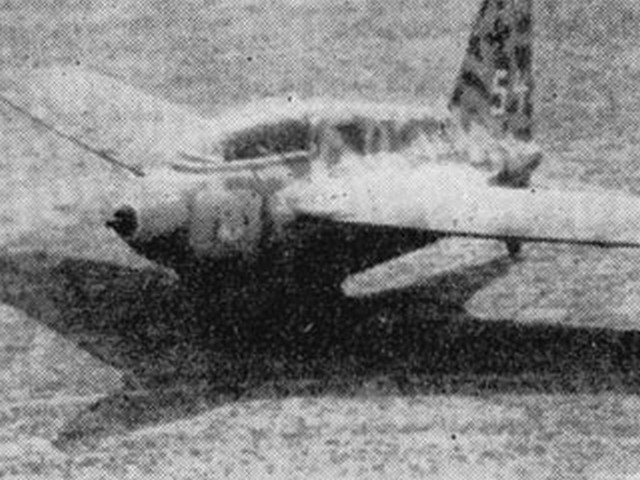