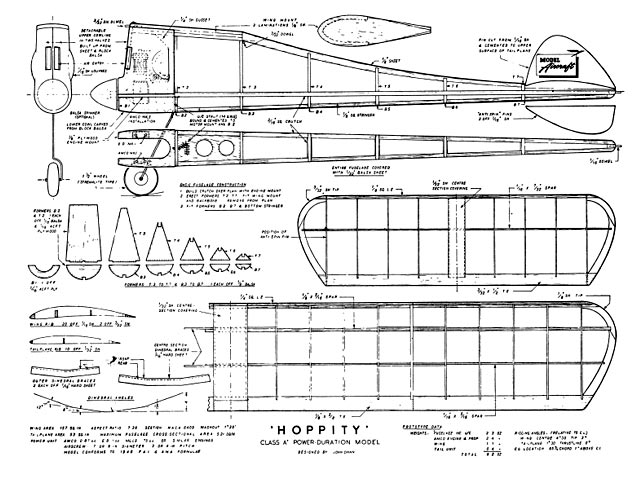 Quote: "DESIGNED around the popular Amco Mk I .87 cc diesel, Hoppity is exceptionally agile under power and demonstrates a glide not often found in small models. The prototype was flown all last season, often under quite windy con-ditions. As is often the case with smaller power models, it proved well able to stand up to comparatively rough treatment, and has now become a worthy successor, for general purpose flying, to 'Austerity' (October, 1948 Model Aircraft) which was lost on its last flight and not recovered.

The Amco engine is an ideal power unit for this model, but almost any other engine of between 0.5 and 1 cc may be installed without extensive modifications to the fuselage. The 1 cc ED Mk I will fit the existing engine mounting, and the Mills .75 cc motor should also be a suitable installation.

Construction. Fuselage. This is built on the now popular 'crutch' system, the crutch consisting of two 3/16 in sq balsa longitudinals with 3/16 in square cross-members. The engine mount, cut from 1/8 in plywood, forms the front of the crutch and should be strongly cemented to the side members. While the crutch is still pinned down, the upper formers, T.2 to T.7 may be fitted and the wing mount, shaped from three laminations of 1/8 in sheet balsa, and the 1/16 in sheet backbone added. Note that T.2 and B.2 consist of in. plywood backed with 1/16 in sheet balsa, while all other formers are of 1/8 in sheet balsa.

The assembly may now be removed from the plan and the bottom formers and in. square stringer fitted. The undercarriage leg should be shaped from 14 swg steel wire and securely bound and cemented to the engine mounting and to former B.2. Former T.2 is temporarily removed to facilitate this operation. A single leg undercarriage is fitted to cut down drag and has proved quite serviceable on the original model.

Assuming that the engine to be used has been positioned on the engine mount and bolt holes drilled, 8 BA nuts should be soldered to small brass plates, one to each lug, and these, in turn, cemented to the underside of the engine bearers... " 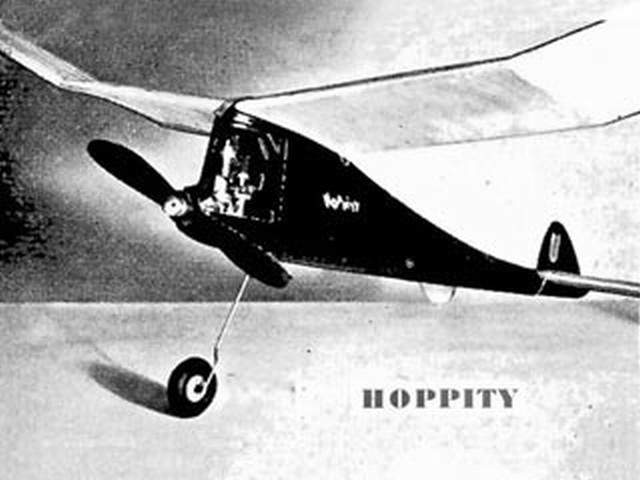