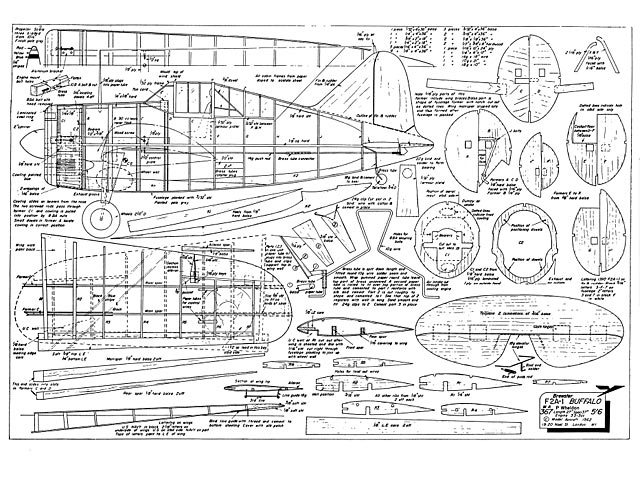 THE Brewster F2A-1 Buffalo had the distinction of being the first monoplane shipboard single-seat fighter to enter service with the US Navy. Flying for the first time in January 1938, it was not a had aeroplane but, due to the accelerated design development that was taking place at this period, it proved no match for the Japanese fighters it was eventually to meet in combat in the Pacific.

The Buffalo entered service in 1939 and was allocated to VF.3 based on the USS Saratoga (replacing the Grumman F3F-1s) and was painted in accordance with orders then prevailing. These colours are indicated on the plan and, for the builder who desires an out-of-the-rut scale model, with a splash of colour, this is it.

The model, although not suitable for the novice, is fairly easy to build, but requires patience and quite a hit of accurate work with the cowling, wheel wells, and undercarriage. The original is also fitted with motor control, operated by a third line, controlling an exhaust restrictor on the Veco 19.

Since the Buffalo is a very tubby design with rather a short nose, it is important to carefully select the wood used in the construction. Failure to do this will certainly result in the model requiring a large amount of ballast in the nose. All wood should, therefore, except where otherwise specified, be of a firm but light grade and particular care should be taken to save weight aft of the wing trailing edge.

The construction of the model falls logically into four stages: (1) the fuselage and tail assembly; (2) the wings; (3) the engine cowling and landing gear, and (4) the final finishing.

Fuselage Commence construction by cutting out the parts for the laminated formers A, C and D. Note that the wing spars are not cut at this time and that when formers C and D are assembled, a slot is left in which the spar ends can be fitted later. Carefully cement the former parts together, using PVA adhesive and clamp while drying.

Cut former B from 1/4 in ply, bend the 10 swg landing gear and fasten in place using five 'J' bolts. Cut the keel parts and cement them together over the plan, then cut out the remaining formers E to K.

Commence assembly of the fuselage by cementing formers C and D in position on the bearers. Bind the centre of the fuel tank with silk..." 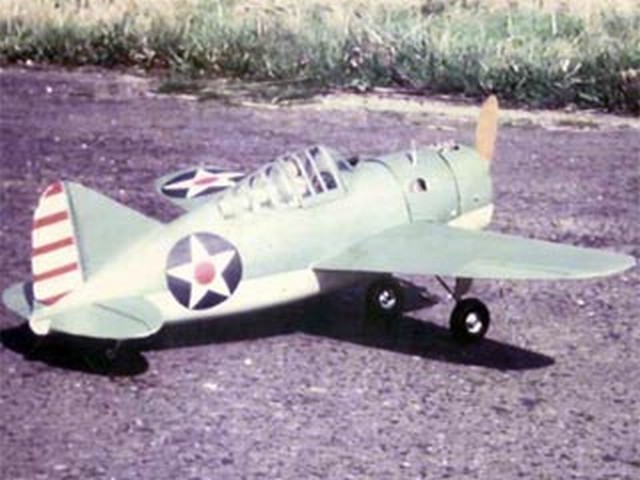 Hi, Steve, Fantastic Site you have here - keeps me occupied for too many hours..!! Well done. Here is a scanned photo (pdf) for your records/site. It's from Plan ID 1707, I recognised the plan straight away..!! I built it (intended) as a "Carrier" model in ~1971, with a 3-line contol, throttle and carrier hook (but perhaps I hadn't fitted the carrier hook - can't see it in the photo) It had an "up-right" OS 35 R/C engine, and a thin aluminium cowl "that I happened to have", and another bent thin aluminium plate over the fuel tank. I can't remember flying it - but the photo is at our "Croydon Airport" flying site, which was "The Three Kings Aeromodeller's, Mitcham, Surrey" site. The club was mainly Control-Line. Probably time of "First Flight". I think I must have made it too heavy (inexperience, first scale model, "heavy" scale parts), and with the combination of the small area wings - made the Low Speed flight section of the Carrier Model contest impossible.... So I "gave-up" on it being a Competition Carrier Model. I already had a non-scale carrier model - light-weight, "profile", big wings, like a "stunter", (plan from Aeromodeller Annual), and could fly between about 30mph to 80mph with the same OS 35 engine, which was quite respectable..!! Best wishes,
VinceDay_Singapore - 09/04/2014
Add a comment