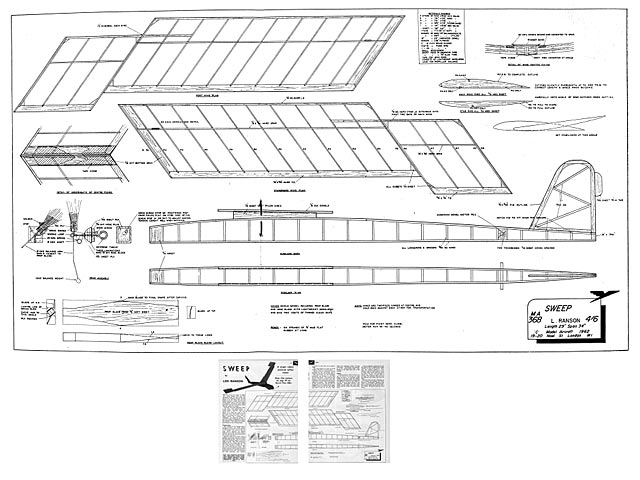 THIS is one in a series of tailless rubber designs which has been developed mainly for sport flying, but also for the occasional contest. In this design, as in the others, the aim has been to produce a model that is struc-turally simple, easy to trim and handy to transport; all features more usually associated with the conventional, rather than the unorthodox, design.

Obviously the swept planform makes a one piece wing impracticable; it would require something outsize in model boxes to take it. The usual answer is to make the wing in two halves and secure them either by dowel and tube or tongue and box; types of fixing which are complex and vulnerable. In Sweep the problem is overcome simply by hinging the wing at the centre section, so that the two halves fold together. This makes for a shock-proof fixing and ease of transporting.

Construction The building of the fuselage follows standard practice and should present no difficulty to anyone who has built one or two models. See, however, that the wing mount supports are slightly hollowed out to take the dowel runners, and also that the rear peg anchor plates are cut from hard balsa.

Build the wing in two halves, using a template made from thin ply or metal for producing the ribs. The rib notches should be chamfered slightly to suit the angle of sweep. Note that each rib is notched into the trailing edge and also that each end rib is doubled up. A 1/16 in sheet platform is fitted at each root rib to take the linen hinge. The latter is a strip of adhesive tape cemented to the wing halves, to enable them to be folded back on each other. The stabilisers are built separately..." 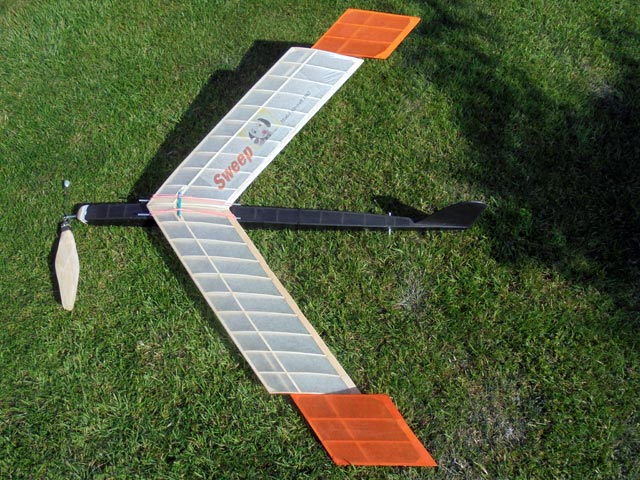