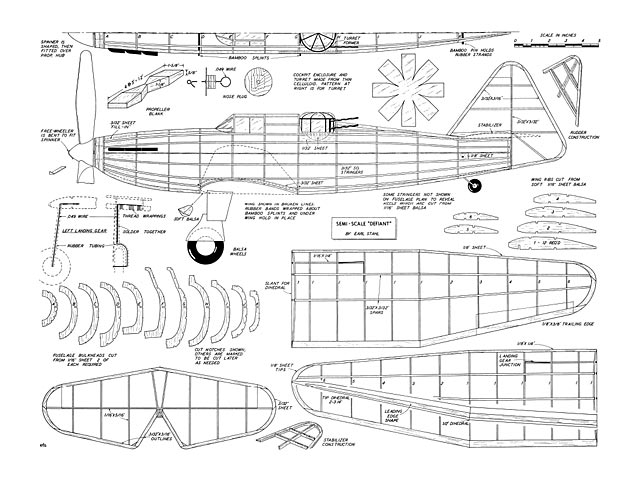 Quote: "ONE of the most outstanding developments of the current war is the multigun, power-driven turret for fighters and bombers. The Boulton-Paul Defiant, which has gained an enviable reputation as a night fighter in the defense of England, was designed to take advantage of this formidable weapon. These two-seater pursuits attack by flying alongside and slightly below the enemy, then with a broadside from their heavy-caliber guns they rake the opponent from nose to tail instead of the usual tail on attack.

An odd angle is that the gunner is captain of the ship. The pilot, who has no guns in front, is just the pilot whose task is to put the plane where the captain directs him so he can deliver a knockout blow. In appearance the Defiant somewhat resembles the famous Hawker Hurricane. However, because of its greater size and weight, it does not quite match it in performance. A maximum speed of 320 mph is enough to overtake enemy bombers; cruising speed is 280 mph, while landing speed is a comparatively slow 61 mph. Top fighting ceiling is around 28,000 feet, and cruising range is over 850 miles. A Rolls-Royce engine of 1,030 hp driving a three-blade, constant-speed propeller powers this deadly scrapper.

Being a semi-scale model, proportions have in a few instances been readjusted to assure maximum flight performance. Nevertheless, it is most realistic and captures the beauty of line of the prototype. If you doubt the flying capability of low wing models, this ship will surprise and please you with its powerful climb and speed. The author found his model to be exceptionally stable, even in rough air, and it is capable of making flights of creditable duration and distance.

Simple yet sturdy construction is featured in the semiscale Defiant, so any builder with previous flying scale experience will find assembly easy. Read all instructions to fix the method of construction in mind before starting work, then select all materials carefully. Finally, make the structure as accurate as possible.

If you are working from the magazine, plans must be enlarged to full size, otherwise work right over the large plan.

CONSTRUCTION The method of fuselage construction calls for the use of four keels cut to shape from 1/16 sheet balsa. To obtain their patterns, trace the top, side and bottom outlines of the fuselage. Bulkheads, also of 1/16 sheet, are cut in accordance with the patterns given. Cut only the notches shown, leaving the remaining ones to be cut as a later operation. However, mark their positions for reference.

Pin the top and bottom keels to position over the side view and then cement half of the bulkheads in place. Attach the side keel. When dry, remove from the plan and add the remaining bulkheads and keel. Stringers are 3/32 square firm balsa; attach the ones nearest the side keels first, cutting the notches with a pointed razor as required. Always attach stringers to corresponding positions of each side to prevent pulling the structure out of line.

Between bulkheads D and G, where the wing fits in, pieces are cut from 3/32 sheet to the shape indicated. Once the wing is finished, these pieces are trimmed so they will fit snugly to the wing's upper surface. Small blocks of 1/8 sheet are cemented between the stringers in the rear to anchor the rubber motor. Bamboo splints of about 1/16 diameter are cemented across the fuselage at the position shown so rubber bands can be wrapped about the ends and under the wing to hold it in place.

To represent the metal cowl of the real ship and strengthen the model at the same time, the nose is filled in. Accurately cut pieces of soft 3/32 sheet and cement them into the spaces between stringers and bulkheads A and B. The nose block is made from two pieces of 1/4 in sheet cemented cross-grain. Cut out the center for the nose plug, then roughly cut to shape and cement to bulkhead A. When dry, the whole nose is cut and sanded to a smooth, accurate shape.

The turret mount is simply a circular ring of 1/16 sheet balsa; it is shown on the top view. Fill In the section indicated on the plan with 1/32 sheet. Next cement the circular former to the upper stringers. A piece of sheet with the grain running vertical is fitted from the filled-in section to the round former on each side to complete the mount. Small triangles of 1/16 sheet are placed against formers G and H to fill in the corners not covered by the turret..." 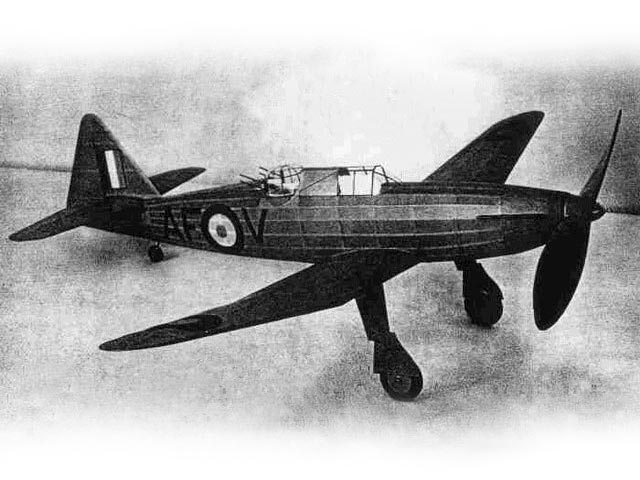