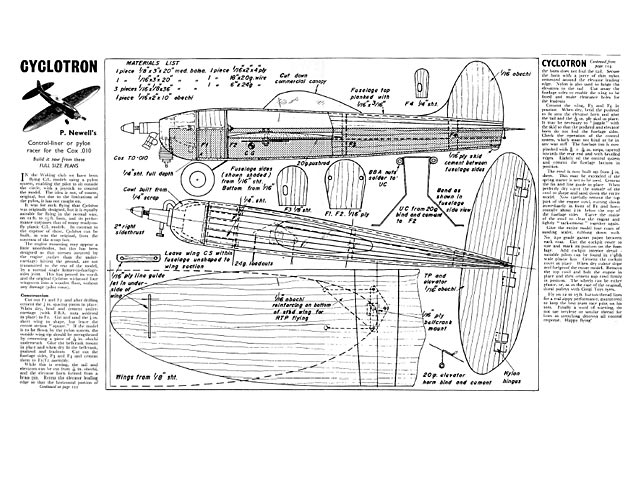 Quote: "P Newell's control-liner or pylon racer for the Cox .010 - build it now from these full size plans.

In the Woking club we have been flying C/L models using a pylon system, enabling the pilot to sit outside the circle, with a joystick to control the model. The idea is not of course original, but due to the limitations of the pylon, it has not caught on.

It was for such flying that Cyclotron was originally designed, but it is equally suitable for flying in the normal way on 12 ft to 15 ft lines - and its performance surpasses that of many ready-to-fly plastic C/L models. In contrast to the expense of these, Cyclotron can be built, as was the original, from the contents of the scrap box.

The engine mounting may appear a little unorthodox, but this has been designed so that stresses incurred by the engine (rather than the under-carriage) hitting the ground, are not transmitted to the rest of the mode], by a normal single former-to-fuselage-sides joint. This has proved its worth and the original Cyclotron withstood four wingovers into a wooden floor, without any damage (pilot error).

Construction. Cut out F1 and F2 and after drilling cement the 3 in spacing pieces in place. When dry, bind and cement under-carriage (with 8 BA nuts soldered in place) to F2. Cut and sand the 1/8 in sheet wing to shape, but leave the centre section 'square.' If the model is to be flown by the pylon system, the outside wing tip should be strengthened by cementing a piece of 1/16 in obechi underneath. Glue the bellcrank mount in plate and when dry fit the bellcrank, pushrod and leadouts Cut out the fuselage sides, F3 and F4 and cement them to this assembly.

While this is setting, the tail and elevators can be cut from 116 in. obechi, and the elevator horn formed from a brass pin. Recess the elevator leading edge so that the horizontal portion of the horn does not foul the tail..." 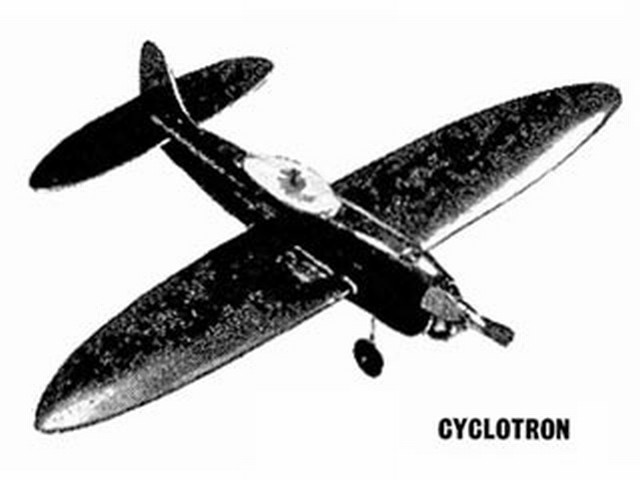