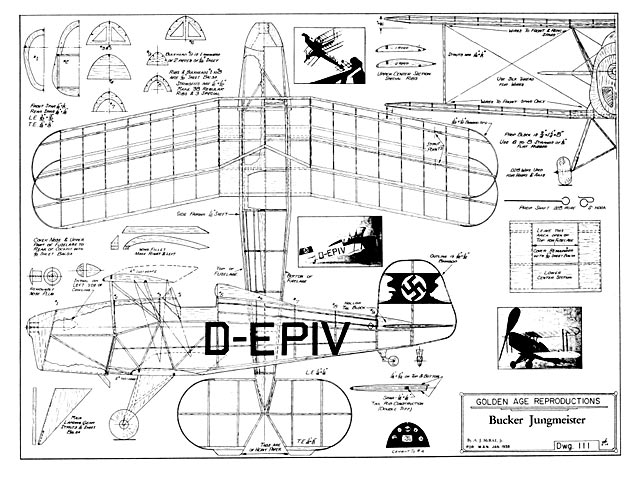 Quote: "Build and fly the Bucker Jungmeister ...how you can build a flying exact scale model of one of the most famous stunt planes in the world.

THE Bucker Jungmeister is a high performance German advanced training biplane. One of these ships has been flown at the past two National Air Races by the Roumanian pilot, Alexander Papana, who has repeatedly shown its high maneuverability by flying across the airport upside down at altitudes of from ten to fifteen feet above the ground. Papana uses this ship for all high precision aerobatics for which he is well known.

The Jungmeister lends itself very well for a flying scale model as it is well proportioned besides being of pleasing appearance.

The model described here is an exact flying scale model; that is, all the dimensions except the flying propeller are to scale. It is very unusual to find a model with a fuselage of this size that is not handicapped by an excessive wing span, small tail surfaces or a short landing gear.

Fuselage. Medium balsa is used throughout except where otherwise noted. The main framework of the fuselage is constructed of 1/16 square balsa. Plates No.1 and No.3 should be cut out and joined so that the sides of the fuselage may be built over them. After the sides are completed, plates No.2 and No.4 should be joined so that the upper and lower cross pieces may be put in place. Note that toward the front the lower cross pieces do not lie directly under the upper ones. At stations No.6, No.7 and No.8, the upper cross pieces are not placed between the longerons, but are lowered about 1/4 to allow the rubber motor to pass through.

Next cut the bulkheads from 1/32 sheet balsa but do not notch them until they have been cemented in place. Bulkhead No.9 is made of two pieces of 1/32 sheet balsa cemented together with their grain at right angles. The rear hook is attached to this bulkhead after which the hollowed out tail block is added. The stringers are 1/32 x 1/16 balsa.

The entire cowling and the upper part of the fuselage up to the rear of the cockpit is covered with 1/32 sheet balsa. This can be done easily by covering in sections between bulkheads being sure to get good joints. The sheet balsa should be well sanded; a coat of banana oil well rubbed in will aid in bending the wood. When the cowling is finished the nose block should be cut roughly to shape and cemented to bulkhead No.1. It can then be finished to the exact shape shown in the drawings.

The nose block may be left solid but be sure to drill the 3/8 hole for the nose plug. The nose plug, details of which are shown in plate No.1, should be made of hard wood if possible..."
Direct submission to Outerzone. 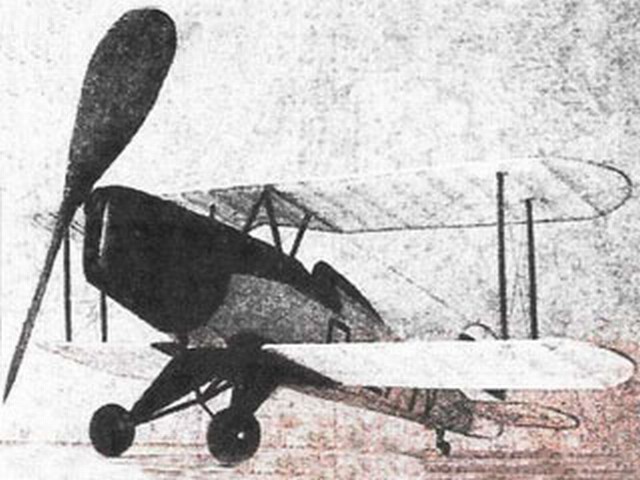 Hello, its not a "Jungmeister". It is a "Jungmann" Redards
anon - 05/05/2017
hmmm, but in January 1938 MAN, this is what they called it. This is the title they used, both in the article pages and on the plan itself. It isn't really an option now, to go back and make them do it again, differently. Maybe it's best to think about what we're doing here as recording aeromodelling history, and that includes the inevitable mistakes. Then again, maybe this is actually a model of the 1936 prototype Jungmeister, which had an inline engine rather than the later production radial versions.
SteveWMD - 05/05/2017
Plan has correct name: the Jungmeister Bu 133 was only a single seat sport biplane, the Jungman was only a two seat trainer biplane. Independently of the radial or inline engine.
Pit - 05/05/2017
Steve, Early Jungmeisters were powered with a Hirth inline engine of 135 hp.
JimHales - 05/05/2017
The plan is a depiction of the prototype Bucker Jungmeister which had an inline engine, unlike the more familiar version which was put into production with the radial engine your correspondent was probably expecting. The single-seat configuration is a bit of a giveaway.
LoppierBlondish - 05/05/2017
Nonono ... it's definitely a Jungmeister. The prototype and the two first production planes flew with a 140HP 6-cyl. in-line Hirth HM506 engine, later changed for a 160HP 7-cyl. radial Siemens Sh 14A in the rest of the production planes.
alcalaino - 05/05/2017
Pit is, of course, correct as always. The Jungmann was two-seater (although sometimes the front seat was faired over), while the Jungmeister was always a single seater. Thanks again
SteveWMD - 05/05/2017
If anyone is interested, I've just added the Profile publication about the Bucker Bu 131 Jungmann to RCLibrary, here: Profile 222: Bucker Bu 131 Jungmann. The differences between the Jungmann (Young Man) and the Jungmeister (Young Champion) are discussed on page 255.
Mary - 09/05/2017
Add a comment