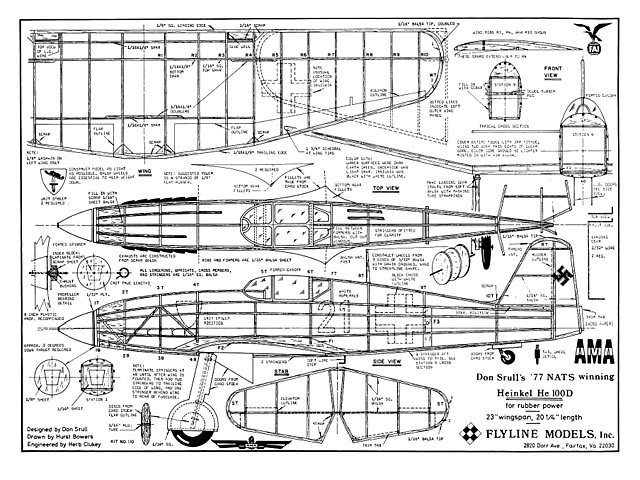 For many years, I had wanted to build a rubber-powered model of the Heinkel 100D. The airplane has a fascinating and somewhat mysterious history, but more important, I have always liked its sleek and graceful lines. Last, but not least, its very long nose moment, the tall and wide-track landing gear, adequate tail surfaces, and clean lines make it an almost perfect subject for rubber-powered scale. While low-wing models are a little more touchy to adjust than the more conventional high-wing cabin or parasol types, these problems have been exaggerated to the point that most people have been reluctant to try the countless and beautiful low-wingers that are just waiting to be modeled.

Clarence Mather has helped prove how competitive such models can be, with his winning, well-known Stormovic (oz1416) and PT-19 scale ships.

Until fairly recently, very little usable information was available on the Heinkel 100 series of aircraft. Worse yet, the little data that was available, shortly after the war, was both conflicting and inconsistent, so the He100D was kept in my 'models to be built someday' file.

In the last few years, however, an enormous amount of good reference information has been published on German aviation and aircraft. The He 100D is covered very well in both William Green's book Warplanes of the Third Reich, and in the Aero Publisher's booklet The Heinkel 100, 112. The latter publication has a wealth of photos, and a full color three-view of a particular HE 100D in full battle finish, including phony squadron markings (more about this later). I selected this aircraft to model in three-quarter scale, which gives a span of about 23 inches. The only appreciable deviation from scale in the model is an increase in dihedral.

By selecting and using light wood and keeping the finish to a minimum, the original model weighed in at about 1-1/4 oz without the rubber motor. At this weight, it proved to be a fine and consistent flier. An experienced builder could easily reduce the weight to 1 oz, and the flight performance potential would be increased significantly.

Although I intended the Heinkel 100D primarily for outdoor flying, I pressed it into service as my indoor scale entry at the 1977 Nats..."

Update 14/06/2017: As well as being produced by Flyline Models, this design was also published in MAN May 1978. We've added this article, thanks to RFJ. 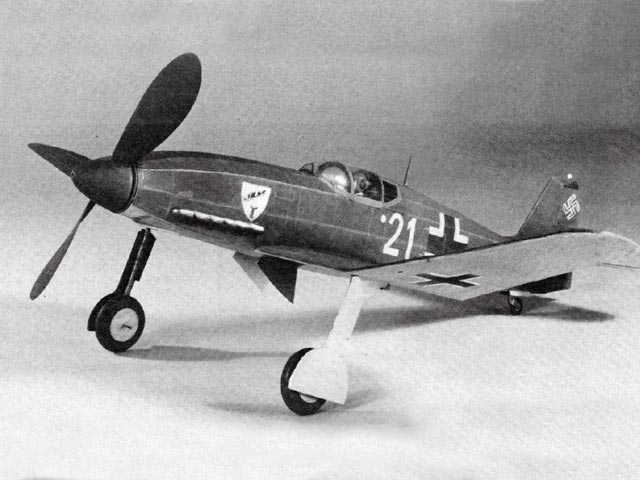