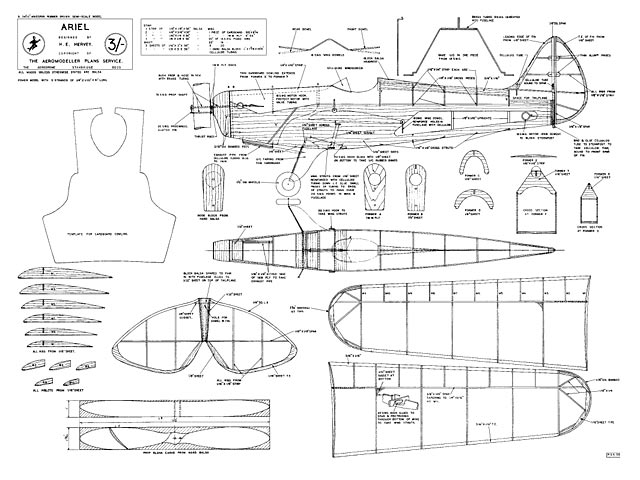 Quote: "The Ariel was one of two rather similar mid-wing monoplanes built during 1935 and early 1936 as a freelance design for a fast single-seater light plane of that period. Ariel was the second of these two models and after more than twelve years of active flying is still going strong. The model was completely stripped and re-covered for the first time last year after a collision with a car, but apart from new tissue and a section of the mainplane the model is flying with all the original components intact including the airscrew.

Fuselage Construction. First cut out the fuselage sides from medium weight 1/16 sheet balsa, sandpaper smooth and mark the position of all cross struts and the holes for the front and rear wire wing fittings, mark the hole positions very carefully so that they are exactly the same on both fuselage sides, otherwise there will be a difference of incidence of the left and right wing when the model is assembled.

Next fit the tail block and No.1 bulkhead at the nose. When these four pieces are fitted in position the fuselage sides will take a natural curve from nose to tail and the remaining cross struts and formers can be cemented in place. Note that 1/8 by 1/16 cross struts are fitted at all the former positions and the formers cemented on top of them, finally these cross struts are partly cut away to give clearance for the rubber motor.

The undercarriage is shaped from one piece of 18 gauge steel wire and is held in position by two pieces of celluloid tubing cemented between two fuselage cross struts, the rubber band shock absorbers are hooked in place with a piece of wire through the open cockpit. Before covering the fuselage sides cement celluloid washers at the points where the wire wing fittings pass through the fuselage.

The nose block is shaped from 1 in block balsa and is located by two pieces of celluloid tube reinforced with wire cemented into the rear of the block. These projecting tubes fit tightly into corresponding holes in the ply and balsa front bulkhead of the fuselage..." 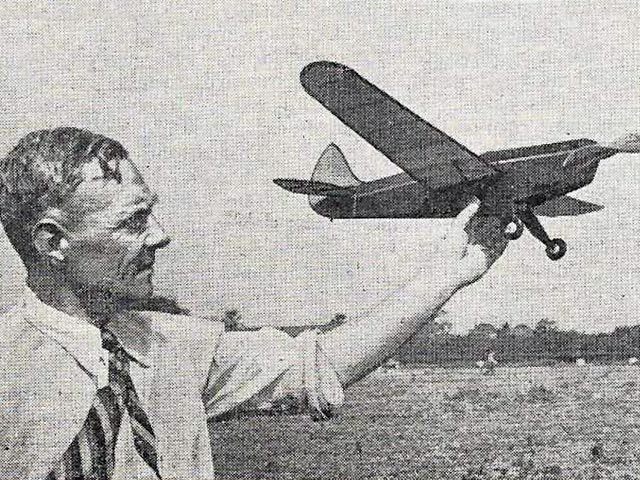