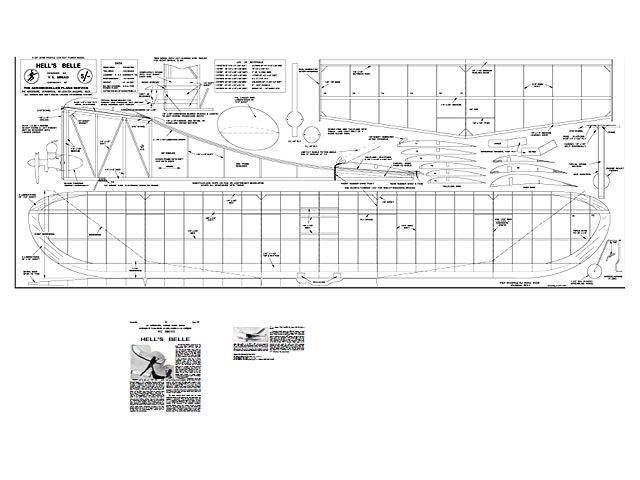 This is a modern redrawn version of the original plan by Vic Smeed. From August 1951 Aeromodeller.

Note the Hell's Belle was published in Aeromodeller as a 60 inch design. In the article it also mentions that three versions of the APS plan can be bought at three sizes (and names, and prices): Hell's Belle at 60 in for 5/-, Harpie at 50 in for 4/-, and Huzzie at 40 in for 3/-. We have no details of the exact differences between these plans, save the wingspans.

Note the supplement CAD file here (and the vectorPDF derived from it) is titled Huzzie and is scaled to 40 inch wingspan. A model builder of an enterprising nature might take one of these files and scale it up to either 50 or 60 inch, as required - although of course details like wood sizes and rib spacing etc, will be up to you.

Purists, look the other way! Hell's Belle is a strictly functional design in which everything has been sacrificed on the altars of Performance and Durability. With this job, which recognizes no loading or cross-section rules, the fuselage is regarded as merely a means to secure motor, wing and tail in correct relationship, and to provide a little side area here and there. The result is a little short on looks but quite long on flyability, and the Belle's slow, stately flight has a peculiar grace of its own.

Several models, rejoicing in such names as Boozer's Gloom, Flattened Fifth, Dominant Seventh, etc, went into its development; all these jobs incorporated the profile or near-profile fuselage, but variations were made in wing and power loadings, sections, wing and motor positions, etc. Performances were good on the whole, but each model had some vice or other - fragility, tricky trimming, and so on - which rendered it unsuitable for contest work.

Hell's Belle was designed to incorporate all the lessons learned in two seasons with the earlier models, and features such things as low wingloading (under 4 oz per sq ft, or about 2.7 ounces per sq ft of total area), low power-loading (7.5 ounces per cc), ruggedness and easy trimming. The first three flights, carried out on two fairly warm days, produced ratios of approximately 10:1, 18:1 OOS, and 35:1 OOS. The next few flights were in dead air and were devoted to trying to kill the single stall when the motor cut. The only contest success before the close of the 1950 season was flown in a 30 mph wind and steady rain; these conditions tested the model's ability to take punishment rather than its flying capabilities, and it tied for first with an average of a rather poor 5:1. A further series of tests in still air produced an average flight total of 1 min 34 seconds, for an average motor-run of 7 seconds.

The flying speed of the Belle is astonishingly slow, both in the glide and under power, although the climb is a tight, vertical spiral. Trimming is easy, and despite the low all-up weight, the job has shown itself capable of taking rougher handling than the average model. The fuselage is almost indestructible.

Construction is conventional except that only one fuselage frame is required, and that almost the whole model is built from quite soft balsa - soft enough to retain easily the imprint of a finger nail. If a larger motor than the original's Elfin 1.8 is to be used, there is no objection to a slightly harder grade of balsa being employed, although the prototype proved itself adequately strong..."

Update 29/10/2020: Added supplement scan of the the original print as published in Aeromodeller, thanks to Algy2. Note this scan is badly distorted, and really serves only as an illustration. 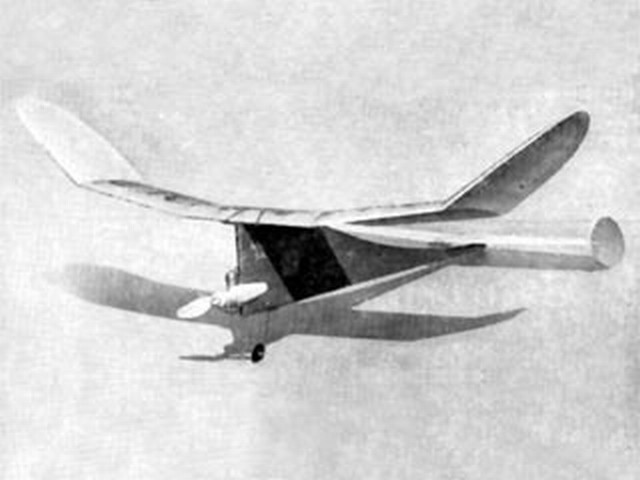