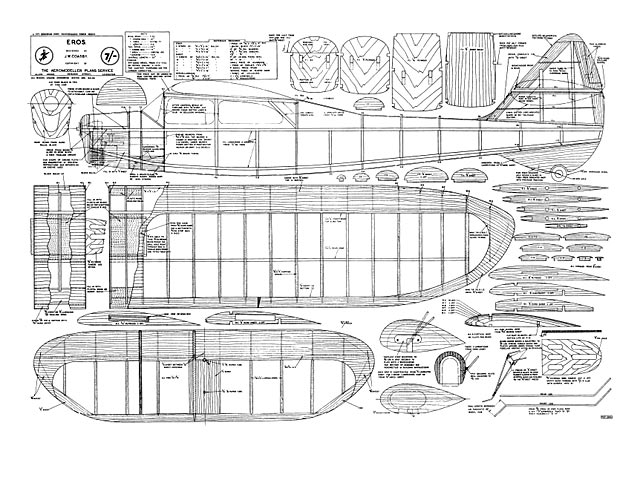 Quote: "THIS is a model which was built to a specification for a definite purpose and which has completely fulfilled the expectations of the designer. The design was made out to obtain a large power model for pleasure flying, consistent in performance, elegant in appearance, and rugged but simple in construction, which would look and fly like a full-size aircraft.

The fuselage construction is of balsa sheet over a former and longeron framework, which gives amazing strength with lightness. The all-up weight of this 7-ft span model is only 3-1/2 lbs! The engine, cowling is neat and effective, specially designed to make the engine fully accessible for starting. The model was primarily designed for the now famous Sparey 5 cc diesel, and this has proved an ideal combination, although the performance was no less sparkling with the alternative

Micron 5 cc installation. Consistent flying has also been obtained with a Kemp 4.4 cc. The undercarriage is strong and springy and is responsible for one of the most astonishing characteristics of the machine - its unbreakable habit of making a faultless three-point landing on almost any surface, not to mention taking-off.

This feature of the undercarriage combines with the flat gliding angle, stout construction throughout, and powerful anti-stall flat plate tailplane to provide as near a crashproof model as it is possible to make. On one occasion the machine inopportunely crossed the slipstream of a full-size aircraft taking off. The blast swung it right in a sideslip, although it did not spin, but the damage was confined to a broken prop, engine plate and centre section. As the engine plate is designed to give in a crash and the model went in under power, the damage was amazingly superficial.

The design of most of the components is a sound correlation between practice and modern theory. The wing chord being 12 inches, the model was reckoned to fly at super-critical conditions, and therefore a normal aerofoil was used instead of a laminar flow section, the choice going to old favourite Clark Y. The tailplane is mounted at medium-high position out of the downwash of the wing and in the best compromise between structural strength and anti-spin efficiency. Here it may be as well to point out that the model has never yet been persuaded to spin on any of the seventy or eighty flights it has made to date. The flat plate section was deliberately chosen in accord with tip-to-date theoretical trends as the most effective anti-stall section. Fin area is on the generous size, which has resulted in a weathercock stability that kites the machine up on every available breath of wind - the model soars like a sailplane when on the glide.

Stability all round is excellent, and the very low dihedral fitted has always proved quite adequate for all conditions, despite the mutterings of the pundits. The general excellence of the flying characteristics of Eros have been amply proved in all weathers.

Constructionally, Eros is simple but sound. The wings follow normal sheet-covered practice, with solid ribs and capping strips. Their shear-pin and tongue and box attachment is worthy of note. This is the answer to all the loose tongue trouble that so many modellers wail about, and a fairly obvious answer, too. It makes an infallible fixing that has worked without fail in all the knocks that the machine has received.

For the newcomer to power modelling this model is as good as any - for the experienced model flier it is a delight. Care in building, as in any model, plays a considerable part in results obtained, but the machine is so docile that there is considerable latitude in adjust-ment without the fear that the first and last flight will be interesting to watch. Incidentally, the spats have confounded all the endless critics of these decorations. They have no effect on the landing or take-off, even in grass - part of the secret of this being the gap at the rear to prevent the grass blades entangling the wheel..." 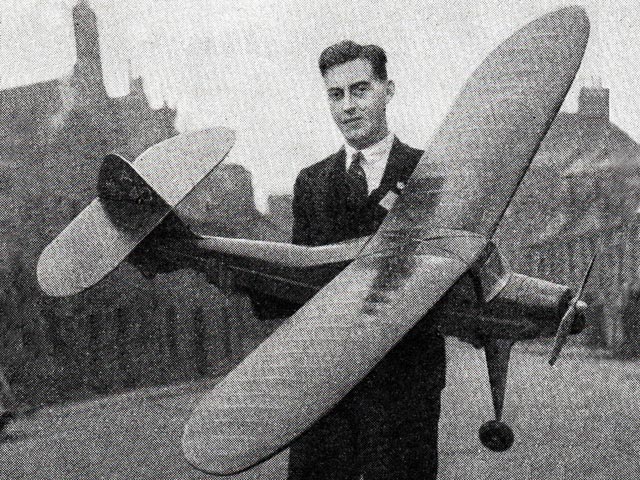 Please find enclosed attached pics of my full size (84" span) version of the Eros, if you'd like to use them on your site. Best regards,
Mark Sherlock - 05/02/2020
Beautiful, superbly finished flying model and a great background. Where did you the take pictures? That Spitfire MK.IX is a beauty!
Martin - 05/02/2020
Hi Martin, thanks for your comment.. the pictures were taken in the Britavia Hangar at Southend Airport in June 2011 when I worked there; the model was also built there!!. The spit and hurricane were visiting for parking only, the main business came from airliner maintenance.
Mark - 06/02/2020
Hi Mark, thanks for your reply! So I guess it´s Spitfire MK356 of the Battle of Britain Memorial Flight. Hadn´t seen the Hurricane at first glace, but the spinner and the airscrew can be seen. Cheers, Martin
Martin - 08/02/2020
Add a comment