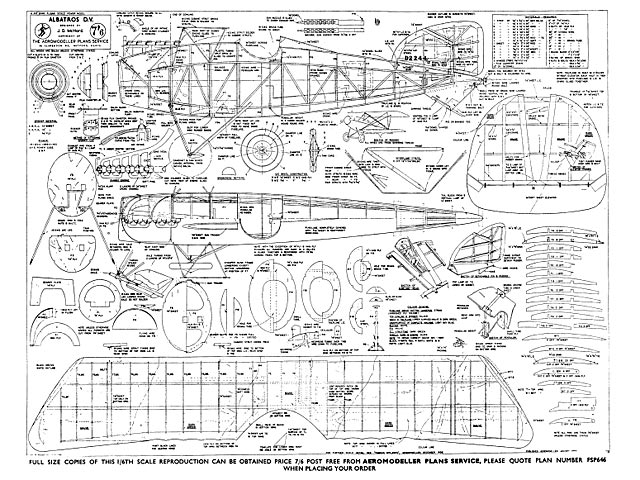 Quote: "The scale model you have been waiting for! Douglas McHard's superb 8th scale free flight model of the fabulous 1917 fighter - for 1.5 cc engines.

THE FULL-SIZE ALBATROS DV was a developed version of the famous D.III as flown by Von Richthofen and detailed by George Cox in his Famous Biplanes series last month. It made its first appearance on the Western front during 1917 and the most noticeable new feature was the beautifully streamlined fuselage which replaced the somewhat flat-sided shape employed by the earlier D.III.

Although no subject for the raw beginner to tackle, the elegant lines of this authentic flying model will fully repay the experienced builder for the extra effort involved. For this is truly a scale connoisseur's project. It is the most detailed single-engine scale-model plan in Aeromodeller Plans Service and the sight of the prototype in the air on flight tests, takes one right back to that famous era of two-gun biplanes fighting it out over the Somme.

One major reason why this model did not appear, as promised in our December issue, was because the flight tests called for further work on the design details. In our endeavour to see that the APS drawing provides full data for a foolproof model, we spent extra time on this beauty. An initial flying problem was that of side-slipping, which although most realistic in the extreme and probably a scale characteristic adopted from its full-size counterpart, was not the sort of flight path desirable in an otherwise stable model. Happily, this and other minor points have been overcome in the final design and with incidences, engine angles and the balance point specified, the Albatros is a certain flier and one in which all keen modellers will revel.

The 1/8 square balsa used in constructing the fuselage side frames should be carefully selected for its uniformity and firm texture, for upon the accuracy of this basic construction depends the entire alignment of the model. Build the two frames one on top of the other and when completed, allow them to dry out thoroughly before attempting to separate or remove them from the plan. In the meantime, cut out the bulkheads, paying particular attention to the plan notes on the material to employ.

The 1/8 ply bulkheads should be cut with a fretsaw. If 1/8 ply is not obtainable, a satisfactory substitute would be 1/8 inch hard balsa with 1 mm ply front and back. Where large areas are to be laminated (for example, the wheels and exhaust pipes), the drying time can be drastically reduced by employing one of the contact adhesives, such as "Evo-Stick" or Goodyear "Pliobond" in place of cement. A further advantage of this type of adhesive is the complete absence of warping.

The two halves of the 1/16th sheet formers should be joined together and reinforced by two pieces of 1/8 x 1/8 balsa as indicated on the plan. Formers Nos. 3, 5, 6, 8 and 9 are now assembled on the engine bearers and the lower flying wire anchorage hook cemented to former 9. Check the plan view for the correct sidethrust angle.

Bend the undercarriage main legs from 12 swg piano wire and bind them to the motor bearers. This binding is best done with copper wire and then soldered, however, tough thread will do provided you bind tightly, use sufficient and cement liberally..."

Quote: "It is indeed a thing of beauty, the detail is truly stunning and I remember that I would not have been able to draw the plan if I had not had a well battered and faded original to hand. The plan was published in the Aeromodeller of December 1957. As always, take care if you decide to build from the plan..."

Update 10/04/12: uploaded a colour version of this plan, for more clarity. 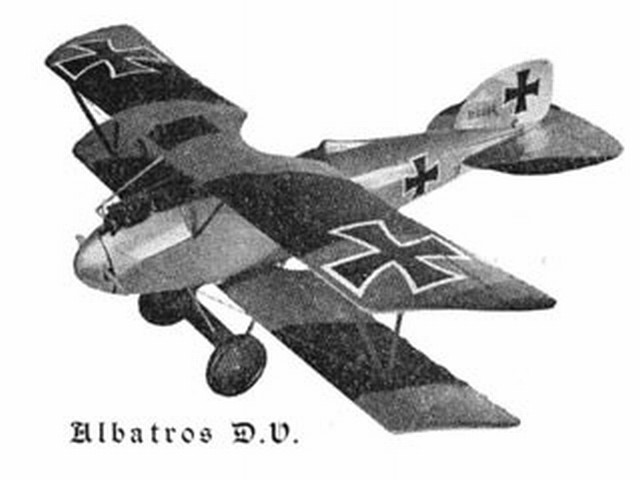