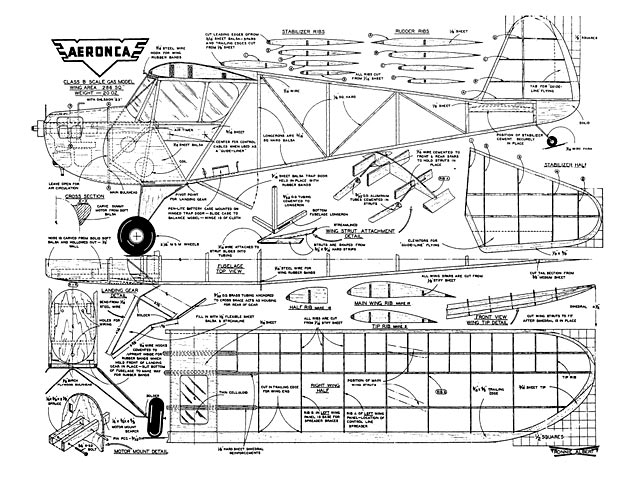 Quote: "Make your next contest ship look like a real airplane! This Aeronca is designed for stiff competition and includes all the usual contest model features. Aeronca Tandem, by Ronnie Albert.

AND now its scale gas models! Yes, sir, fellows, building and flying gas jobs the exact replica of the prototype is rapidly becoming one of the most popular phases of modeling. The fact is - and you can't deny it - that scale gas models were never given a chance to show their true worth. The 'experts' of years back decided, after building one or two scale models, the prototype of which wasn't of ideal aerodynamic design, that scale models won't fly - and then did a good job of selling the rest of us modelers on this conclusion. (That's how a lot of these things start, you know.)

To be frank, we were one of the lads thus influenced until recently, when we wanted proof of the flying efficiency of scale gas models. We noticed the fine aerodynamic proportions of the popular sport light planes, and with this as inspiration developed the model appearing on these pages - the Aeronca Tandem. And after watching it perform, climb into the sky and then settle for a beautiful flat glide, just like any present-day contest job, we say that if you want to build a gas model of contest caliber and still have a model that looks like an air-plane, this Aeronca Tandem is it.

Before describing the actual construction, here's a bit of information as to the general specifications. With a wipg area of 286 square inches and a total weight, with the Ohlsson 23, of only 20 ounces, the wing loading for this Class B craft is 10 ounces per square foot. Because of the straight wing and rectangular fuselage, construction is extremely simple.

CONSTRUCTION: Lay off both sides of the fuselage directly on the plan, using 3/16 square hard balsa for longerons and uprights, and then after the cement is dry, with the aid of the top-view outline, cement the cross braces in place, thereby forming the fuselage. Next, cut from 1/8 birch plywood the front bulkhead A-A and cement in place against the front upright. Add the motor bearers, which are of 1/4 x 3/4 spruce stock and reinforce the joint with plenty of cement. (Testers please take note.) Since the majority of Class B engines have the same distance between lug centers, the measurements of the pivot mounts should be as indicated. However, in case your engine does not fit the mounts shown, the thickness of the pivot mount should be altered accordingly.

After the pivot mounts are securely and accurately in place, our next job is shaping the nose. This is done by spot-cementing rectangular blocks of soft balsa directly to the front bulkhead and, after the cement has dried, carving the balsa until the desired shape results. Once the nose shape is completed, the balsa is cut loose from the bulkhead and hollowed out so an average wall thickness of 1/8 in remains. Apply a few coats of thick clear dope to the inside surface and then cement the unit permanently in place against the front bulkhead. To make way for engine installation and trouble shooting, the top of the nose is removable and held in place for flying with rubber bands.

Next install the coil and wires, and then cover the indicated section of the nose with 1/16 sheet balsa. All joints are then sanded smooth and given a few coats of thin clear dope..." 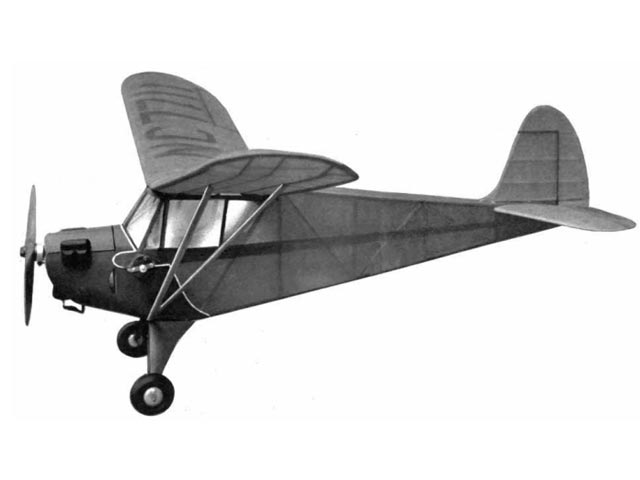