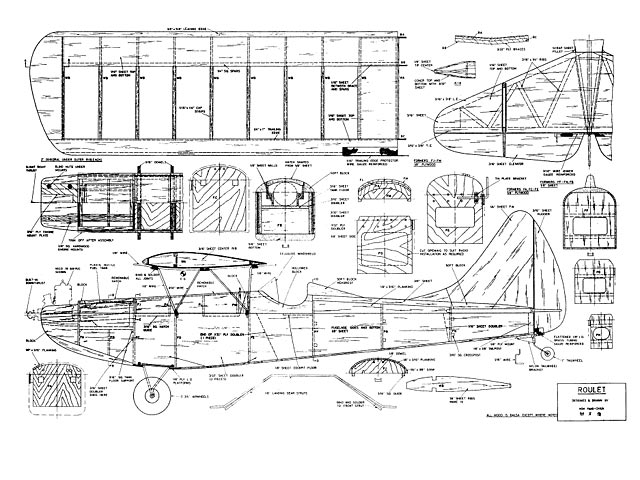 Quote: "An out-of-the-rut parasol-type design intended for the sport flyer. May be flown with any radio system from one to six channels, and takes engines of from .15 to .29 displacement. Simple construction, realistic, and no vices. Roulet, by Hoh Fang-Chiun.

Aiming for a different and nice-looking model intended primarily for sport flying, I chose the parasol-type design because of its scale-like effects and its excellent pendulum stability.

The basic idea of the Roulet was to provide simple construction and good flying characteristics in combination with a realistic appearance. It has also been designed with the effort to represent at least in some aspects an out-of-rut style, but without the sacrifice of simplicity in structure. Therefore, the construction of the model has been kept as simple and as conventional as possible.

As you will notice on the plan, materials specified are often generous in dimensions. I feel that it is easier and more rewarding to work with light, oversized wood than hard and thinner materials. Always select medium to medium-soft balsa wood throughout the entire structure and you won't face any weight problem of the completed model. The prototype has an all-up weight of approximately 4 lb.

Although originally designed for 6-channel operation, controlling rudder, elevator and motor throttle, the Roulet can also be flown as a rudder-only plane, using either servo or escapement rudder actuator. Because of the large vertical tail area, the rudder response is excellent, making ailerons superfluous on this model. However, builders who want to go 'full house' may, of course, add on either full-span or orthodox built-in tip ailerons.

The wing airfoil is of semi-symmetrical section. This type of airfoil was selected in order to provide more stable inverted flight characteristics as well as smoother inside and outside loops without too much loss of lift compared with flat-bottomed sections.

The model spans 54 in and has a wing area of 500 sq in. The powerplant may be any engine of .15 - .29 capacity. The prototype is powered by a .15 diesel engine and equipped with a German Variophon-Variton 6-channel radio set, with Bellamatic servos for rudder and elevator and a Servo-autoMatic servo for throttle, the installation of which is clearly shown on the photograph.

As you will notice, I did not specify any particular radio installation on the plan because there are so many suitable systems available on the market. However, I believe that no difficulties should be encountered in the RC installation since the fuselage compartment is amply dimensioned to accommodate either reed or proportional outfits.

Construction: Start with the wing which is built in two pieces, join at final as-sembly by adding plywood dihedral braces and balsa sheet covering. After cutting the ribs and spars, pin down the lower main spar directly on the plan over wax paper. Glue all ribs in place over the spar, except for the center rib. Be sure to prop up the semi-symmetrical ribs in alignment while the assembly is drying, otherwise you will have built-in warps in the wing which will be difficult to eliminate fully. Add top main spar..." 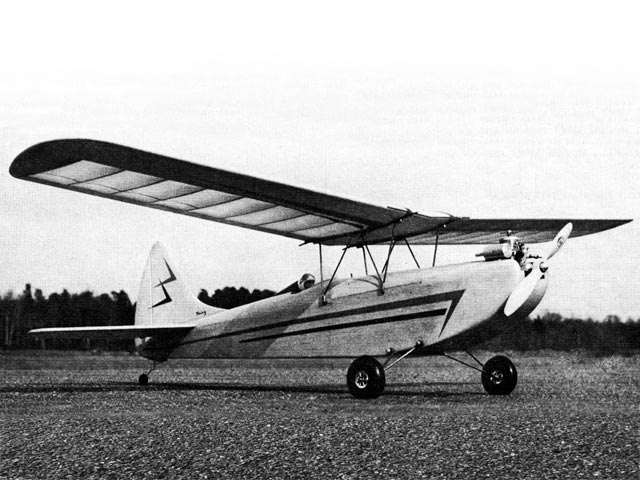