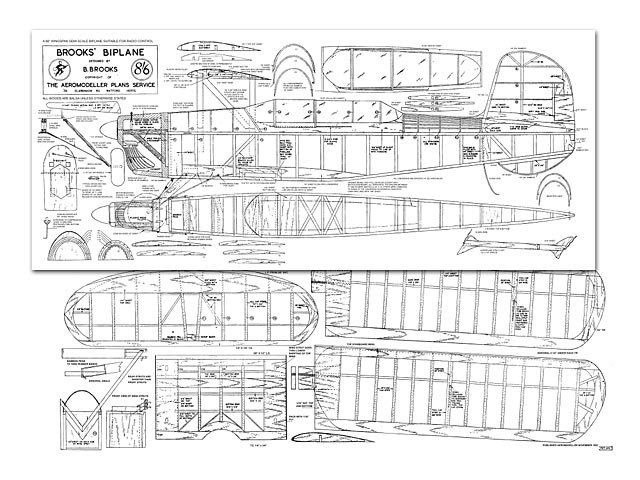 To many readers Basil Brooks and his biplanes will need no introduction. Over the years this designer and his models have become an accepted part of the scene at our major rallies and no visitor to Radlett, Northern Heights Gala or the Bowden Trophy competition can have failed to see one of his beautiful models giving a consistent performance throughout the day.

Consistency is indeed one of the outstanding features of this latest Brooks' design. The rugged construction coupled with a design that has been progressively improved upon over the years, has resulted in a model of exceptional pleasing appearance, a first class performance and of almost crash-proof construction. The latter statement is emphasised by the fact that the last three biplanes built by Brooks are all still in flying condition. One of the models is four years old and even the latest (described here) has been flying for over eighteen months. This is truly economical aeromodelling.

Secret of these soundly constructed models lies in Basil's long modelling history. He began building models in the early nineteen thirties when silk and spruce were still the vogue. Shortly after he joined the Blackheath MFC when this club was enjoying its heyday.

Fellow club members included such aeromodelling giants as Chasteneuf, Crow, Bullock and Eddie Cosh (who was then club secretary).

Guided by his club associates Brooks soon developed a style of his own and by the time war broke out, he was flying rubber powered biplanes of his own design. With the advent of the small diesel, all his modelling activities were devoted to powered biplanes. The result of this specialization is, in our humble opinion, that he is way out in front of this particular branch of aeromodelling. His attendance at any meeting adds character and atmosphere of the type most needed by the modelling movement.

Now, to look at the debit side of the account. This model will not be everyone's choice. There are few competitions for which it will be suitable (although this model's predecessor placed second in the 1950 Bowden Trophy). You will not be able to complete it in a few hours and it offers quite a challenge to your building prowess.

However, if you do want a model that will give you endless pleasure flying for fun and a model which will fill you with pride every time you take it out of its box - then this is for you.

Certain minor details have not been shown on the plan. For example, the cockpit of the original model is fully detailed with instrument panel and four bucket seats (built from 1 /32 sheet balsa) placed one behind the other. This type of detail is left for the individual builder to invent for himself if so desired.

In the same category, the air intake on the bottom engine cowling has a complicated " bird cage " built up of 3 /32 in. diameter bamboo. The designer suggests that it would be a simple matter to redesign the cowling to have a smaller intake and dispense with the cage altogether.

The model is powered by an ED 2.46 racing engine using 11 x 6 in plastic propeller. This is just about minimum power and an ED 3.46 or similar is recommended as being equally suitable. Removing the engine after installation presented some difficulty at first. This was overcome by slightly filing down the length of the exhaust ports.

Balance point of the model is (at the centre section of the top mainplane) two thirds of the chord back from the leading edge. It will be noted that there is a full inch back and forward movement on the lower wing. Trim is effected by this, also by packing under the tailplane. "

Quote: "Basil Brooks was the designer and flier of the Biplane. The model had been developed over four years until the stage at which the plans were published. It looks a really interesting and practical build and was even suggested as being suitable for R/C in 1952. It is an interesting design and one that would be well worth building nowadays - especially considering that, according to the article, it meets the pre-1950 deadline. The recommended minimum power is an ED 2.46 Racer with a preference towards a 3.46cc motor ...I think I would tend to start with a OS 40 FS and consider a OS 26 FS after initial flights. However with three channel RC it would give a sweet summer evening treat. As always with my drawings they are only tracings from the original articles and may be subject to faults ...If you do build from my plans please take care and measure at least twice before applying the knife. Most of all - enjoy."

Update 07/02/2017: Turns out this plan is 66in not 56in wingspan. Thanks to Brian for pointing this out. Will sort out resizing the files asap.

Update 09/02/2017: Replaced this plan with a better version (for now) at correct scale, with wingspan 66in, thanks to Edubarca. 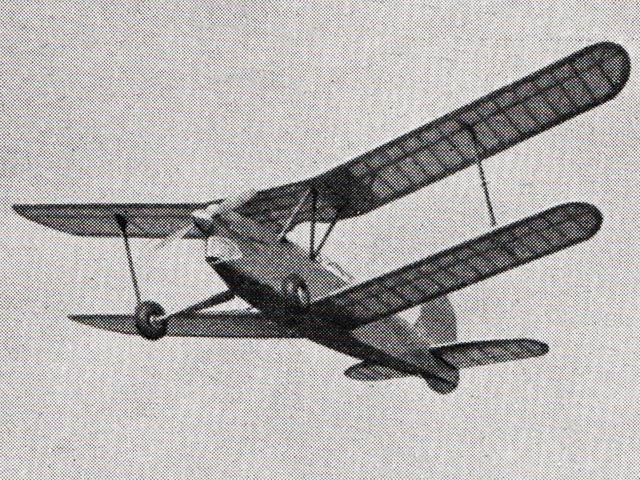