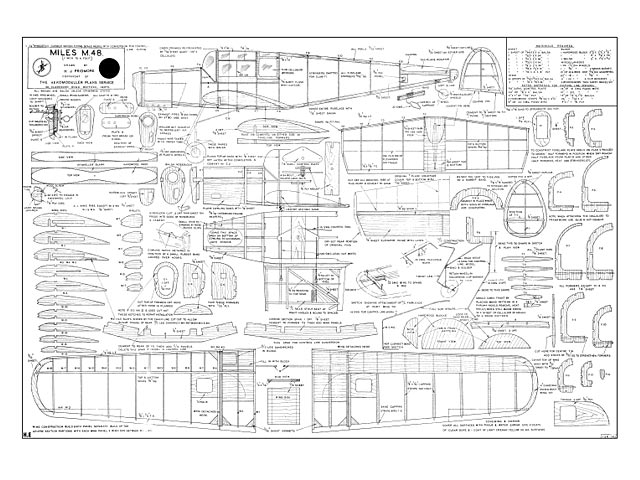 Note also converted for use as CL scale model, see below. Accordingly this plan is now also tagged IC, CL.

The subject aircraft seems to be a one-off variant of the Miles M.38 Messenger. Wikipedia says: During the war a single prototype M.48 Messenger 3 was built with fully retractable electrically-operated split trailing-edge flaps and a 155 hp Cirrus Major III engine. This model was not further developed as it did not provide any advantage over the other variants.

Quote: "THIS month's cover painting by our artist C. Rupert Moore, shows the M.48 which is a development of the well-known Messenger communications aeroplane used by 'Monty' during the war. 1/72 scale drawings with specifications of the full-size machine are given on page 560. As the drawing of this model is well detailed and many constructional features are clearly explained thereon, these building instructions are cut down to the minimum.

Fuselage. Pin keel to drawing, cement half formers in place, add stringers, and leave half fuselage until cement is set. Remove from drawing and cement on remaining formers and stringers. Glue on ply nose former, cement centre section spar in place, and proceed to cover fuselage with 1/32 sheet balsa.

After fuselage is covered, cement wing fairings in place, glue celluloid on for cabniand cement on strips of 1/64 sheet balsa to represent the frames. Finally add the tail-wheel and exhaust pipes and give the fuselage a very light rub down with flour paper (ie the very finest grade of sand paper).

Wings. These are built on the drawing in the usual way and when completed are very strong, It will be found easier to build one complete wing at a time, and then cut off the centre section afterwards. After cutting them off cement in wing boxes and ply tongues, and cement centre sections to fuselage, checking to see that they are set to give 4 in dihedral under each wing tip and 3 degrees incidence.

Tail Unit. This is easily built and no difficulties should be encountered, build up as on drawing.

Undercarriage. This is constructed from 16 and 18 swg piano wire and faired with balsa and paper tube. Bend wire parts to shape and solder where shown. Fair to the required thickness and sandwich top of legs into block balsa in leading edge of centre section. Push wheels on axles and solder on a small cup washer to retain them in place.

Propeller, etc. Carve propeller from a block of hard wood, such as deal or mahogany, to the sizes given on drawing and balance blades as finely as possible. Cement on a hard balsa spinner and bush with brass tubing. Cut and sand nose-block to shape and hollow out as shown.

Gear Box. Purchase one 5/8 in and one 3/8 in gear wheel and obtain some thin brass or dural sheet. As the detailed drawing makes assembly clear, no instructions will be necessary... "

Update 23/10/2017: Replaced this plan with a clearer copy thanks to hlsat, Aerofred. Note this version of the plan also includes details of conversion to control line flying.

Quote: "Miles M48 Conversion, by HJ Pridmore: Coming across my 1 in scale rubber-driven Miles M48 recently, which was described in the August 1946 issue of the Aeromodeller, I decided to give it a new lease of life by converting it for Control-Line Flying.

The result proved an outstanding success, and I thought that readers might be interested in the conversion. With the aid of the conversion drawing, together with the notes given here, any fairly experienced modeller should encounter no difficulty in constructing the model as a Control-Liner, from the original plans. Powered with the popular ED 2 cc diesel - either Comp special or Mark II - it has a really first class performance, and is delightful to fly. Wing-overs, vertical climbs and dives are easily attained, and the model will hold high level flight with the lines well over 45°.

Fitted with a stunt tank, and a well tuned engine, it should easily accomplish inside loops. Unlike many Control-Liners that just drop out of the air when the motor cuts, this model seems to float on indefinitely and, if a little care is taken, perfect three point landings can be obtained.

Control-lines from thirty to forty feet long are recommended, the shorter lines being used for windy weather.

So much for its performance, now for a few words to assist would-be constructors. Delete the fuselage formers marked F1, F2, F3, and F4, shown on original plan. Cement conversion half formers C3 and C4, (do not forget to face these ply) to keel.

If the builder desires to fit a stunt tank this should next be installed. It is suggested that it is built in between formers C3 and C4, and on the same level as the engine carburettor.

Next glue in the engine bearers and cement on former Cl, plank top and sides of cowling with 1 in sheet and sand to a smooth surface. Cut off the cowling hatch, cement in C2, and hinge hatch on port side with linen.

Construct wings as originally, but omit wing boxes and tongues together with ribs W3, W4 and W5. It should be noted that the wings are set at a slightly lower angle of incidence than originally, and that scale dihedral is employed.

Undercarriage construction remains similar to original with the exception that 14 swg is used for front strut and 1/16 swg for rear. Note that rear strut is bound to a spacer and does not slide between wing ribs W3, W4, W5, as originally. A small loop may be bent in rear strut to give better shock-absorbing qualities. 2-1/4 in dia sponge rubber wheels are recommended in place of the former 1-1/2 in dia. The incorporation of elevators to original tailplane structure, completes the conversion of the model. Elevators should have 45° up and down movement. Cover top and bottom of tailplane with 1/32 sheet balsa, link elevator horn to control rod and cement tailplane to fuselage.

Fins may be either built up as originally, or may be cut from 3/16 sheet soft balsa and sanded to section." 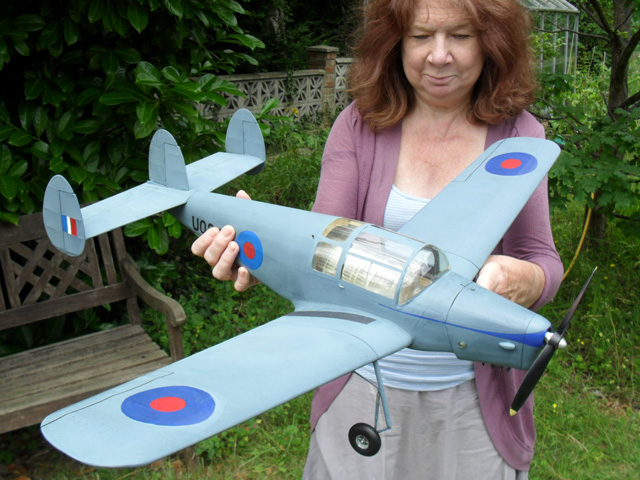 Hello Steve, Not quite stringer for stringer [see more pics], but I've framed up the Miles M48 using the Aeromodeller plan. The major modification is the use of a solid wing spar for electric RC, which is a simple part to fabricate, using the wing plan and formers for sizing. I'll be adding slotted flaps to build the model as an M38, which is otherwise identical to the M48. The build thread is at Wattflyer: http://www.wattflyer.com/forums/showthread.php?t=70139
Bill_G - 23/03/2013
Hello Steve, I finished the Miles M38 build [see more pics], and am really optimistic about this one with an AUW of 20.25oz and wing loading of 11.25oz/sq-ft, with the build slightly oversized beyond plan scale at 41". Only needed a small amount of lead imbedded in the cowl cap, to balance with a 3s-1320 lipo. I had forgotten the wing walks at the time of the photo taking below, but have added them since. Thanks again for the plan, as this has really been an enjoyable and rewarding build.
Bill_G - 30/04/2013
Hello. Thought you might like some details of my M48 interpretation [main pic, 009]. Built mostly as per the plan some 20 years ago, it is powered by compressed air motor. In fact it has had three different ones over the years; currently with a Chinese copy of the well known Z Model Italian designed motor. Original motor was a modified Air Hogs one. You can see the plastic bottle tank inside the cabin. It was a good flyer too once sorted; see the picture of me launching it one evening at Port Meadow (photo from Lindsey Smith). Sadly all those C/A motors went out of production years ago, which is a pity as they are totally Eco-friendly. Keep up the good work Outerzone
Peter Rea - 28/07/2021
Add a comment