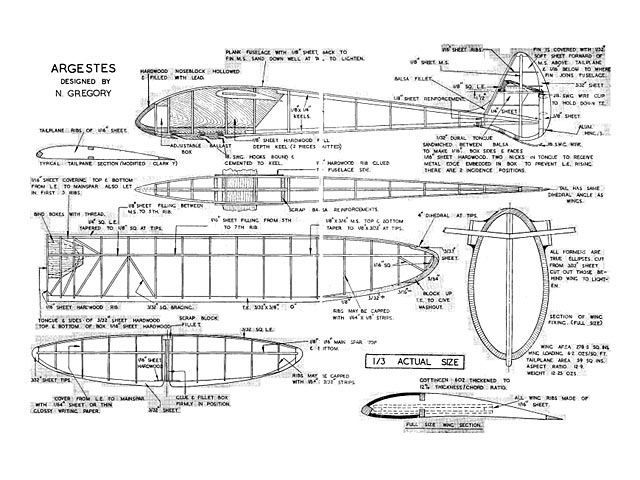 THE design of the model is almost semi-scale in appearance, indeed a moulded cockpit cover might well have been incorporated. The weight of all models increases with time and this is no exception! Its present weight of 131 oz gives a wing loading of 6.8 oz / sq ft, which is heavy for a model of its size and its fine glide is due to efficient flying and not featherweight floating. It will be noticed that over 44 oz of the model is dead weight in the nose. This might have been avoided by building a longer nose or by putting the wing further back. The answer to this criticism is that I wanted to build a model with its wing right on top of its nose. Mick Farthing and others have used this layout with good results in the lightweight class.

The model gets out of a stall after a very few pheugoids, for although the total weight is increased the moment of inertia about the CG is small and the momentum is still there. Unlike the lightweight class, I have taken advantage of the long tail moment arm to reduce the tailplane area to a minimum. Notice the novel crashproof positive fitting on the tailplane. It uses no rubber bands and works very well.

In my particular model, the planking at the rear was left unnecessarily thick; removing a little weight here might well result in an ounce or more off from the nose. In the Thurston Cup on Epsom Downs the model put up a flight of 410 secs OOS which lost me the model, but it was fortunately found and returned later in the week.

Order of Construction. Make the tongues and boxes first. There should be 2 in between the working parts of the tongue to allow for fuselage width. Build the wings around the boxes, the bottom spar will need slight cutting away and the top spar packing up to fit on to the box. Do not forget to pack up the trailing edge at the tips to give the required washout.

The bottom sheet should be fitted and glued first, then fit the top sheet, and cement while the wing is pinned down with washout incorporated. The tongue should now be boiled in water for a few minutes and then bent at the centre to an excessive dihedral angle and clamped. When dry (overnight), the tongue should he flattened out until the wing has 4 in dihedral at the tips. Two dihedral retaining pieces from scrap balsa should be glued on the bottom until the tongue is ready to be incorporated into the fuselage.

Make the tailplane next. This has the same dihedral angle as the wings, and the tongue should be used as a dihedral board when setting this. Make full depth fuselage keel. Incorporate towing hooks and glue in tongue, adding bulkheads four and five. Make tailplane box and tongue. Cement latter into main spar, adding rib F3, trailing edge, and underfin. Cement on to rear fuselage keels and complete fin. Cut out bulkheads and cement into place.

Cement the halves of fuselage together and plank, Leave a space between bulkheads 1 and 2 for a trap door for ballast. Complete by sheeting in front of fin. Sand smooth, sanding thinner at back. Fill with banana oil, sanding between each coat, The nose block is carved from hardwood, hollowed and filled with lead and glued on. Complete by cementing box on to tailplane and adding upper fin.

Trimming: Start with CG near one-third of the chord from the leading edge and move back till stall just not present. Then increased tail incidence position can be used in windy weather." 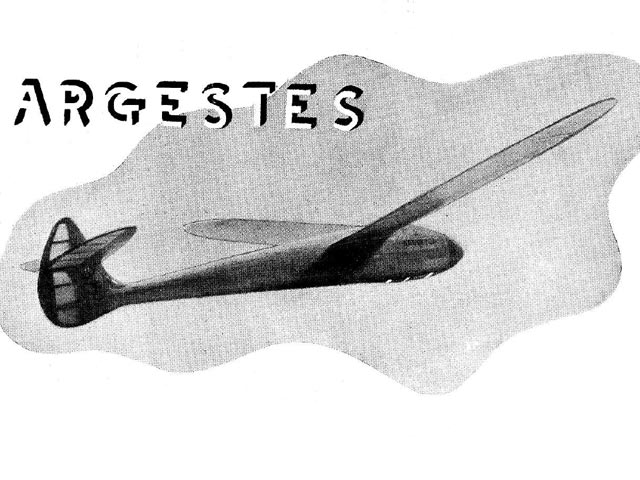