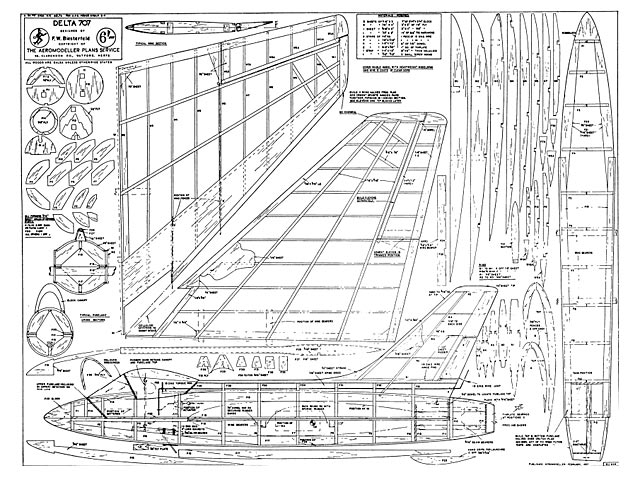 Quote: "A semi-scale delta for radio control or pure free flight with a pusher 1.5cc diesel. Simple to build and of stunning appearance.

ONCE IN A WHILE we are blessed with a model design that is completely out of the rut and capable of outstanding performance. We congratulate Ing. F. W. Biesterfeld of Hameln in Germany, for his enterprise in developing this remarkable design which has already gained a great reputation in his native country and overseas, following its appearance on the television screens.

Our attention was first drawn to the Delta 707 when photos were submitted for inclusion in our Model News feature of August 1956, where we showed a view of the complete model and another with the upper fuselage removed to display radio control components. Then, the power unit was a 1 cc Taifun Hobby diesel and the 707 was said to have a very fast flight speed, while turns could be held on for a long time without fear of the model developing into a spiral dive.

Since publication of those photos, Herr Biesterfeld fitted a Taifun Hurrikan (as reviewed in Engine Analysis, January 1957) and the increase of 50 percent more power naturally stepped up the performance into the spectacular class. It is therefore our pleasure to present this design through APS and we are sure it will have a large following, not only among the radio control fraternity, who like to have something new, but also among free-flight sport enthusiasts, for here is a virtually unbreakable model, and despite its beautifully streamline exterior, it is extremely easy to construct.

It should be noted that following the success of this model, which was in the first place intended to be a flying test bed, Herr Biesterfeld now has a larger version with a 5 cc glowplug engine and a six channel receiver operating motor control, rudder and elevons.

Technical information for the radio men is that the Delta 707 has a total area of approximately 500 sq inches and complete with an Aeromodeller Receiver and standard lightweight actuator with all batteries, the total weight is only 33 ounces, giving 10 ounces per square foot wing loading. An undercarriage is not necessary, but to protect the underbelly, a wire skid is fitted under the nose.

Access to the interior is a simple matter of lifting off the upper fuselage, half which is retained by the dowel at the rear of the engine bulkhead and elastic band up front. Basic constructional details are provided on the drawing, but in brief these are as detailed in the next column.

The mainpiane is built in four quarter-sections, using the two opposite halves which are drawn on the plan to construct the four flat bottomed aerofoils. These are then paired-up with small pieces of 1/16 sheet, joining the rib halves together (as indicated on W1, 2 and 3) and the result will now be two symmetrical wing halves, which are then subsequently joined on to bearers projecting through the fuselage lower half.

Fuselage halves are built in turn over the top profile, using the side keels F19, 20, 21, to locate the quarter formers, which butt up to the relative top and bottom keels. The engine bulkhead, F12, is then added to the lower half and the nose block also fitted, together with the fixed portion of the upper half between Fl and 2. Root ribs W1 are added to the top and bottom sections and the wing bearers fixed at the correct alignment across F6 and 8.

Now mount the engine bearers and F13, leaving the engine cowling to be completed after the initial trimming flights.

The fin and dorsal spine which carries the actuator wire, are straightforward assemblies and all that needs to be added are the separate wing halves on to the wing bearers, needless to say, using extra strong slow drying glue for this vital operation.

Radio installation is indicated on the drawing and it is recommended that the final balance is obtained by shifting the batteries, the nominal position is shown between F2 and F3. These are best mounted with a surround of foam rubber to prevent them bursting through the exterior planking on. the fuselage in the event of a crash. Herr Biesterfeld recommends that the first flight tests be made without either the radio gear or the engine operative. In fact, the model is tested solely as a glider and he prefers to undertake slope soaring, which gives him a glide distance of about 500 ft..." 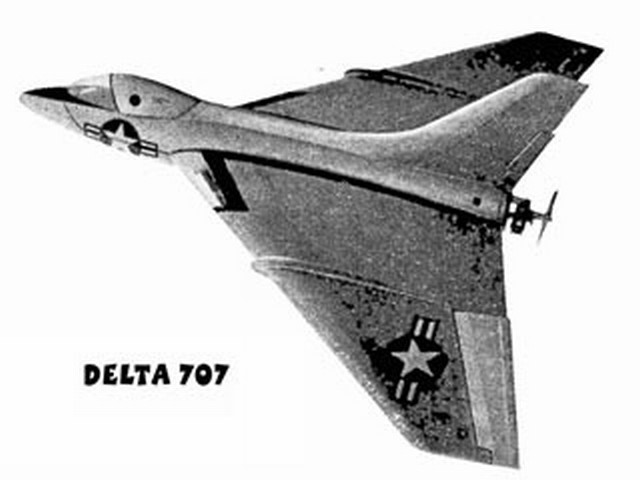