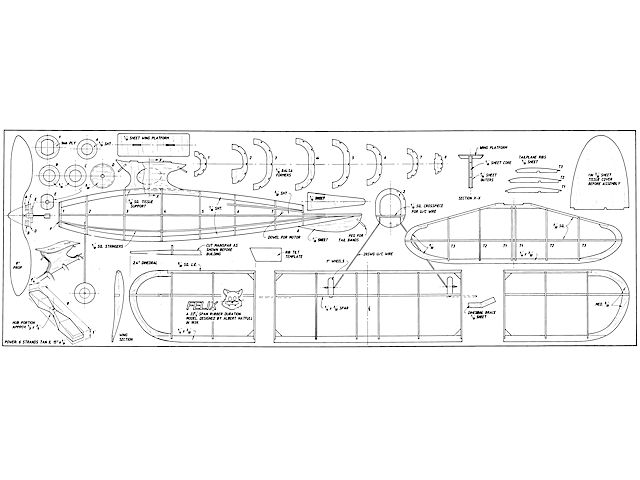 Albert Hatfull, famed designer of so many Keil Kraft kits, was born in September 1926 in North London. He began aeromodelling at the age of nine, being fascinated by all aspects of the world of aircraft. This led to building a series of flying scale kits, mainly by Megow and Lindberg. This early experience gave him the love of flying scale models which has remained with him ever since.

He and friends formed a model club with flying sessions on the local Lea Marshes. Albert built an impressive number of models including 'Pacific Ace', 'Clodhopper',' Burd Korda' and 'Cloudcraft Commander'. The club eventually merged with the famous Northern Heights MAC and by the end of 1939 Albert was flying his own designs, one of which was 'Felix'.

During WWII he was commissioned by Eddie Keil to design a glider kit. Albert produced the Invader (oz418) - a KK favourite ever since. This was the beginning of an association which was to last throughout the Forties and Fifties. It produced such classics as the Junior 60 (oz9995), the Senator (oz472), the Orion (oz8832) - almost all the range of small flying scale kits, and many others. He also designed large flying scale models. A range of ten was intended but only three were produced.These are now being demon-strated with great skill by Doug McHard. Aside from his Keil Kraft work, Albert designed kits for Elite and Worcraft. He also produced plans for Aeromodeller and Model Aircraft including the President (oz293) and Penny Rocket (oz2877).

Today, Albert and his wife Jean live in quiet retirement in East Anglia. He does not enjoy the best of health but is cheerful, nevertheless. If asked, he will express mild astonishment that so many of his designs are still built and flown, but will say that he is very pleased if they have brought pleasure to a lot of fellow enthusiasts. That is what they were intended for. Thanks, Albert.

BUILDING FELIX - BY BILL MORLEY: I first saw a photograph of the 'Felix' in Albert Hatfull's scrapbooks and was taken with its unusual design for a small model. Unknown to me, Albert set about re-creating 'Felix' from the photo and from memory. Some months later, a plan copy arrived on my doormat and, upon seeing it, it became an immediate 'must build'.

Despite its streamlined fuselage, the 'Felix' is easy to build. The stringers should be fairly hard and should be added alternately on left and right sides to avoid a banana shaped fuselage. The undercarriage should be installed after adding the central stringers and the two above them. On Albert's original, the U/C was sewn in, but I fixed mine in with 1/16 sheet balsa, as per the Korda Wakefield. The pylon, being laminated, can be made of the very softest quarter-grain balsa.

Felix is a cracking flyer and very easy to trim - mine flew straight from my hand, needing only 1/64 in down-thrust to complete the trimming. If you wish it, 'Felix' will give you contest performance - mine goes straight up and, unlike many small models, actually GLIDES!. Have fun." 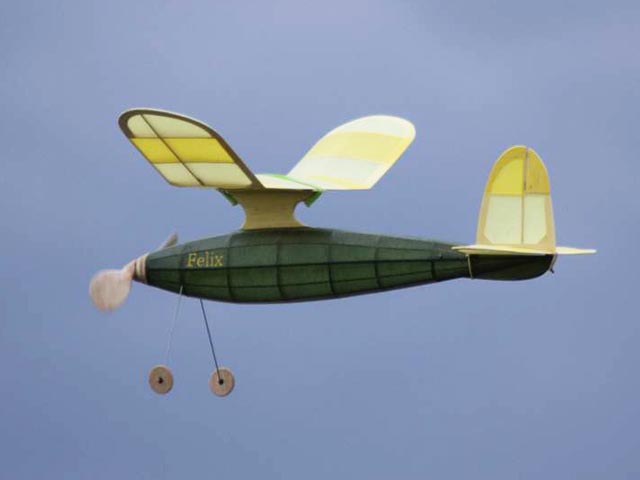 I'd like to share my foto with you, it is the barebone Felix, Outerzone planID 1639 [more pics 003]. Thanks for your great sites, I visit them nearly every day.
AndreasK - 08/01/2018
Hi. This photo of the flying Felix [main model pic] was taken by Roman Groener at the rubber engine meeting in Holziken, Switzerland.
AndreasK - 21/03/2020
There's some video of the Felix in flight at https://www.youtube.com/watch?v=rwmojC4wSfg
SteveWMD - 11/04/2021
Add a comment