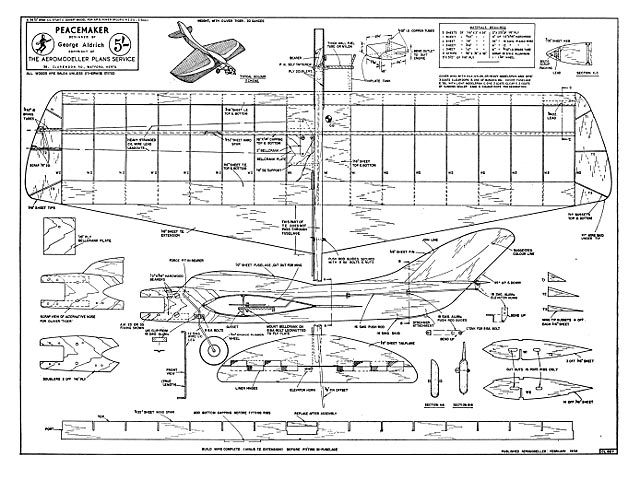 As you can easily see, this set of rules is designed to make a contest really move along. Which, with the mass of entrants in combat events is most necessary. It is also advisable to have more than one circle for obvious reasons. Then the winners from each of the circles can vie in a grand finale, which is a great crowd pleaser.

Now, we come to my little Peacemaker. The pre-requisites for any combat model are as follows:

I have flown my Peacemaker with a variety of both diesels and glow plug engines in the 2.5 to 3.5 cc class. Speeds ranged from 65 mph to 80 mph. This is in great contrast to our models over here in the US where we have no noise problem. My own Flite Streak design is flown at speeds above the 100 mph. mark with the Fox Combat 35 for power.

The construction is very easily seen on the plans, however, there are a few hints which may be of aid.

Any stunt model be it combat or precision is built around its wing. Therefore, if your Peacemaker is to be a top performer, you must have a straight wing. After slipping the wing ribs on to the 3/32 sheet spar, add the leading edge and then the trailing edge but do not cement the ribs to the spar. In this way the wing can be properly aligned. The 1/8 x 1/4 spar caps are now added. Now cement the three centre ribs into place, and install the 2 in bellcrank and leadout wires.

The tips are now cemented in place and the if o.d. tubing lead-out guides installed on the bottom face of the in-board wing tip. The centre planking of 1/16 sheet may be installed and now the remaining ribs are cemented on all sides to the I beam spar. The wing is now ready for sanding.

After completing the fuselage the wing may be installed and the sheet trailing edge pieces cemented in place. A strip of gauze should be cemented all around the wing where it passes through the fuselage..." 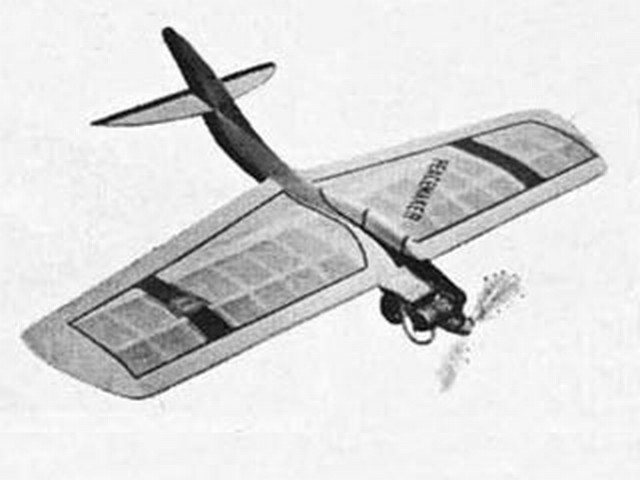