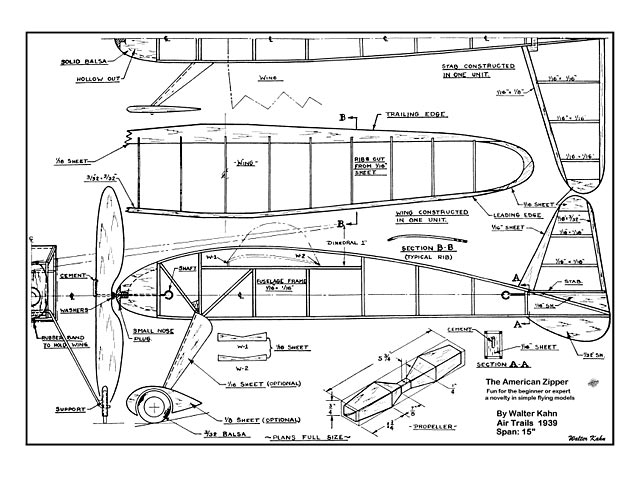 Quote: "ALTHOUGH the American Zipper is comparatively small, it is unique in that it possesses the qualities of a contest ship. Its fast rate of climb and flat gliding angle are a combination always hoped for but seldom realized even from contest ships. On a calm day, without the aid of thermals, the model was clocked to the tune of one minute and thirty seconds. But let's dispense with the usual run of introduction and get right down to work. With the exception of one half of both the wing and stabilizer, the plans shown on the following pages are full-size and complete. Since both sides of the wing and the stabilizer are constructed in one unit, it is first necessary to trace the side of the part shown to serve as a layout for the other side. As the plan is to be used as a jig, it is suggested that it be covered with translucent paper, preferably wax. This will prevent the parts from adhering to the plan..."

Update 17/10/2017: Replaced this plan with a clearer copy, now also stitched onto single sheet, thanks to rchopper56.

Quote: "Hi Steve and Mary, I could not pass this one up. Just had to join the two plates together. It is just too cute or maybe the way it is drawn that just makes you want to build one. May someday do a CAD rendering. Gene" 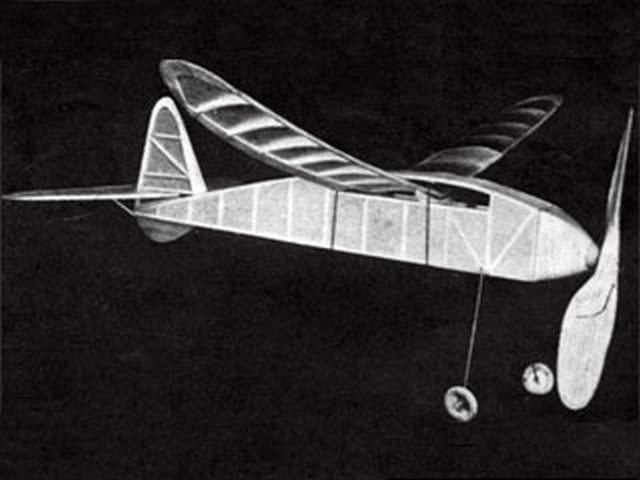