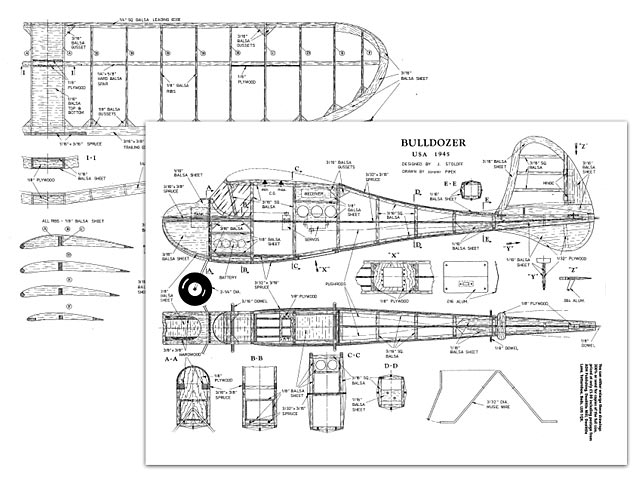 The Jerry Stoloff FF Bulldozer (oz928) was first published in MAN May 1945. This here is a later version, modified for R/C by Jaromir Pipek with a couple of other mods by D Boddington.

Quote: "What appealed to me with the 'Bulldozer' was its lineage, it had started life as a USA free flight 'gas' model, its appearance, its compact-dimensions and the fact that it has rarely been seen at the vintage meetings. The idea, then, was to build it for R/C, but to make the radio package easily removable so that the Bulldozer could be flown as a free flight model. This method of free flight trimming by radio is described elsewhere.

I have to admit that it was not the name that immediately made an appeal to me, hardly the most beautiful and flattering for a nicely proportioned lady. Jerry claimed that the model lived up to its name, he said that from the moment the wheels leave the ground and the ship points its nose skyward, nothing can stop it. Be that as it may, contemporary names, such as the 'Homesick Angel', have more poetry to them.

Designed with the beginner to gas (petrol IC in 19451) in mind the model was considered to be an 'easy-build', with sturdy construction suitable for the novice. It was also sufficiently rugged to absorb a reasonable amount of punishment, almost inevitable during the trimming phases by a newcomer to power flying.

The airfoil of the wing is one that had been well proven, even by 1945, the polyhedral was and is one of the most efficient forms, only a fully dihedral would be better. Lifting section tailplanes have always been a little controversial, but the theory is that it adds to the overall lift of the aeroplane and more importantly, reduces the looping tendencies in a high speed climb. By increasing the lift at the tailplane as the speed builds tip, the tail rises and holds the nose down, eliminating the desire of the model to perform large looping manoeuvres.

When trimming for duration contests it was also necessary to ensure that the model was trimmed for a spiral climb, this also prevented the 'over-the-top' and into the ground flight pattern. Those of you building for gentle power R/C flying with the 'Bulldozer' could probably substitute a flat plate tailplane without causing any problems - perhaps improvements... " 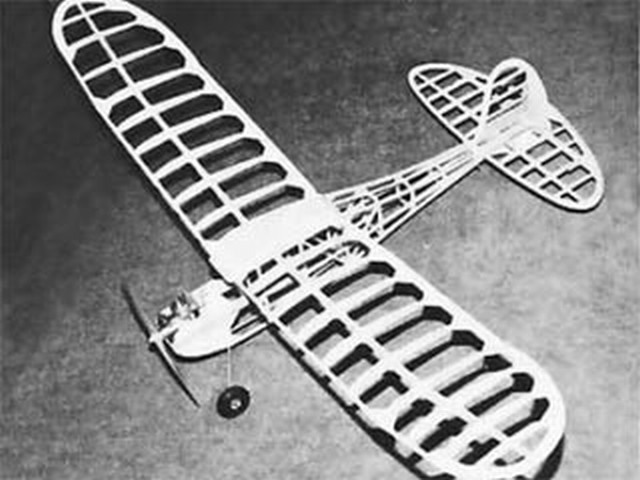