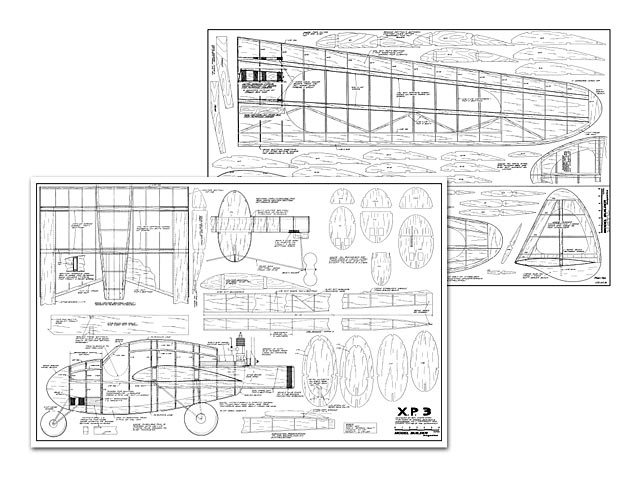 Originally designed by Ben Shereshaw in 1939, this is a later re-drawn version from MB.

Quote: "Thought I'd send you these files as they are full size and also show a radio control conversion to rudder/elevator plus possible positions for ailerons".

Whenever a group of modelers begin to talk about great gas model designs of pre-World War II, it is only a matter of moments before someone brings up the name of Ben Shereshaw, and his most famous design, the Custom Cavalier (oz335). This model was the epitome of the large, graceful, streamlined, super-soaring, beautifully constructed gas model. It was a typical Shereshaw masterpiece, with a completely strip-planked, streamlined fuselage and long, gracefully tapered wing panels with sheeting all around the perimeter, and caps on the ribs. This nine foot span model was kitted by Berkeley, and was the 'Top of the Line' for many years.

Well, in our own opinion, the Cavalier wasn't Ben's greatest design. We had seen several photos of his Twin Boom pusher series, and remember one in particular that was photographed in the act of earning its nickname, the 'Woman Chaser'. Three-views of a couple of variations also appeared in Flying Aces and in a late 1930's Zaic yearbook. But the one that really convinced us of the Twin Boom's design superiority was this XP-3, which appeared in the Model Builder's Handbook, a 1939 publication by Fawcett.

Though we have studied the XP-3 drawings many times over the years, no serious move was made to build one until recently. About a year ago we had Phil Bernhardt working on the drawings between other Model Builder monthly projects. We developed a more efficient wing joining system, and included alternate construction for an R/C version.

We mentioned the project to Ben Shereshaw during last year's WRAM Show in White Plains NY, and he was able to dig out the photo showing Charley Kinney with his XP-3. When the drawings were completed, we decided not to publish them until we'd had a chance to build one first - and maybe have the only one in existence, at least for a little while. At this point, however, it would seem that if we wait for our own to get built first, the plans would never get published - so here they are!

Early photo of Charley Kinney with his XP-3, built from Ben Shereshaw's plans. It appears to have a mudguard over the main wheel that shows. Metal strap wing-joiners can be seen.

As usual, except for the wing joining system, we have left everything original, figuring that any modeler who is capable of tackling the project is also capable of making his own modifications. The original wing joining system consisted of top and bottom aluminum straps, with long bolts going all the way through the wing. Hardwood webbing filled the space between top and bottom spars at the bolt locations.

Rigging R/C out to the tail surfaces through the booms can be a bit tricky. One way to ease the problem is to build the pod, center section, booms, and tail surfaces all as one unit - but you had better check the overall dimensions of this assembly against travel space you have available!

And watch that construction weight. Remember that in Texaco competition, the maximum fuel allotment stops at 7 pounds!"

Update 7/12/2021: Added further article from Modern Mechanix 1938, thanks to Pit. This is well worth a look, includes many further drawings showing construction and assembly details. 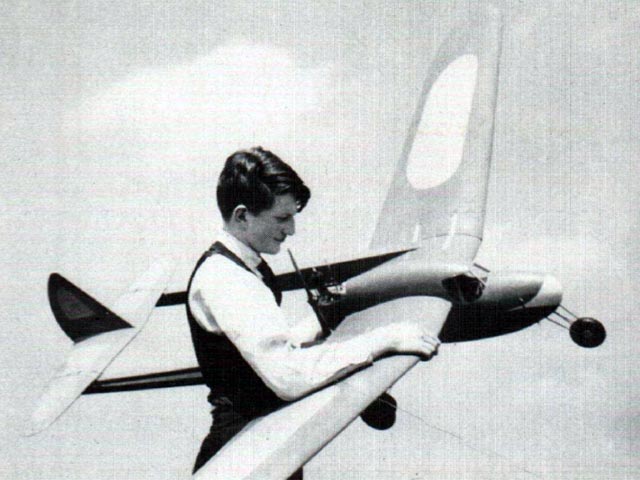 I have read a comment of Ben Shereshaw on the XP-3 in an old Aeromodeller. He adviced to anyone who's building this model to lengthen the nose in order to get the C.G. right because it is so tail heavy. Couldn' t find back back that Aeromodeller. It was in the 70's.
Hans - 07/12/2021
See build blog at: https://www.rcgroups.com/forums/sh...
pit - 07/12/2021
Add a comment