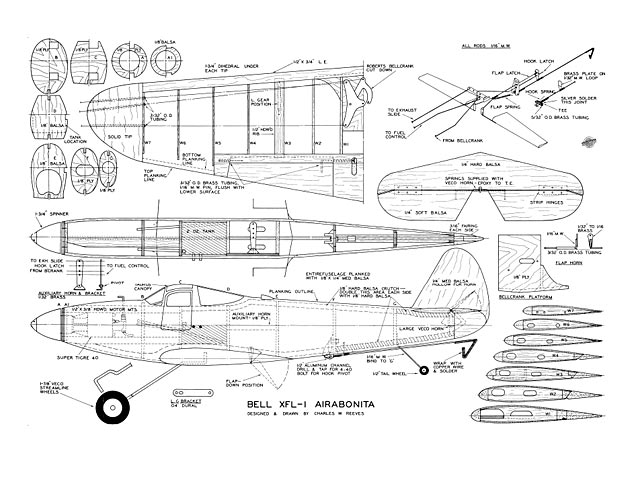 Quote: "Contest winning Class One Carrier machine of little known prototype Navy fighter. Using Airacobra parts, it was maneuverable but obsolete before it had a chance to prove itself.

In 1938, when the US Navy placed a contract with the Bell Aircraft Cor- poration for an experimental shipboard fighter, it is doubtful that they even thought about the possibility of using it as a Class I Navy-carrier model. In fact, they apparently didn't think too much of the full-size airplane because they only ordered one, and they flunked it out during the carrier's qualification trials! After it flunked these trials, it was returned to the manufacturers in 1941 for modifications, but it was decided that it was unsuitable for further development and the aircraft was discarded.

"It looks like an Airacobra to me!" "I thought the Airacobra had a nose wheel." "Mister, is that a Mustang?" Really now - the questions some peo- ple will ask!

To begin with, it is not an Airacobra, but it is basically similar to it, and was developed in parallel with the land-based XP-39. Like the other two famous Bell fighters, the Airacobra and Kingcobra, the Airabonita had the engine located behind the pilot, driving the propeller by means of an extension shaft. It differed, though, in that it had a tailwheel undercarriage with the main landing gear transferred to the front spar. An arresting hook was fitted, the vertical tail surfaces redesigned (from the XP-39) and the airframe was restressed for carrier operation. The Airabonita had provisions for two 0.3 inch machine guns in the nose and an 0.5 inch machine gun or a 37 mm. cannon firing through the propeller hub, although none of the armament was installed. This made it some kind of paper tiger then, didn't it?

If this glowing description hasn't already caused you to turn to the next page, see what you think of this model's qualifications as compared to the real plane's. If you look at all the current Class I carrier models, you will find that this one is by far the sleekest. It looks as if it is going a hundred miles an hour before it leaves the deck. In the three contests in which it was entered last summer, it took one first place and two second places. The slowest low speed recorded was 29 mph, and the fastest high speed was 103 mph. This low speed is expected to decrease (hopefully about 5 mph) with practice, and the high speed should increase with time as the motor loosens up and gains a few rpm's. If I can ever take some time off from my stunt flying to do a little experimenting with propellers, fuels, and glow plugs, this high speed will probably increase some more. Right now, I'll have to be content with a 9-8 Rev-up prop, Thimble Drome racing fuel (red can), and a standard long reach Fireball glow plug. Doesn't the model sound better than the real plane?

By looking very carefully at the plans and the pictures of the model, you will see that this plane is not intended to be a glider, so let's discuss the motor for a while. As soon as the first Super Tigre 40 R.V. came out, I bought one and set it back for the day when I would build a Class I carrier model. That is the engine that I have in this one, and the only complaint that I have about it is that it is about 3 ounces heavier than most other 40's..." 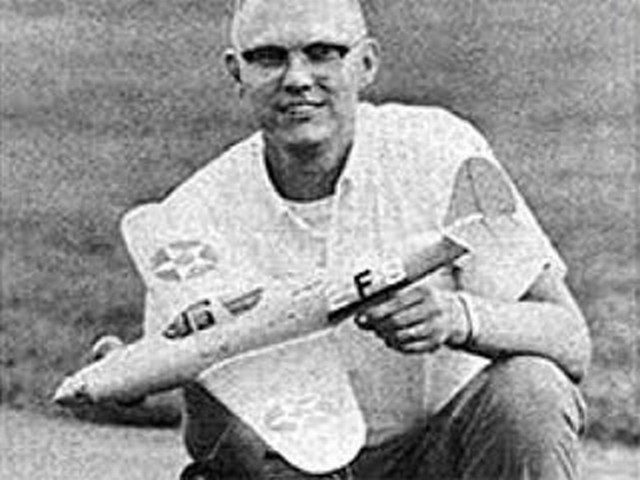